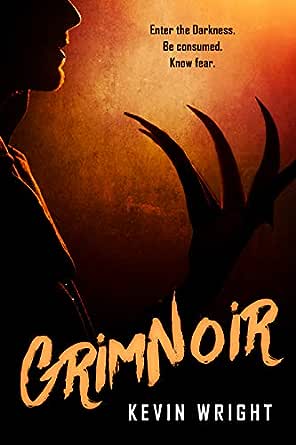 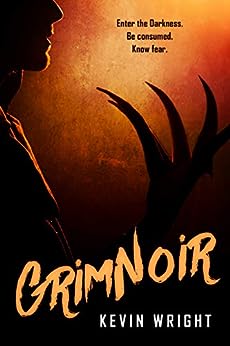 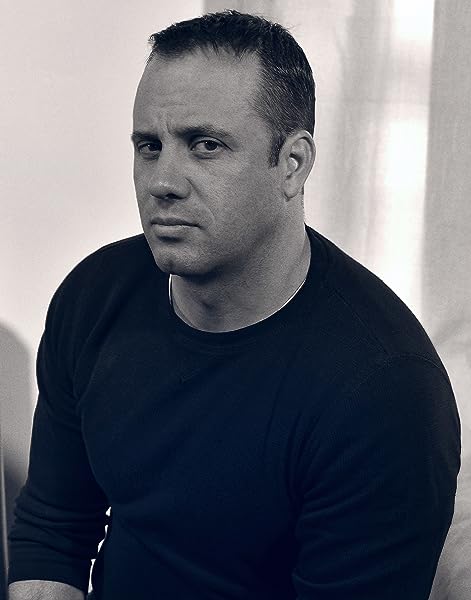 "GrimNoir excelled as a horror anthology. I would recommend it to anybody who likes horror fiction." -Cameron Kobes kobescwrites93.wordpress.com --This text refers to the paperback edition.

Kevin Wright studied writing at the University of Massachusetts in Lowell and fully utilized his bachelor's degree by seeking and attaining employment first as a produce clerk and later as an emergency medical technician and firefighter. His parents were thrilled.
For decades now he has studied a variety of martial arts but steadfastly remains not-tough in any way, shape, or form. He just likes to pay money to get beat up, apparently.
Kevin Wright peaked intellectually in the seventh grade.He enjoys reading a little bit of everything and writing sci-fi, fantasy, and horror. He does none of it well.
Revelations, his debut novel, is a Lovecraftian horror tale. GrimNoir is a collection of his best short stories, and Lords of Asylum is an insane detective fantasy. His mom really likes all of them even though she's never read any of them and wonders continually why he can't just write anything 'nice.'
Kevin continues to write in his spare time and is currently working on a sequel to Lords of Asylum tentatively entitled, The Hall of the Leper King. It's romantic comedy.
--This text refers to the paperback edition.

The Brazil Business
You must steel yourself, little brother, and listen, for I've a grim story to tell...
Your Dr. Scarsdale and I arrived in Rio de Janeiro on the first of August and ferried on up the coast then continued upriver to Cuiabá to commence our search. Imagine us, two proper Yankee gents stumbling about some sweltering jungle metropolis in the dim hopes of gleaning any hint or clue of Wilbur's clandestine trek and subsequent disappearance, months gone to dust. An impossible task, I recall myself saying to Scarsdale during our overseas debates. Heady days, those, when existed things I still thought impossible. Impossible? No, I give you a better word, inevitable. For not only did we garner a clue, but it was thrust neatly into our faces practically the moment we disembarked, plastered across the front page of some garish Cuiabá scandal sheet. It was Scarsdale who saw it. Like a hammer blow to the temple, it halted him stunned-dead in his tracks. The headline read: Cannibal Assassino! Accompanying this grim line, which even I had the wherewithal to translate despite my deficiencies in the local tongue, was one of those lurid portraits sketched in the pencil scribblings of some crude police artist; the face leering from the page, heavy-lidded and ominous, of high breeding laid somehow low, somehow degenerate. It was Willoughby.
There was no discussion about it. Without pause, Scarsdale and I notified the local constabulary. Sly smirking uniformed men, junta men, they considered our words, our motives, with the natural suspicion and contempt any of the natives hold for light-skinned outsiders, intruders. No doubt Willoughby's present activities had done little to assuage them on that score.
Coin of the realm loosened tongues, however. (Bribery seems a matter of course down here, being the sole comfort it shares with home.)
There were some rather gruesome details to the affair -- Jesus Christ -- I am not even referring to the cannibalism, for in my mind, at this time, it seems somehow mundane, somehow ... quaint, for lack of a better word. How far gone am I...?
--This text refers to the paperback edition.

Dear Reader,
GrimNoir comprises seven short stories I wrote after the birth of my son. To those who aren't new parents and haven't experienced the process, it can be overwhelming in many ways. One of the ways is time availability. Writing went out the window for me. I had started two separate novels and failed at both.
So I decided to stick with short stories for a time. These stories are the result of that decision.
They kept me moving forward as a writer when time constraints threatened otherwise.
I hope you enjoy them.
Kevin Wright
--This text refers to the paperback edition.

The Beast
THEY CALLED HIM THE BEAST behind his back. To his face, no one possessed the balls. No one. And this was something in the gulags. Once, some years past, I witnessed him murdering a guard. Manacled. He strangled him, nearly severing the man's head. So violent. So efficient. So impressive. In the midst of a gulag riot it occurred. Many suspected, but none knew, not for sure. Except me, and I did not talk. You didn't talk. You don't.
The Beast was different. To look upon him was to know this. Forget that he turned suka. Forget the stories. Just know that in the Thieves' World the Beast was marked to die, to have his Vor tattoos taken, and he didn't, and they weren't. His was a story of survival, of murder, of mad vengeance, a script of legendary reckoning etched by blade in scar tissue across his flesh. He had been hammered into something so compact and solid he appeared made of iron. A real girevik. The Beast. A killer born.
"How many has he killed?" they whispered. Many.
Suffice it to say he was dangerous. A more dangerous foe I could not conceive. Yet that is not why we killed him. That is why we killed him first.
--This text refers to the paperback edition.
Read more