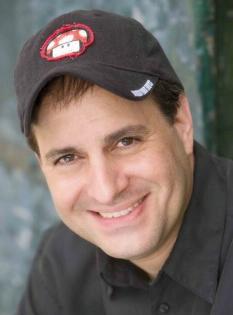 "Comet the Unstoppable Reindeer" by Jim Benton
It’s the night before Christmas, and Comet is ready…until he’s injured in an unexpected elf incident and replaced by a rookie named Freddy. | Learn more
click to open popover

D. J. Steinberg is an animation producer who has worked on classic animated films such as The Land Before Time, Hercules, Mulan, and Tarzan. He lives in Toronto, Canada. Brian Smith is an illustrator who has previously worked at Marvel Comics and Nickelodeon. He lives in Montclair, New Jersey.

JZuver
5.0 out of 5 stars Perfect conclusion to my 7 year old's favorite series
Reviewed in the United States on June 2, 2017
Verified Purchase
This series has been a winner for my son, and was the turning point in him getting excited about reading. As a conclusion to the series this delivered the fun story I expected, the fun art that draws my son in, and a great resolve to Kid Rid. 5 stars for all Daniel Boom :)
Read more
Helpful
Comment Report abuse

twinzmom
5.0 out of 5 stars The Kids Love These Books
Reviewed in the United States on December 6, 2010
Verified Purchase
We have all 4 books in the Daniel Boom series and my 8 year old girl/boy twins love them. The art is awesome and the literature is smart and entertaining. This is the perfect book collection for the kids who claim they don't like to read. The art will draw them in, and the writing will make them fall in love. My kids read them all cover to cover on the first day.
Read more
One person found this helpful
Helpful
Comment Report abuse

CSDNYC
5.0 out of 5 stars Terrific humour for young and old (er)!
Reviewed in the United States on February 7, 2016
Verified Purchase
My 9 year old nephew loved it!!! And it made me laugh, too!
Read more
Helpful
Comment Report abuse

PaynePhalen
5.0 out of 5 stars Great "for fun" read for elementary aged kids.
Reviewed in the United States on February 9, 2013
Verified Purchase
I am a teacher and I use this to give my students the joy of reading. It is good for grades 1-5, depending on reading level.
Read more
Helpful
Comment Report abuse

Leslie Estrada
5.0 out of 5 stars My son loves these books
Reviewed in the United States on January 18, 2015
Verified Purchase
My son loves the pictures and storyline of these books!
Read more
Helpful
Comment Report abuse

Book lover
5.0 out of 5 stars One of the best books ever...
Reviewed in the United States on August 9, 2010
Verified Purchase
All 3 of my kids love the "Daniel Boom (aka Loud Boy)" books. The plots in these graphic novels are action-packed and hilarious for kids, and surprisingly fun for adults. (I'll admit that I read them, also.) I haven't found books -- since Harry Potter -- that everyone in the family wants to read immediately!
Read more
One person found this helpful
Helpful
Comment Report abuse

Lori Calabrese
VINE VOICE
5.0 out of 5 stars It's not a bird, it's not a plane, it's Loud Boy
Reviewed in the United States on May 5, 2010
Who doesn't love a good graphic novel? Just as a picture book is an art form in itself, a graphic novel is as well. It's a difficult process to write in pictures and I can't even imagine the time and process that go into writing a graphic novel like Grow Up! #4 (DANIEL BOOM AKA LOUD BOY).

Grow Up, the fourth installment of the Daniel Boom books, features the superhero who has no volume control on his voice--hence, Loud Boy! And who are the other young heroes in the book? You have Chatterbox, Destructo-Kid, Tantrum Girl, and Fidget. Yes, the fact that Steinberg has created superheroes from habits that kids are usually disciplined for --whether it be talking too loud or too much, fidgeting, or destroying something-- is just pure genius.

The superheroes are at it again, but in Grow Up!, the all-kids crimefighting crew are acting like old people! It seems as though the mastermind behind K.R. Industries, Doctor Docter, comes up with a plan to sap their youth energy and turn them into senior citizens. Loud Boy is walking with a cane, Destructo Kid is crazy for bingo, Fidget is the new shuffleboard king of the senior center and Chatterbox is the one with the granny bag and beehive hairdo. But if you think the mastermind can beat our superheroes just because they're old, well, the world's about to change, amigo!

The writing is clever and funny and will keep young readers wanting more. I had to fight my four year old for the book, since he kept stealing it from me. I was really amazed at the bright, vibrant illustrations and could easily picture this as a cartoon. Steinberg is an animation producer who has worked on classic animated films such as The Land Before Time, Hercules, Mulan, Meet the Robinsons and Tarzan. And to team him up with Brian Smith, who has previously worked at Marvel Comics and Nickelodeon, you have quite a superhero duo when it comes to creating amazing children's books that will dominate the world!

Carla J
4.0 out of 5 stars Fun
Reviewed in Canada on August 14, 2013
Verified Purchase
My 2 boys loved reading this book over and over again.
Great art work as well!
Awesome fun read!
Thanks
Read more
Report abuse