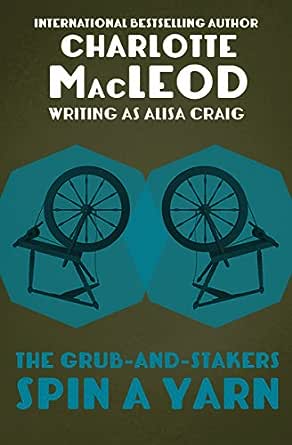 You've subscribed to The Grub-and-Stakers! We will preorder your items within 24 hours of when they become available. When new books are released, we'll charge your default payment method for the lowest price available during the pre-order period.
Update your device or payment method, cancel individual pre-orders or your subscription at
Your Memberships & Subscriptions
There was an error. We were unable to process your subscription due to an error. Please refresh and try again. 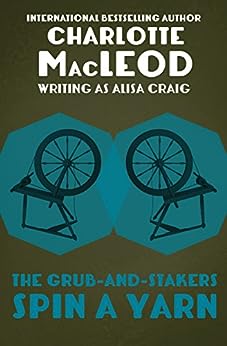 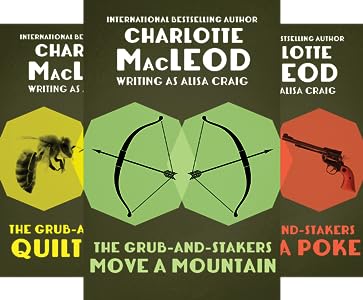 “A kitsch whodunit that overflows with witticisms, puns and mistaken identities.” —Publishers Weekly
“One of the most gifted mystery authors writing today.” —Sojourner: The Women’s Forum
“The screwball mystery is Charlotte MacLeod’s cup of tea.” —Chicago Tribune

Charlotte MacLeod (1922–2005) was an internationally bestselling author of cozy mysteries. Born in Canada, she moved to Boston as a child, and lived in New England most of her life. After graduating from college, she made a career in advertising, writing copy for the Stop & Shop Supermarket Company before moving on to Boston firm N. H. Miller & Co., where she rose to the rank of vice president. In her spare time, MacLeod wrote short stories, and in 1964 published her first novel, a children’s book called Mystery of the White Knight.
In Rest You Merry (1978), MacLeod introduced Professor Peter Shandy, a horticulturist and amateur sleuth whose adventures she would chronicle for two decades. The Family Vault (1979) marked the first appearance of her other best-known characters: the husband and wife sleuthing team Sarah Kelling and Max Bittersohn, whom she followed until her last novel, The Balloon Man, in 1998.

The latest from Charlotte McLeod, writing as Craig ( The Grub-and-Stakers Move a Mountain ), is a kitsch whodunit that overflows with witticisms, puns and mistaken identities; steady tongue-in-cheek narration keeps it from becoming cloying. Casting the members of the Lobelia Falls Grub-and-Stakers Gardening and Roving Club, the drama begins in Miss Jane Fuzzywuzzy's Yarnery, where an executive at the local mincemeat factory is murdered. Popular novelist Osbert Monk joins in the police investigation. The ensuing shenanigans are hilarious and cleverly conceived--at one point the criminals mistakenly abduct Osbert's aunt Arethusa instead of the murder victim's daughter, Matilda McCorquindale; to outsmart them, Osbert decides that Matilda should attend her father's funeral and pretend to be Arethusa pretending to be Matilda. McLeod threads the suspense surely, and although the quirky character names grow cumbersome, she keeps her story energetic and merry.
Copyright 1989 Reed Business Information, Inc. --This text refers to an alternate kindle_edition edition.
Read more

4.1 out of 5 stars
4.1 out of 5
15 customer ratings
How does Amazon calculate star ratings?
Amazon calculates a product’s star ratings based on a machine learned model instead of a raw data average. The model takes into account factors including the age of a rating, whether the ratings are from verified purchasers, and factors that establish reviewer trustworthiness.
Top Reviews

Kindle Customer
4.0 out of 5 stars Not Her Best, but good light reading
Reviewed in the United States on February 1, 2014
Verified Purchase
I suppose I have read all of her 'Sarah Kelling & Max Bittersohn Mysteries' series and a few other individual books, but had never encountered a representative of this 'just for fun" handful that seemed to have been produced 'just for fun'. This one has a neat trick at its heart, the remainder is simply a play of interactions among the key characters. At the current price of close to nine dollars, I find it difficult to recommend to the reader for whom cost is a consideration (like me); however, should it ever come up at a considerable discount, it would be quite suitable for a period in your week when you are unwilling to experience gore or tension, just want a handful of colorful characters who do not do very much but expose their idiosyncrasies with a 'who could have dun it' as the excuse for showing them in action. As usual, the writing is highly professional and appealing. (I was surprised and sorry to hear that she has been gone these nine years or so, regretful that her productive life was put to sleep with the hellish Alzheimer's disease, but happy to find that she was yet another of the many talented people born in Canada who have come South to the United States to ply their entertaining trades.)
Read more
8 people found this helpful
Helpful
Comment Report abuse

L. Snyder
3.0 out of 5 stars readable
Reviewed in the United States on February 12, 2013
Verified Purchase
I got a number of this series for about $1.99 each. If I hadn't already purchased them, I doubt I would have searched out others after I read the first one. The stories are good--but the dialog (especially the stilted supposedly Edwardian/Victorian sections) are unnecessary and annoying. If you can get past that--a fairly enjoyable read.
Read more
Helpful
Comment Report abuse

J. L. Hewes
3.0 out of 5 stars Cute Beach Read
Reviewed in the United States on July 26, 2013
Verified Purchase
These are the last of the McLeod's to add to my electronic collection. Not as good as the other 3 series, but funny and easy reads. Suspect Charlotte had tongue in cheek a lot with the "Grub and Stakers."
Read more
One person found this helpful
Helpful
Comment Report abuse

cranberrythimble
3.0 out of 5 stars fun mystery!
Reviewed in the United States on April 20, 2015
Verified Purchase
Fun 'cozy' mystery. Crazy characters. And, a tangential yarn-shop-related element. :) Hard to pinpoint the time when it takes place, which is fun.
Read more
Helpful
Comment Report abuse

Janice Glines
5.0 out of 5 stars Five Stars
Reviewed in the United States on June 7, 2015
Verified Purchase
So much fun I've already re-read it once and may once more this winter.
Read more
Helpful
Comment Report abuse

Tillysmam
1.0 out of 5 stars One Star
Reviewed in the United Kingdom on May 25, 2016
Verified Purchase
what an awful book, I gave up after 20 pages .
Read more
Helpful
Sending feedback...
Thank you for your feedback.
Sorry, we failed to record your vote. Please try again
Report abuse