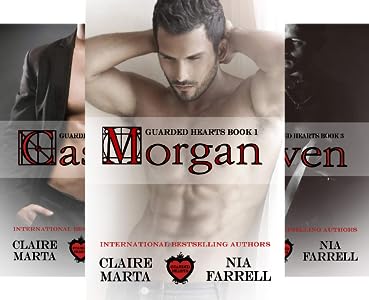 Morgan is the first in the Guarded Hearts Series of standalone Erotic Paranormal Romance Ménage deftly penned as subtle Romantic Comedy with a heat level that’s off the charts. Written for Ages 18+.
Read more
You've subscribed to Guarded Hearts! We will preorder your items within 24 hours of when they become available. When new books are released, we'll charge your default payment method for the lowest price available during the pre-order period.
Update your device or payment method, cancel individual pre-orders or your subscription at
Your Memberships & Subscriptions
There was an error. We were unable to process your subscription due to an error. Please refresh and try again.
All titles below are free to borrow with a Kindle Unlimited subscription.
Price: $14.95 for 5 item(s)
Sold by: Amazon Digital Services, Inc.
Items included: 1 - 5
Books in this series (7 books)
1
Morgan: Guarded Hearts Book 1
by Claire Marta (Author) and 3 more
4.4 out of 5 stars (23)
When grad student Morgan Leviss chose sexual surrogacy for her thesis, she never expected to become one. Now she’s tasked with turning two reclusive men into social creatures. Zac Blackstone and Aiden Goldman are nothing like what she expects. Handsome and charming, they’re a puzzle she finds intriguing.

2
Casey: Guarded Hearts Book 2
by Claire Marta (Author) and 3 more
4.4 out of 5 stars (13)
Malik Nassir and Iosefa Malvia are members of the Order of the Phoenix, an international cadre of shifters headquartered in a former military academy known as the Citadel. Charged with protecting the first fated mate of their brothers, the two become smitten with her roommate and best friend.

Casey Andersson is an ATF Special Agent who leads a double life. When Malik and Iosefa discover her secret—Casey is a submissive and a member of an exclusive club —they’re determined to learn how to master her.

Trouble is, she’s already being dominated by Master S (aka Ivan Michalov). They don’t know that the Russian Dominant has a secret agenda to claim Casey and keep her. Promising to help find her brother’s killer, Ivan leads her on a dangerous path into the heart of a deadly organization. Can Malik and Iosefa save her from the dark fate that’s already written out for her or will they be too late?

This second standalone book in the Guarded Hearts Series is a darker PNR shifter romance with potential triggers. MFM mènage written for Ages 18+.

3
Raven: Guarded Hearts Book 3
by Claire Marta (Author) and 3 more
4.7 out of 5 stars (9)
Unseen enemies threaten the newest fated mate and her child...

Nurse practitioner and midwife Raven O’Malley has no idea what she’ll be getting into when she takes on her newest client, who lives at the Citadel with not one but two handsome men. The other cadre members are equally attractive but it’s Cayden McPherson and Killian O’Connell who set their sights on her.

Raven has enough to deal with. A daughter, a puppy, a demanding job, and a mobster ex-husband. Now a blackmailer wants her to spy on the Citadel or she risks her daughter’s life.

The cadre members know there are forces of darkness to battle and evil exists in both worlds. Can Cayden and Killian protect the woman they love or will they lose her to enemies seen and unseen?

4
Riley: Guarded Hearts Book 4
by Claire Marta (Author) and 3 more
4.8 out of 5 stars (11)
Emmett and Theo fight to trust the woman who was forced to betray them...

Partners Emmett Marshall and Theophilus Khristos are kidnapped by a shadowy organization bent on learning their secrets. Taken to a private lab, they meet Dr. Riley Walker, the brilliant, beautiful geneticist charged with discovering what they are.

Or so it seems.

Theo and Emmett aren’t the only ones with something to hide.

The three are caught up in things they can’t control. Nefarious forces are at play. Unseen eyes are watching them. After Riley is forced to betray them, the feelings the partners have for the new female in their life take a twisted turn.

When truths are exposed, the whole cadre’s mission is put at risk. Emmett and Theo must fight for the woman who’s destined to be theirs or lose her to a dark, dark fate.

Darcy Takahara’s experience with dark forces puts her at odds with the men at the Citadel. With her cousin in their clutches, she’s not sure they can be trusted.

Driven by her own agenda, she accepts a teaching position at The Haven, a private boys’ school in rural New York. She’s on the trail of her ex-lover, Dr. Liu Chan, the former member of an elite secret order. Discovering him on staff at the school, she fears Liu is up to his old tricks.

Gaining the trust of those around her is imperative. Darcy does what she must to infiltrate their ranks and learn Liu’s secrets. When things take a devastating turn, she’s forced to seek the help of two men she’s been trying to avoid.

Zana Sasani and Lukas Schmidt have been watching Raven’s cousin for a while. The Asian beauty is feisty and strong, and they’ve both fallen head over heels for her.

The problem is she can’t be trusted. When circumstances force a wary truce, the men think they have their chance to win their fated mate. But Darcy’s mission is far from over. With an old enemy rising, the men must work quickly to aid her or risk losing her forever.


Shifters with a sci-fi twist, Guarded Hearts Season One (Books 1-7) follows members of The Order of the Phoenix. Each book in this interconnected storyline provides a happily-ever-after for the main characters. While the first book of Season One can be read as a stand-alone, the following titles will be more fully enjoyed and understood if they are read in order, beginning with Morgan (Guarded Hearts Book 1).

6
Sam: Guarded Hearts Book 6
by Claire Marta (Author) and 3 more
A psychic, an ex-priest, and two shifters walk into a bar…
But it’s no laughing matter. All hell’s about to break loose.


Gael Fournier is harboring a secret—one that threatens to jeopardize his brothers at the Citadel and their fated mates. Broken, scarred, he refuses to open up to anyone, especially his partner Elijah.

Unwanted, Elijah Marley fights to break through to Gael anyway. Watching him from afar, nothing he does seems to pierce the wall around the Frenchman’s heart.

One chance meeting brings them face to face with their fated mate, Sam Henderson, a psychic medium who talks to the dead. Gael’s hostile reaction drives Elijah into the arms of another whose destiny is linked to theirs.

Angry, alone, Gael unknowingly walks into the clutches of the monster who’s been stalking him the whole time. After Elijah is unwittingly thrown into danger, too, it's up to Sam and Father James Carver to race to the rescue of both men.

Not an easy task when their enemy is a vampire hell-bent on claiming and keeping what’s his….


Shifters with a sci-fi twist, Guarded Hearts Season One (Books 1-7) follows members of The Order of the Phoenix. Each book in this interconnected storyline provides a happily-ever-after for the main characters. While the first book of Season One can be read as a stand-alone, the following titles need to be read in order, beginning with Morgan (Guarded Hearts Book 1).

This title will be released on Jan 2, 2021.
7
Ash: Guarded Hearts Book 7
by Claire Marta (Author) and 3 more
On the run from her mobster stepfather, Ashlee Gabrielli knows to trust no one. When Ash stumbles through the gates of the Citadel looking for a place to hide, she has no idea the men here are shifters.

Tobias Santini is the leader of The Order of the Phoenix. The cadre’s superior has led his men and protected their women since the first fated mate was found. With everyone else in relationships, Tobias remains alone, serving as guardian to them all.

When he discovers Ash hiding in the garden, everything changes. She’s the image of a woman he loved and lost a lifetime ago, and she’s in trouble. Taking her under his wing, Tobias vows to protect her—even from himself when attraction sparks between them.

Ash is inexplicably drawn to the silver fox superior. Eventually, he reveals their past life connection, but he’s still keeping secrets. She has one, too, possessing a dangerous gift that no one foresees. With forces unfolding their insidious plans and a final showdown brewing, the men of the Citadel will need every ally they have to survive the wrath of the vampire Etienne. Yet even that might not be enough this time.

More About the Authors 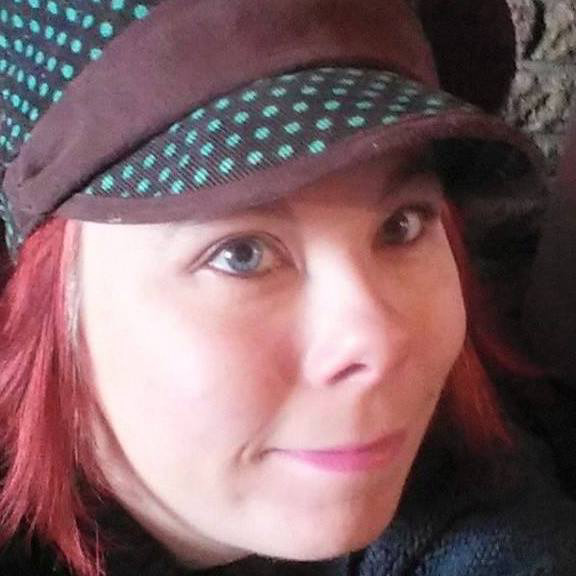 Claire Marta
Biography
International Bestselling Author Claire Marta. A native Brit, I live in Italy with my husband and daughter. When I am not writing and drinking copious amounts of tea, I enjoys taking photos of my adoptive country, trying to stay fit with running, reading amazing books and being a stay at home mother.

You can follow me for News and Updates on my books on my Facebook page: https://www.facebook.com/clairemartabooks/
Read more 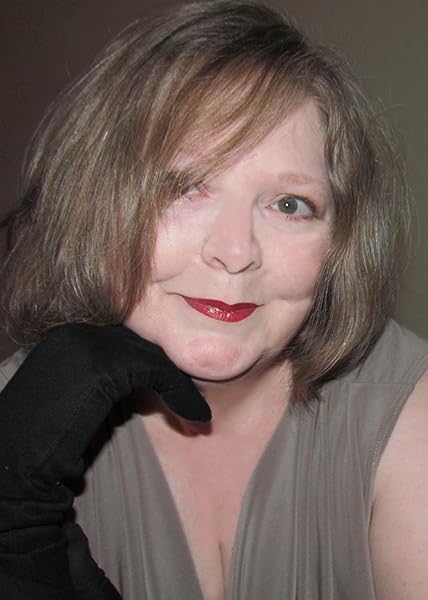 Her debut books from The Three Graces Series, Something Else, Something Different, and Something More, are kink with a paranormal twist. Soul mates, reincarnation, karmic fallout, shamanism, and psychic abilities come into play. Personal experience and extensive research go into crafting her characters, but it's her sense of whimsy that has made fictional Posey, Minnesota, the ménage capital of the United States with a Monty-Python-themed diner that's central to the plotlines.

Nia was fortunate enough to meet her soul mate early on. She married her high school sweetheart, raised two children, and began writing at her husband's suggestion. She has been published in erotica since 2015.
Read more
Back to top
Get to Know Us
Make Money with Us
Amazon Payment Products
Let Us Help You
EnglishChoose a language for shopping. United StatesChoose a country/region for shopping.