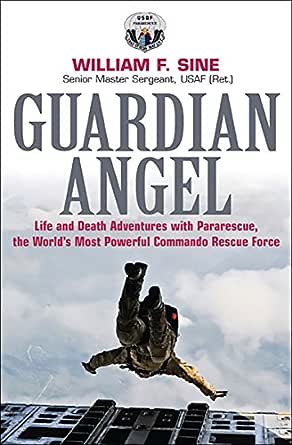 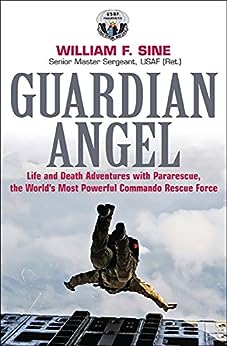 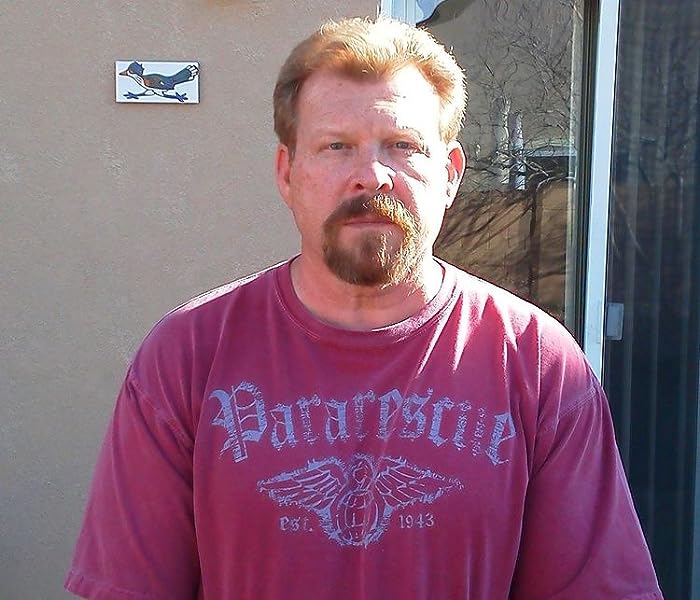 Book Review (Shortened by author to fit this format)
Reviewed by Jack Magnus for Readers' Favorite
Guardian Angel is William F. Sine's memoir of his service as a U.S. Air Force Pararescue Jumper, or PJ, as they are familiarly called. The rigors of training required of a PJ is not for everybody, as Sine explains in his introduction, but very few of those who are willing to try for a spot in this elite force actually make the grade. Those who do, become stronger, faster, and more resilient than they ever dreamed they would become.
Guardian Angel is a fabulous read, filled with heroism, history, and hi-jinks, as author William F. Sine recounts his life as an Air Force Pararescue Jumper. Sine was there in one of the Kobar Buildings when it was bombed and gives a harrowing, first-hand account of the event. There are also pictures of the building that will make any reader shake their head in disbelief that anyone could survive such an encounter. Reading this book will give you a history of an elite group of servicemen that few have ever heard of, unless you're involved with the Armed Forces yourself, in which case, you would have been quite pleased to hear a PJ was coming to help you out in an emergency situation. Sine's writing style is fluent and dynamic, helping the reader visualize the foreign places where he served and empathize with the PJs as they handle yet another daring rescue. It's good to know these men are out there doing what they do, and I'm very glad that William Sine was there to let the rest of us in on the details. I highly recommend this book.

Senior Master Sergeant Bill Sine entered the US Air Force after graduating from high school in 1975. He immediately volunteered for pararescue duty and completed the rigorous training in 1976. Sgt. Sine has more than 2,500 flying hours and is an accomplished military scuba diver, mountain-rescue instructor, and confine-space and structural-collapse technician. He retired from active duty in 2003 after twenty-eight years of distinguished service. Sgt. Sine’s decorations include a Distinguished Flying Cross. In 2005, he returned to the PJ community to become the first PJ instructor in history. He currently serves as the assistant director of pperations at the Pararescue and Combat Rescue Officer School, Kirtland Air Force Base, New Mexico.

4.5 out of 5 stars
4.5 out of 5
196 global ratings
How are ratings calculated?
To calculate the overall star rating and percentage breakdown by star, we don’t use a simple average. Instead, our system considers things like how recent a review is and if the reviewer bought the item on Amazon. It also analyzes reviews to verify trustworthiness.
Top reviews

J. Larsen
5.0 out of 5 stars An Amazing Book about the World's Most Elite Rescue Squad
Reviewed in the United States on August 19, 2014
Verified Purchase
If you’ve ever dreamed of what it’s like to be a real-life superhero, this gripping and exhilarating memoir by former PJ legend William Sine is as close as you’ll ever get without actually hurting yourself. As a member of the world’s most elite rescue squad for more than thirty-years, William Sine and his colleagues live a very uncommon but incredibly amazing and rewarding lifestyle in the select fraternity that is Pararescue. U.S. Air Force Pararescue teams see action in a variety of diverse and dangerous environments: From the sweltering jungles of the Philippines, to the malevolent seas and crevasses of Iceland, to the terror of experiencing the bombing of the Khobar Towers in Saudi Arabia and rescuing downed aircrews behind enemy lines in Afghanistan. This is the reality of what it truly means to live by the creed, “That Other’s May Live.”
However, the life of a PJ isn’t all adrenaline and testosterone, there are times spent training for future emergencies, customizing special equipment to rescue astronauts out at sea after reentry, outrageously funny moments with Pararescue teammates, and light-hearted family moments such as becoming a father for the first time and raising a rambunctious child as a single parent who eventually grows into a crazy young teen later on in life desperately in need of a stable and straight path into adulthood. If you loved Michael Hirsch’s “None Braver: U.S. Air Force Pararescuemen,” William Sine’s riveting memoir makes for a great companion book.

Dennis Johnson
5.0 out of 5 stars A well written and riveting book on a little known service, peopled by patriots and heroes.
Reviewed in the United States on September 9, 2017
Verified Purchase
I expected this to be more of a "self-published" memoir with the usual good stories but perhaps "rough" writing and a bit of self-aggrandizement. I was very pleasantly surprised that the writing is very very good with a fine balance between the story-telling and the personal reminiscences. Oh, and the stories! From the Afghan badlands to the Welsh highlands, from the Philippines to Florida, from Khobar Towers to NASA missions. The structure and the chapters made it an easy read - I could binge through 4 or 5 chapters, or just knock out one before falling asleep. It was difficult however to stop mid-chapter - I just wanted to know what happened. I heartily recommend this for folks who want an insight into the world of high powered, adrenaline fueled soldiers who live for their colleagues and those they go out to rescue.
Read more
2 people found this helpful
Helpful
Comment Report abuse

AlexanderLynn
5.0 out of 5 stars Best book I've read in my 17 years of life.
Reviewed in the United States on September 15, 2017
Verified Purchase
I chose to rate it 5 out of 5 for pure enthralling moments always keeping you on the edge of the seat. Making me get flustered when a teacher tells you to put your book away when tour trying to find out if a person lives or dies. But I also rated it 5 out 5 becuase it's educational, its aloud me to see more into the pararecue community in which I hope to be apart of. Sure the story changes alot from chapter to chapter but it's still highly detailed to the point where I almost thought I was reading a J.K. tolken book that's how much detail there was. It's a great read and it never gets boring I find. I've read another novel called none braver and it's similar but I would give the edge to William Sine in writing better content. All and all I would recommend spending the money just to read one chapter of this book thats how good it is and I enjoyed it. ( the chapter where he talks about his friend Rob Disney)
Read more
4 people found this helpful
Helpful
Comment Report abuse

zombinis3
5.0 out of 5 stars Good book
Reviewed in the United States on August 5, 2020
Verified Purchase
This book actually was a good read, alot of military books that I read can get to a point of being to dry. I have no problem reading about the military culture. Some arthurs get to much into the language of the branch using the many initials which have meaning for fellow personal, but don't bother telling the meaning of the letters. The few Mr Sine used were explained even though some of them are used on shoot em games. He did follow a set outline which was easy to go with. All in all it was enjoyable read.
Read more
Helpful
Comment Report abuse

Guy Bernard
5.0 out of 5 stars A hell of a story about a hell of bunch of guys
Reviewed in the United States on August 31, 2016
Verified Purchase
As an aircrew member I always knew you guys were there, fortunately I never found myself in need of your services.
My son is a PJ, and I now know who to attribute his "unique" outlook on life to .. LOL!

To those who read my review, my advice is -- YES, read this! In addition to being a good read, it is a peek behind a door that is damn tough to pass thru, show you that there is a place in this world for those who think it is reasonable to jump out of a perfectly functional airplane, and will introduce you to a team that the good Lord calls on to help him protect those who protect us.

Amazon Customer
2.0 out of 5 stars Not what I expected
Reviewed in the United States on November 30, 2020
Verified Purchase
I have a lot of respect for PJ’s. I expected this book to give some cool insight into the training and maybe some missions PJ take part in. While the book had some of this to a certain extent there where moments that were just completely ruined by what the author said. Like another review said on here though glad he has a high opinion of himself. One part of the book mentions something straight out of a cheesy action film, and seems like he wrote more about bar hopping in his deployments than the rescues that took place. If you’re looking for a PJ book I recommend Never Quit by Jimmy Settle. That one is better written in my opinion.
Read more
Helpful
Comment Report abuse

L. D.
5.0 out of 5 stars Hoo Yah!!!
Reviewed in the United States on October 22, 2012
Verified Purchase
Bill did an incredible job describing the exciting high speed, low drag life of a USAF Pararescueman. I could not put it down and I lived the life for nearly 20 years! This book brought back many good memories (and some bad) of an incredible career I wish I could relay as well as he did. When people ask me about that previous life I tell them, "it was like being in the boy scouts but without adult supervision and an unlimited budget". For any young man considering Pararescue, this is a must read. Great job, great book, excellent read!!!
Read more
57 people found this helpful
Helpful
Comment Report abuse
See all reviews

Romel B.
5.0 out of 5 stars Pararescuemen are really brave! That others may live!
Reviewed in Mexico on October 5, 2019
Verified Purchase
Pararescuemen rocks!! These men are truly angels!
Read more
Report abuse

Peter James Saunders
4.0 out of 5 stars Worth a read
Reviewed in the United Kingdom on January 8, 2013
Verified Purchase
I thoroughly enjoyed this book, it does give you an insight into the very mental world of combat medicine. Some stories so unbelievable that they must be true!
Read more
Report abuse
See all reviews