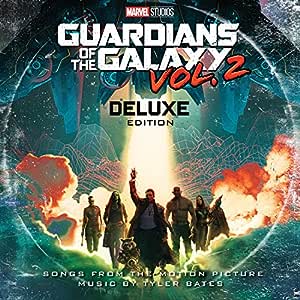 Obviously there was just too much awesome to pack into one volume! Guardians of the Galaxy: Awesome Mix, Vol. 2 two-disc vinyl edition is filled with favorite tracks, deep cuts and new music to use as a playlist while saving the galaxy.again! Featuring a genre-crossing compilation of artists including, Electric Light Orchestra, Fleetwood Mac, The Sneepers featuring David Hasselhoff and original music by Tyler Bates, Vol.2 is sure to be legendary. Vinyl will ship on or around release date of 8/11

4.8 out of 5 stars
4.8 out of 5
2,151 global ratings
How are ratings calculated?
To calculate the overall star rating and percentage breakdown by star, we don’t use a simple average. Instead, our system considers things like how recent a review is and if the reviewer bought the item on Amazon. It also analyzes reviews to verify trustworthiness.

Invader_Lex
1.0 out of 5 stars DON'T BUY!!! The new batch is defective.
Reviewed in the United States on June 22, 2019
Verified Purchase
there is a bump in the surface, the disc is printed off center. The other disc have a small indentation. The discs are dirty and scratched by the cheap paper they use for the sleeves is made of printing paper. The music sound ok with little hiss and cracks n pop after cleaning them. But there is a thum in the bump and in the indentation. The hole of one comes a little too small. The offcenter creates rumble. in conclusion looks cheap with a deluxe tag and a deluxe price I paid 25 and they change it to 19 now and I know why. They reduce the quality for the 19 price and I got a new one for the price of the old version. Many are hapoy with their purchase. The reduction in price is the only explanation for why this looks cheap, because it is.

Update 06/25/19
I got a replacement disc. The new disc is also printed with the same defect, see the picture. DON'T BUY, THEY REDUCE THE PRICE TO GET RID OFF THE BAD BATCH. wait until is fixed.

Studio OrangeTop Contributor: Photography
5.0 out of 5 stars We've got a Wham Bam Shang-A Lang
Reviewed in the United States on July 14, 2017
Verified Purchase
So here's the thing. The first time I heard the Volume 2 Awesome Mix, I honestly wasn't all that impressed. I chalked it up to just not being able to capture the magic of Volume 1.

But after seeing the movie several times, I've come to the conclusion that while Volume 1 might be an overall stronger mix of songs, Volume 2 actually fits with the movie better. And as such, it has really grown on me. And now here we are, and I'm listening to this soundtrack at least as often as Volume 1 - which is to say, if I need a go-to mix of music, this is it.

Matthew
4.0 out of 5 stars Excellent soundtrack/score! Disappointing finishing touches.
Reviewed in the United States on August 13, 2017
Verified Purchase
Let me be clear - I love this album and the score, but I'm disappointed in the delivery of the media (on the LP).

If you're a score purist, you'll be disappointed to know that unlike Vol. 1, the Awesome Mix is not contained to the first disc. The final two tracks spill over into the second disc, and I'm SO glad they're all included, but now it becomes an issue of track skipping if you just want to listen to the score. I'm also frustrated that there was no digital edition of the score included (Awesome Mix came with an AutoRip). I'm not paying an additional $10 on top of the $27 just to digitize the score.

As for the soundtrack and score, they are both absolutely fantastic. I figured there'd be no way for them to find the wonderful mix of pop music that worked so well in the first film, but they managed to do it again. It's a different movie, so I can't compare the two directly, as they are SO integrated into the film! I think lots of the reviews were hoping for a great mix without seeing the film, and rating it poorly, as it's very eclectic and more obscure than the first Mix. However, it just worked so well with the movie, and every track brings new right back to the accompanying scene.

The score really shines here.. Bates' first volume was not bad, but with the exception of a few tracks, it's forgettable. This one is truly magical. I suggest everyone see the film, and then check out the score / soundtrack. I will have this one on repeat for the next few weeks!
Read more

D.W.
5.0 out of 5 stars Great Music for a Great Movie
Reviewed in the United States on January 8, 2018
Verified Purchase
Short answer: Great playlist, love every song on the first vinyl.

Long Answer: I bought the vinyl and it came packaged really well. I was worried purchasing vinyls on Amazon during the holiday season because I know what it's like to be a mailman around this time. But my package arrived and was packed well.

Like I said above, I loved every song on this album. It's starts you off excited with Mr. Blue Sky by the Electric Light Orchestra and Fox on the Run by Sweet but then slows things down Lake Shore Drive and the Chain by Fleetwood Mac. Plenty of good songs on the first album and it ends with Father and Son by Cat Stevens which is my favorite song in the playlist.

The second vinyl is Flashlight by Parliament and Guardian Inferno which is a very cool but weird song. The rest of the songs on this vinyl are movie scores which are great but I only ever listened to in once. If you like movie scores, great! If not, well the deluxe was priced better than the standard so I feel like I got a better deal with two vinyls than I would've with one.

If you are like me and don't know a lot of these artists but really enjoyed the movie and the soundtrack, I would recommend looking into the other songs by them. My playlist has gotten huge since I bought this. Especially Fleetwood Mac.
Read more
8 people found this helpful
Helpful
Comment Report abuse

Jon rosa
5.0 out of 5 stars Even better than Vol. 1!
Reviewed in the United States on March 21, 2018
Verified Purchase
Awesome cassette of the soundtrack for Guardians of the Galaxy Vol. 2. The tracks all rock pretty hard, I think this second volume is even better than Vol. 1 was! Even if you DON'T have a cassette player this item is a sweet little piece of merchandise from the movie because it actually LOOKS like Peter Quill's tape! It looks just like an old "cheap" blank cassette and even has faux handwritten track listings on the cover. Great to listen to while you're hanging out or driving your spaceship around the galaxy
Read more
4 people found this helpful
Helpful
Comment Report abuse

Cody L Custis
5.0 out of 5 stars A great tour of 1970s AM radio
Reviewed in the United States on July 30, 2017
Verified Purchase
You like the massive hit movie. Now, the question is, should you spend the money for the soundtrack. The answer is a resounding yes. Guardians of the Galaxy Vol. 2: Awesome Mix is a salute to the AM radio of the 1970s. Be it a salute to LSD, or the quiet strumming of Cat Stevens, it's a fantastic collection of music. Plus, you can order it on cassette tape!
Read more
4 people found this helpful
Helpful
Comment Report abuse

Cara
1.0 out of 5 stars Defective and cheap
Reviewed in the United States on February 24, 2020
Verified Purchase
The records we received both had their holes drilled off-center. It’s subtle, but enough to keep them from playing correctly. Both records in the set had an oscillating effect while playing (play normally for a second then drag out slowly for another second before playing normally for another second and so on) . Also, we noticed that they were relatively flimsy. We have a pretty large vinyl collection and all of our other records have a more sturdy feel. Maybe these ones we received are counterfeit? In any case, the quality control is super disappointing and I feel like I lost in the “just buy it on Amazon” gamble (so much of what’s sold on Amazon anymore is garbage). To add insult to injury, we missed the return window by one day and now we’re stuck with them. Womp womp.
Read more
Helpful
Comment Report abuse
See all reviews

TomF
1.0 out of 5 stars Damaged
Reviewed in the United Kingdom on February 6, 2019
Verified Purchase
My daughter just took this out to play it after getting for her Xmas. As you can see clearly damaged. There is no button to click for returns so I guess a review it is.
Read more

1.0 out of 5 stars Damaged
Reviewed in the United Kingdom on February 6, 2019
My daughter just took this out to play it after getting for her Xmas. As you can see clearly damaged. There is no button to click for returns so I guess a review it is.
Images in this review

Tracy
2.0 out of 5 stars Cheap quality
Reviewed in the United Kingdom on February 23, 2019
Verified Purchase
This album is made cheaply, very thin quality, this reflects in the quality of sound produced. For the price I would have expected 180gm vinyl. very disappointing as the soundtrack is great.
Read more
Report abuse

Jean
5.0 out of 5 stars Brill
Reviewed in the United Kingdom on February 28, 2019
Verified Purchase
This was a gift and they loved it. Great vinyl. Simply great if you loved this movie or even if you haven't seen it. Great tracks.
Read more
Report abuse