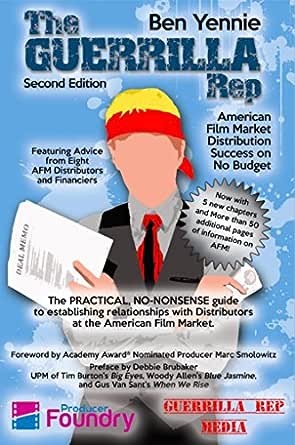 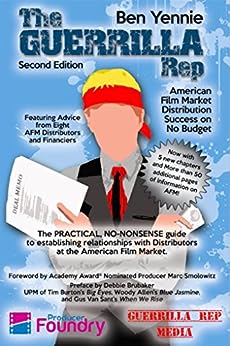 Yennie's book does a very good job at explaining all steps necessary to build healthy relationships with the key people in the film distribution business… you can easily apply these tactics to other film markets around the world. --~Scott McMahon

You should not go to any Film Market without first reading this book. --~Alex Ferrari,

#1 Filmmaking and IndieFilm podcast on iTunes.

[The] book to have at your side if you re heading to the AFM in November. --~Sheridan Tatsuno

Author of In the Valley of Digital Dreams: Untold Stories of a Silicon Valley Insider --This text refers to the paperback edition.

Ben Yennie is the founder and CEO of Guerrilla Rep Media, a producer s Representation and consulting firm. During AFM 2015, Ben Scored a 100% Offer rate for his clients. He is also Founder of Producer Foundry, a business school for independent film, and Co-Founder of ProductionNext a fully integrated cloud based project management solution for independent film. He s written for IndieWire , HopeForFilm.com, and Cinesource magazine. He s been featured on CNN Money, Indie Film Hustle, the the #1 Filmmaking and indie Podcast on iTunes, aswell as Film trooper, Indie Film Academy, and many more Podcasts. He is also the Authror of The Entrepreneurial Producer and co-hosts the Film Insight podcast. --This text refers to the paperback edition.

A. McKenna
4.0 out of 5 stars Clear & concise advice for AFM
Reviewed in the United States on March 25, 2019
Verified Purchase
Pretty straight forward information on all you need to know about attending the AFM. I've never been (may go this fall), but after reading Ben's book, I can clearly see it would easily prepare me. Easy, clear, great read.
Read more
Helpful
Comment Report abuse

Amazon Customer
5.0 out of 5 stars This book will convince you to attend AFM.
Reviewed in the United States on November 12, 2016
Verified Purchase
This book actually convinced me to attend the American film market. To be able to go into such a vital but inherently overwhelming and intimidating environment feeling armed and confident with really good advice and strategy made all the difference.
Read more
2 people found this helpful
Helpful
Comment Report abuse

Jason Ragosta
5.0 out of 5 stars Producers and Directors buy this book!
Reviewed in the United States on August 17, 2017
Verified Purchase
A concise crash course in surviving your first, second, and all the AFM's that will come after. I highly recommend this book to all filmmakers, Producers and Directors to get a better idea of the business half of the film business!
Read more
Helpful
Comment Report abuse

Writer/Producer/Director
5.0 out of 5 stars Great Insights into the American Film Market
Reviewed in the United States on August 23, 2018
Ben Yennie's "The Guerrilla Rep" (together with Heather Hale's "How to Work the Film & TV Markets") is one of the few resources available to independent film producers interested in navigating the American Film Market. With only 150-pages, the book is a quick and easy read. It contains a number of very useful suggestions, insights and recommendations. BTW: I also recommend reading and studying  Guerrilla Film Marketing: The Ultimate Guide to the Branding, Marketing and Promotion of Independent Films & Filmmakers ... another very helpful resource with dozens of helpful step-by-step instructions on how to create marketing and promotional campaigns and highly-effective posters, key art, teaser and trailers, IMDb listings, electronic press kits (EPKs) and many other marketing and promotional materials. Both books are highly-recommended. AAA+
Read more

Liz Moriarty
5.0 out of 5 stars Amazing resource for indie filmmakers because
Reviewed in the United States on June 26, 2017
Amazing resource for indie filmmakers because: A) The book holds deep insights into how the business of film distribution works; B) It helps the indie filmmaker decide IF the American Film Market is right for them (and why it may not be); and C) If your work is right for the AFM, this book provides insight and instruction on how to prepare for best results. Great stuff. Thanks, Ben!
Read more
2 people found this helpful
Helpful
Comment Report abuse

AC
5.0 out of 5 stars COMPREHENSIVE INTRODUCTION TO AMERICAN FILM MARKET
Reviewed in the United States on August 17, 2018
This is the book you truly need if you're interested in attending the American Film Market in Santa Monica -- everything is covered here, from which badge to choose, accommodation options, dress code, promotional materials to bring with you, business strategy, even where to network within the market itself. Written in a clear and concise style, this is the authoritative introduction to what you want to know before attending your first American Film Market or when trying to improve your business experience when returning.
Read more
Helpful
Comment Report abuse

Tim Forth
5.0 out of 5 stars No nonsense
Reviewed in Australia on July 17, 2019
Verified Purchase
Very practical
Read more
Report abuse
See all reviews