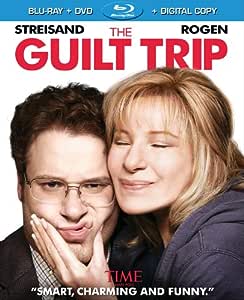 Andy Brewster is about to embark on the road trip of a lifetime, and who better to accompany him than his overbearing mother Joyce. After deciding to start his adventure with a quick visit at mom's, Andy is guilted into bringing her along for the ride. Across 3,000 miles of ever-changing landscape, he is constantly aggravated by her antics, but over time he comes to realize that their lives have more in common than he originally thought. His mother's advice might end up being exactly what he needs.

4.3 out of 5 stars
4.3 out of 5
5,701 global ratings
How are ratings calculated?
To calculate the overall star rating and percentage breakdown by star, we don’t use a simple average. Instead, our system considers things like how recent a review is and if the reviewer bought the item on Amazon. It also analyzes reviews to verify trustworthiness.

David H. Hanneman
1.0 out of 5 stars Unwatchable on most DVD players unless you are tech savvy
Reviewed in the United States on June 4, 2014
Verified Purchase
First things - The movie was great. Some people think the first half is boring or slow, and that is somewhat true, but this is not an action movie. I was pleasantly surprised that this Seth Rogen movie wasn't bad at all. My 1 star rating is for the piss-poor copy protection - which STOPPED ME FROM WATCHING ON A REGULAR DVD PLAYER! Yes, the DVD case even says "This DVD is copy protected"

Here was my basic experience:
Hmm, available used - like new. DVD arrived a few days later in the mail. Pop it out of the case to examine for scratches/smudges - looks pristine. Turn on TV, put the DVD in the player. Hmmm. Nothing happening? What the? Pop disc out and clean with rubbing alcohol and a cotton ball, despite having no smudges or scratches. Put it back in the DVD player - no luck. Pop it out and try it on my computer instead; computer sees the file structure, so tried to watch it. Nope - crashed the video player. Tried another computer. Nope, no luck there either. Attempt to copy folder to hard disk - error. Hmmm.

Fire up software to remove copy protection, then copy to hard disk. Works like a charm! Convert to MP4 file, connect computer to TV, and watch the MP4 on full-screen TV. FINALLY. What a waste of copy protection. Why sell a DVD that I can't even play in a regular DVD player? So again, as I stare at the back of the DVD case at the words "This DVD is copy protected", I am struck by the irony: forced to make a copy to watch it.

In the end what did this gain Paramount? A pissed off customer who had to resort to breaking copy protection. I wonder, would this DVD play on ANY DVD player?

Again, this was an excellent movie, so don't be put off by the 1 star rating. Instead, consider buying it in a format other than DVD.

Amazon Customer
5.0 out of 5 stars Feeling Guilty And Having Fun Cross Country
Reviewed in the United States on February 5, 2016
Verified Purchase
As we get older we tend to shy away from our parents but then we come back together with them again. This is a beautifully written story, perfectly acted by Barbara Streisand and Seth Rogen who plays mother and daughter. Andy (Seth Rogen) is a salesman that desires to pitch and sell a product that he has created, so he sets out on a cross-country quest to do this but asks, his mother, Joyce (Barbara Streisand) to come along. Even though Andy sees his mother as annoying he also wants to make a connection with her. During this journey he also decides to possibly drop by unexpectedly to see the father he never knew.

This is a great story. I have seen it several times and decided to purchase it finally.
Read more
4 people found this helpful
Helpful
Report abuse

The Sultry South
5.0 out of 5 stars Surprisingly funny, sweet movie
Reviewed in the United States on October 22, 2018
Verified Purchase
I figured this would be gross as most recent movies seem to be, but it isn't. As another reviewer noted, it's not really fast moving, but it is a very sweet, funny movie. I absolutely loved La Streisand in this. If you've never had kids or currently are a kid, this will probably bore you to oblivion, but it should resonate with everyone else. Even Hubs likes it (or he is pretending and hanging on until he can switch to football) Give it a shot. At under $5, give up one Starbucks for this.
Read more
3 people found this helpful
Helpful
Report abuse

Zinnia
5.0 out of 5 stars Barbra at her best. A fun emotional ride!
Reviewed in the United States on September 16, 2015
Verified Purchase
It's NOT 'hilarious!' It's much deeper and more touching than that, (though there are many parts that will make you laugh out loud!)
You will be tempted to 'tune out' when Mom (Barbra) begins her non-stop dialogues, but don't--hang in there. She is desperately trying to 'matter' to her son in the only ways she knows how. Her son would like nothing better than to stay as far from her and her incessant phone calls as possible.
The only reason he invites her on the road trip is to, hopefully, connect her with her old boyfriend so he can be rid of her. There is anger, despair, frustration and sorrow here that only Barbra could portray so forcefully. This is a 'girl' picture. It takes listening -- with the heart.
Read more
3 people found this helpful
Helpful
Report abuse

David Seaman
5.0 out of 5 stars A brilliant surprise
Reviewed in the United States on February 22, 2015
Verified Purchase
This film is packaged to look ordinary; a date movie. The title, "The Guilt Trip" adds to that, whereas the title has several possible meanings. Then the cast: Barbra Streisand and Seth Rogen, two of our most versatile and confusing actors, one gets into this film expecting a typical, safe Hollywood comedy where all the best bits are in the trailer.
Instead we get a script as clever as something Sorkin would write and we see two of the finest performances these two have ever given.
Rogen is a remarkable actor, making every moment honest and in no way a catagory actor. He's a character actor who belongs in lead rles like Dustin Hoffman or Meryl Streep. And his Oscar is coming. He plays Andy, an unmarried scientist who is marketing a new green cleaning product. He's set up pitch meetings at corporations from New York to San Francisco. His ability to wow them in the board room is like Rosie O'Donnell ballroom dancing with Woody Allen. No one's buying it. But he's got a heart of gold and Rogen's eyes show it with every blink and every blush. He has arranged to take this cross country trip with his mother, a widow since Andy was a boy, and she nags him about finding a nice girl as much as he nags her to find a nice man. Rogen's in the A list here, in a two character film with a living legend and he not only makes it look easy, he knocks it out of the park.
Then there's Streisand who, in the course of a 50 year career as a superstar never delivers exactly what we expect. We've seen Streisand from "Hello, gorgeous" to "Eunice? That's a person named Eunice??" We know to expect high quality from Streisand no matter what she does and occassionally it gets too easy to just expect that.
So Barbra Streisand in "The Guilt Trip." Delivers top quality again but we're surprised because we don't get what we expected and we see a pure character we've never seen before.
Streisand also acts with her eyes, so pairing her with Rogen (the two are executive producers) is sheer brilliance but more so we didn't expect it. Her performance here is Oscar worthy, as has been much of her work, though her last Oscar for acting was "Funny Girl" in the 60's, even after Billy Crystal's very obvious slam to the Academy when "The Prince of Tides" was nominated for seven Oscars except Streisand as best director. (In a fantastic musical opening to the tune of Jule Styne's "Don't Rain On My Parade " he sang:
"Did this film direct itself?"
All four major awards went to "Silence of The Lambs" that year but in 1991 it became clear, by failing to nominate her at all as director, producer and actor, that the Academy was not going to nominate Streisand.
Since then there was no other definative evidence but with "The Guilt Trip" it's clear that to overlook her performance was intentional. That's how good she is. Streisand plays Joyce, Rogen's mother, and she is comfortable within the parameters of her simple life but this cross country trip pulls her out of her comfort zones and she becomes very vulnerable yet stronger.
In their rental car she has brought Jeffrey Eugenides' "Middlesex" book on CD, a brilliant novel about a hermaphrodite who struggles to become whole. The choice of this award winning novel is apt and not at all an accident. Both mother and son have duplicitously, though innocently, arranged for the other to reunite with their first love and it is the power of these meetings, the truths that unfold and how brilliantly these two actors pull it off that makes this film remarkable.
As the trip unfolds so does their relationship and we find bits of ourselves in them as a parent; as a child. The film is about love but more so about unity. There are some wonderful moments of hilarity but the beautiful honest moments are what makes this film a delightful surprise. We're not watching Streisand and Rogen, we're with Andy and Joyce Brewster.
And we're with them all the way. This is an excellent film that's about something.
Read more
One person found this helpful
Helpful
Report abuse
See all reviews

Ms. Bhavna Raithatha, Counsellor
1.0 out of 5 stars Why?? Enough is enough...!
Reviewed in the United Kingdom on August 7, 2019
Verified Purchase
Utter, stereotypical rubbish. I love Barbra Streisand more than I can say, but I had to switch off half way having run out of any more cringing. This on the back of an equally cringe worthy and expensive Hyde Park concert of a lifetime that wasn't. Save your pennies and watch it on prime.
Read more
One person found this helpful
Report abuse

KennyF
5.0 out of 5 stars Worth having!
Reviewed in the United Kingdom on April 29, 2019
Verified Purchase
Not watched the DVD but I love the movie, I’m sure you will too. Bought for my collection.
Read more
2 people found this helpful
Report abuse

Mary C
5.0 out of 5 stars Excellent film
Reviewed in the United Kingdom on September 16, 2019
Verified Purchase
I thoroughly enjoyed this film! My son and two grandsons thought it was hilarious, probably more so, because it reminded them so many times of the relationship between me and my son. It was also very poignant at times, as in real life, so, all in all, a winner for all ages.
Read more
Report abuse