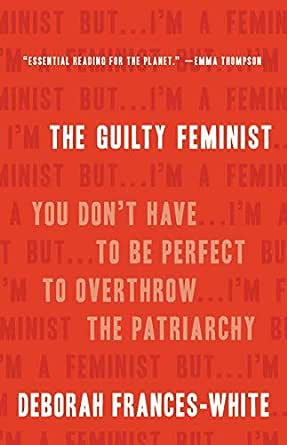 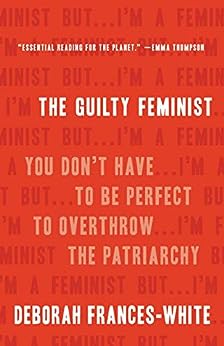 The Guilty Feminist: You Don't Have to Be Perfect to Overthrow the Patriarchy Kindle Edition

"Essential reading for the planet."

This really is the 'everything you have always wanted to know about feminism but were afraid to ask' manual. Essential reading for the planet.-- "Emma Thompson"

Her 'Open Letter from the Gentlemen of Hollywood, ' a riposte to the Weinstein saga, is worth the cover price alone.-- "Sunday Times"

With a distinct, lively, and consistently hilarious delivery, Frances-White upends common misconceptions-feminists, she assures readers, can love lipstick and men-and encourages readers to do what you can, when you can to end oppressive power structures. Feminists of any stripe will be moved by this rousing, funny, highly appreciative exhortation to 'smash the patriarchy like a strong, green, healthy plant breaking through the foundations of an old house.'-- "Publishers Weekly"

This high-energy book reminds readers about the origins of feminism and how important it is for women to support each other.-- "Booklist" --This text refers to an alternate kindle_edition edition.

Deborah Frances-White is a stand-up comedian and the host of the hit podcast The Guilty Feminist, which has had sixty million downloads in three years. She regularly appears on television in the UK and has her own BBC Radio 4 series,
Deborah Frances-White Rolls the Dice, which won the Writers' Guild Award for Best Radio Comedy. An official ambassador for Amnesty International, she lives in London.

Adjoa Andoh is an Audie Award and Earphones Award-winning narrator and an actress of British film, television, stage, and radio. She is known on the UK stage for lead roles at the RSC, the National Theatre, the Royal Court Theatre, and the Almeida Theatre, and she is a familiar face on British television. She made her Hollywood debut starring as Nelson Mandela's chief of staff, Brenda Mazikubo, alongside Morgan Freeman as Mandela in Clint Eastwood's Invictus.

4.7 out of 5 stars
4.7 out of 5
381 global ratings
How are ratings calculated?
To calculate the overall star rating and percentage breakdown by star, we don’t use a simple average. Instead, our system considers things like how recent a review is and if the reviewer bought the item on Amazon. It also analyzes reviews to verify trustworthiness.
Top reviews

Tony Eaglestone
5.0 out of 5 stars Fascinating Read and good learing tool
Reviewed in the United States on October 20, 2018
Verified Purchase
From the podcast of the same name. A great read that has a lot to interest, inspire and teach anyone with an interest in feminism. Especially good learning tool of you are a guy wanting to get a good understanding of how the world works for women while being able to support and enable them to speak out. There are a lot of things here that will make you go 'oh that's what that is'. If you are a fan of the podcast this is a good add-on to it. And if you haven't listened to the podcast, check that out too while you're at it.
Read more
One person found this helpful
Helpful
Comment Report abuse

Amy kyle
5.0 out of 5 stars Every woman needs to read this book - probably men too, but for sure women
Reviewed in the United States on February 22, 2019
Verified Purchase
Deborah Francis-White hits the perfect cord between a woman's "noble goals to our worst hypocrisies". It's the balance between not believing we should have to wear spanx, with knowing our favorite outfit looks best while wearing them. Her book - AND PODCAST - will wake you up and soothe your soul. SHE is the voice we've been looking for. Funny and insightful - buy the book today and listen to every podcast she's ever done. (also called - The Guilty Feminist) Cannot recommend more highly.
Read more
Helpful
Comment Report abuse

t r
5.0 out of 5 stars Guilty Feminist For Life!
Reviewed in the United States on August 20, 2019
Verified Purchase
Deborah Frances White is intelligent, insightful and hilarious! I am devoted to her podcast and look forward to it starting out my week every Monday morning! I was so excited to hear she was coming out with a book! She and all of her amazing guests have helped to open my eyes and heighten my awareness of so many social issues that affect all of us today. Her book is an incredible extension of her podcast, and I highly recommend both!
Read more
Helpful
Comment Report abuse

Sarah
5.0 out of 5 stars More Detailed and In-Depth Version of the Podcast
Reviewed in the United States on November 27, 2018
Verified Purchase
Easy to digest and funny, yet still informative and insightful. Truly a great read, for feminists, those on the brink of feminism, or feminist agnostics. I'm a feminist, but I just used the term "feminist agnostic" like an unabashed heathen.
Read more
2 people found this helpful
Helpful
Comment Report abuse

Nicole
5.0 out of 5 stars So funny!
Reviewed in the United States on November 30, 2018
Verified Purchase
Love the podcast and you will love this book super funny even if you've never heard the podcast highly recommend
Read more
2 people found this helpful
Helpful
Comment Report abuse

Scott A Faulk
5.0 out of 5 stars Intersectional feminists unite!
Reviewed in the United States on November 17, 2018
Verified Purchase
A must-read. From the UK comes a book that “unpacks” the patriarchy in an enjoyable read, demonstrating how the patriarchy continues to operate in modern society and how women can come together through intersectional feminism and rewrite the history of the world.
Read more
Helpful
Comment Report abuse

Kindle Customer
5.0 out of 5 stars Great read!
Reviewed in the United States on September 18, 2020
Verified Purchase
Funny, insightful and unapologetic! This book made me laugh, think and learn how to do more for myself and other women.
Read more
Helpful
Comment Report abuse

Janneke Dobben
5.0 out of 5 stars Incredible ACCESSIBLE feminism!
Reviewed in the United Kingdom on September 24, 2018
Verified Purchase
This book is brilliant. Easy to read, funny, eye-opening - could it be the seminal feminist text of the 21st century? Well, it's definitely got my vote.

I've been listening to the podcast for a couple of years, and so in that awkward way that you get with people you follow but actually have never met - I feel like Deborah is my friend, and honestly, I'm so proud of her for the achievement of this book! Wow, this sounds even more lame when you write it down. Ah well!

Right, now to go and politely encourage all my friends and family to read it too.
Read more
34 people found this helpful
Report abuse

Gemma
5.0 out of 5 stars In short: BUY. THIS. BOOK. It should be part of the damn curriculum...
Reviewed in the United Kingdom on September 21, 2018
Verified Purchase
Listeners of The Guilty Feminist podcast (note to non-listeners: it's utterly brilliant, give it a go), will know just how good this book is likely to be. And it is THAT GOOD. Empowering, insightful, shocking and at (pretty frequent) moments rant-iducing, it's worth every moment. Incorporating some of the most powerful narratives shared on the podcast, these incredible personal stories and more are curated just as beautifully, articulately and intelligently as you’d expect from the phenomenal DFW. Excellently researched; hugely powerful stats, essays and interviews with former guests and friends are all woven together into this powerhouse of a book. I’m with Emma Thompson when she says it’s “essential reading for the planet". Talk about the power of women; talk about the power of words. Now is the time for action. Buy it. Read it. Tell everyone you encounter to do the same. And take action. Don't be a bystander. If this book leaves one thing with you (and I promise you it will leave you with literally ALL the things), it's that to see change, you have to lead it; you have to be it.
Read more
19 people found this helpful
Report abuse

Terence Eden
5.0 out of 5 stars Powerful
Reviewed in the United Kingdom on June 3, 2020
Verified Purchase
A fantastic book. Even if you’ve listened religiously to The Guilty Feminist Podcast, or seen the author’s solo shows, there’s plenty of new material in here.

It’s a powerful and inclusive piece of work. Even if you think you know everything there is to know about modern feminism, I guarantee you’ll find something new – and breathtaking – in there.

It’ll get you angry, fired-up, and hopeful for the future.

I stopped highlighting passages halfway through, because it feels like every other sentence could be pasted on a t-shirt.
Read more
6 people found this helpful
Report abuse

Madhu
5.0 out of 5 stars Fantastic - loved the practical tips
Reviewed in the United Kingdom on November 26, 2018
Verified Purchase
I have been listening to the Guilty Feminist podcast for the last few months and really enjoyed it so decided to buy the book and what a great decision. The book has the right mix of comedy and practical information/advice delivered in Deborah’s classic ‘no nonsense’ style. Highly recommended reading for everyone!
Read more
7 people found this helpful
Report abuse

J
5.0 out of 5 stars For everyone
Reviewed in the United Kingdom on November 14, 2018
Verified Purchase
Whether you’re a die-hard feminist who already listens to this podcast every week, or new to the whole thing with no interest in podcasts, this book is amazing.

It’s accessible at all levels and thoroughly interesting and enjoyable to read. I’d particularly love to see an extended edition of the final chapter which looks at the appeal behind the ‘guilty’ pleasures that sometimes make us feel like bad feminists.
Read more
6 people found this helpful
Report abuse
See all reviews