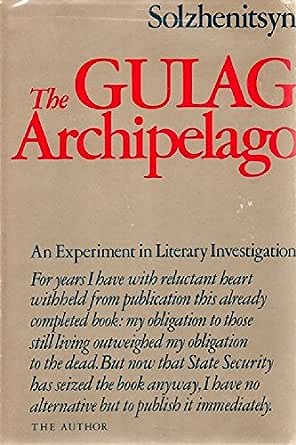 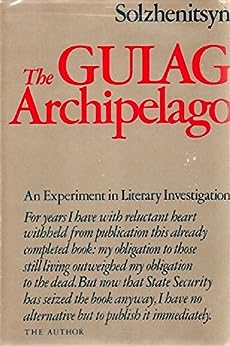 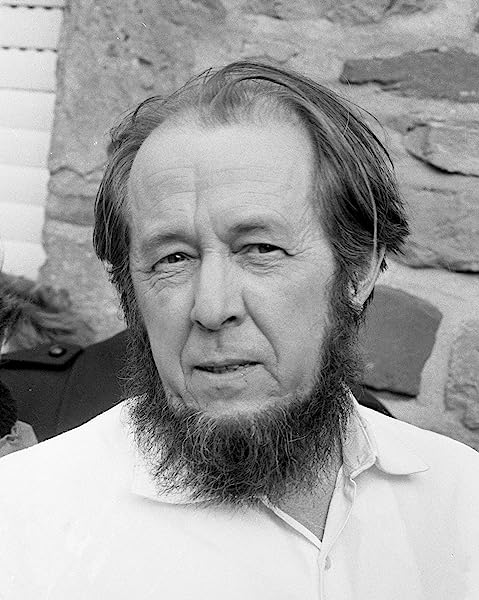 This book is currently unavailable because there are significant quality issues with the source file supplied by the publisher.

The publisher has been notified and we will make the book available as soon as we receive a corrected file. As always, we value customer feedback.

“The greatest and most powerful single indictment of a political regime ever leveled in modern times.” (George F. Kennan)

“It is impossible to name a book that had a greater effect on the political and moral consciousness of the late twentieth century.” (David Remnick, The New Yorker)

“Solzhenitsyn’s masterpiece. ... The Gulag Archipelago helped create the world we live in today.” (Anne Applebaum, Pulitzer Prize-winning author of Gulag: A History, from the foreword)

Ang
5.0 out of 5 stars Who else is here because of Jordan Peterson?
June 5, 2017
Format: PaperbackVerified Purchase
Talk about an eye opening experience. How did we not learn any of this in school? Shame. The imagery of the sewer system flushing the perceived worthlessness of life is a heartbreaking one. I'm a third of the way through the book. It's hard to read but entirely necessary.
Read more
1,060 people found this helpful
Helpful
Comment Report abuse

RdgJr near NYC
5.0 out of 5 stars Be SURE to get the hardcover version because the paperback does not include the author's notes
April 30, 2016
Format: HardcoverVerified Purchase
The hardcover version includes, at the bottom of many pages, the author's notes. These notes should be considered an essential part of the book. They are interesting and designed to enhance and embellish the text. Do not purchase the paperback version, because it does not include those essential notes by the author.

Obviously, this book (in hardcover form with the notes) is essential reading-- everyone who is able should invest the time to absorb this important, very moving, stereotype-shattering, great/classic work of non-fiction. According to Wikipedia, since 2009 this book (in Russian) has been required reading by Russian high school students (in Russia).

This is not true. This version, the red-covered Volume 1 of the Gulag Archipelago DOES have authors notes, and lots of them. However, the abridged version which is by the same publisher and has a similar cover to this book, does not have author's notes obviously. Just clearing up this confusion. This Volume 1 does have the original author's notes.
Read more
174 people found this helpful
Helpful
Comment Report abuse

PlayingThePonzi
5.0 out of 5 stars A must-read for students of history, politics and/or psychology
February 7, 2017
Format: Kindle EditionVerified Purchase
A must-read for those of us raised in comfort. A reminder that life needn't be (and through most of human history, wasn't) so comfortable. It is a reminder of the dangers posed by Authoritarianism, and a lesson that "evil" is not "out there" somewhere, lurking in a foreign land, but swirling amidst the "good" in the heart of every man. The vagaries of fate and disposition can leave any man as either executor or executed... or both at different times.

"If only there were evil people somewhere insidiously committing evil deeds, and it were necessary only to separate them from the rest of us and destroy them. But the line dividing good and evil cuts through the heart of every human being. And who is willing to destroy a piece of his own heart? During the life of any heart this line keeps changing place; sometimes it is squeezed one way by exuberant evil and sometimes it shifts to allow enough space for good to flourish. One and the same human being is, at various ages, under various circumstances, a totally different human being. At times he is close to being a devil, at times to sainthood. But his name doesn't change, and to that name we ascribe the whole lot, good and evil. Socrates taught us: Know thyself! Confronted by the pit into which we are about to toss those who have done us harm, we halt, stricken dumb: it is after all only because of the way things worked out that they were the executioners and we weren't.”

“Ideology—that is what gives evildoing its long-sought justification and gives the evildoer the necessary steadfastness and determination. That is the social theory which helps to make his acts seem good instead of bad in his own and others' eyes, so that he won't hear reproaches and curses but will receive praise and honors. That was how the agents of the Inquisition fortified their wills: by invoking Christianity; the conquerors of foreign lands, by extolling the grandeur of their Motherland; the colonizers, by civilization; the Nazis, by race; and the Jacobins (early and late), by equality, brotherhood, and the happiness of future generations. Thanks to ideology, the twentieth century was fated to experience evildoing on a scale calculated in the millions. This cannot be denied, nor passed over, nor suppressed.”

“There is a simple truth which one can learn only through suffering: in war not victories are blessed but defeats. Governments need victories and the people need defeats. Victory gives rise to the desire for more victories. But after a defeat it is freedom that men desire—and usually attain. A people needs defeat just as an individual needs suffering and misfortune: they compel the deepening of the inner life and generate a spiritual upsurge."
Read more
136 people found this helpful
Helpful
Comment Report abuse

SLG
5.0 out of 5 stars Must Read
May 10, 2017
Format: PaperbackVerified Purchase
This is a must read and should be required reading at the universities. Young people need to understand that it is important to truly understand the ideologies that you latch on to as they have very real consequences.
Read more
108 people found this helpful
Helpful
Comment Report abuse

Victor J. Taberski
5.0 out of 5 stars Crushing history of Soviet Russia and analyssi of human nature
December 22, 2017
Format: PaperbackVerified Purchase
Read this book. It is one of the most powerful things ever written. It acts as a history of Soviet Russia, and a insightful depiction of Soviet the process of arrest in Soviet Russia. This Volume of The Gulag Archipelago covers the process of Arrest, the Corrupt courts, the various statutes under which people were charged as well as many stories about people within the Soviet system. Their triumphs and their depravities.

Solzhenitsyn calls the book "An Experiment in Literary Investigation", and there really isn't a better way to refer to it. Due to the lack of available documentation Solzhenitsyn was forced to piece all of this information together from official soviet propaganda, books which had been banned that he was able to get his hands on, and the personal account of many, many people.

The second aspect of the book, and perhaps the more powerful one is the Book's analysis of the nature of humanity. IT is difficult to summarize this aspect, but the ideas contained herein deserve consideration.

Please read this book, if you read it seriously it may give you insights into human nature that you need.
Read more
59 people found this helpful
Helpful
Comment Report abuse

Walrus 305
5.0 out of 5 stars One of the greatest tragedies in the history of mankind
February 28, 2016
Format: PaperbackVerified Purchase
One of the greatest tragedies in the history of mankind, period. The Soviets outdid Hitler and imprisoned and killed around 14 million of their own people. It's mind boggling! And it's true. Sadly, it's still happening, on a much smaller scale, but this system is still in use to this day. Solzhenitsyn has done a wonderful job of collecting numerous prisoner accounts and turning them into a very readable series of literature, despite the danger it brought to him and those close to him. He will always be a hero of mankind, in my eyes.
Read more
139 people found this helpful
Helpful
Comment Report abuse
There are 318 customer reviews and 369 customer ratings.
See all 318 customer reviews
Write a customer review