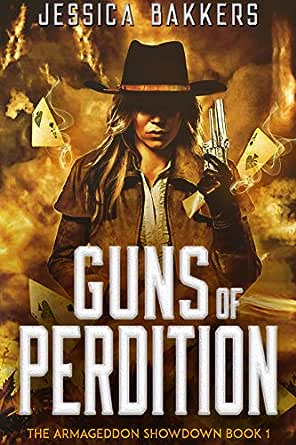 You've subscribed to The Armageddon Showdown! We will preorder your items within 24 hours of when they become available. When new books are released, we'll charge your default payment method for the lowest price available during the pre-order period.
Update your device or payment method, cancel individual pre-orders or your subscription at
Your Memberships & Subscriptions
There was an error. We were unable to process your subscription due to an error. Please refresh and try again. 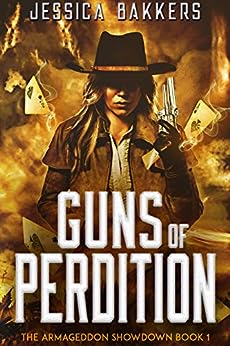 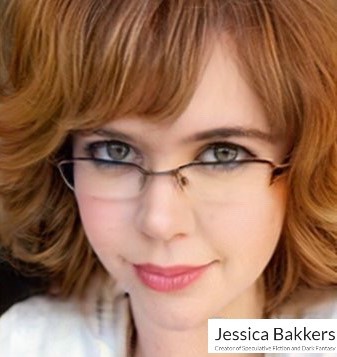 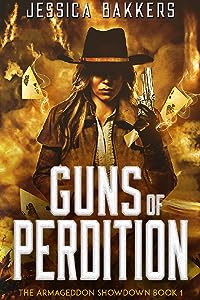 Robbie Cheadle
5.0 out of 5 stars Well written and clever
Reviewed in the United States on October 5, 2020
Verified Purchase
The only other book I've read that would seem to fit into this genre is The Dark Tower series by Stephen King. His books did come to my mind, once or twice, while I read about this strange and frightening Western-based world created by Ms Bakkers.

Jessie is a young and innocent boy of seventeen when Grace Dryer, a bounty hunter with a penchant for hunting dark and evil creatures, walks into the saloon where he is working as a clean-up boy. His employer is unpleasant and selfish and so when Jessie makes a decision to help Grace and one of the prostitutes, who turns out to be an evil creature, is killed, he steals a horse and follows her into the wilderness to escape his current life.

Jessie quickly gets introduced to Grace's unusual thoughts on accountability which basically boil down to a belief that creatures that act in a certain way due to instinct are not evil. They are merely behaving as they were effectively programmed to do by their creator. In Grace's initial estimation, it is a choice to kill and act in a malicious and heinous manner that makes a creature or person evil. These initial introductions by the author to her interpretation of good versus evil continue and develop throughout the book as Ms Bakker's leads the reader towards the religious based climax of this book.

The characterisation of Jessie was interesting and the author was clever as she portrayed his loss of innocence and the change in his character as previously unexperienced emotions such as jealously crept into his mind and heart. Some of Jessie's decisions and actions were initially unexpected but it all comes together nicely by the end of the book.

Grace is a conflicted character and the reader vacillates between seeing her goodness and some of her poorer decisions and darker actions. The unfolding of her backstory in this book is well done and shed's light on some of her characteristics and behaviours. Grace develops trust in Jessie which was rather an interesting plot twist.

On the whole, this is a well written and clever story and I cannot fault the editing in any way. People who enjoy weird creatures and horror will love this story but it is not for the squeamish as there are some scenes that are detailed and harsh on a reader's stomach.
Read more
Helpful
Comment Report abuse

Mae Clair
5.0 out of 5 stars Outstanding Western Horror
Reviewed in the United States on July 12, 2020
Verified Purchase
For a debut novel, this author knocked it out of the ballpark. I'm not much for kick-ass heroines, mainly because they come across as, well...contrived, but Grace Dyer is in a league of her own. Not only is she is a strong protagonist, but she's backed by a number of equally strong, unique, and highly memorable characters.

Jessie is a clean-up boy in a saloon, minding his own business, when Grace strides in off the dirty trail and turns his world upside down. From that first explosive confrontation, the reader is sucked into the story, caught up in one astounding encounter after another. Soon, Jessie is hunting nightmarish creatures at Grace's side as she searches for the conniving and sadistic "darksome gunman." Joined by a wolf companion (who is far more than he seems) and a handful of others they encounter on their way, Grace and Jessie's path leads them through towns where innocents are not always innocent an evil-doers, not always evil.

There are plenty of grays in this grim world which entwines the grit of the Old West with Biblical prophecy, Native American folklore, beastly creatures, poker hands, and battle lines drawn between good and evil. It's a melting pot that grabs you right from the start and never lets go until the mind-blowing, staggering conclusion.

Of special note is the author's grasp of period dialect, so perfect you can almost feel the spit and vinegar of trail dust falling off every word. Jessie's character undergoes an amazing story arc, but each of the unique characters has their own moments to shine. As much as I loved Grace and Jessie, Kaga was the standout for me. To discover what made him--and the others--so special, you need to read this wildly colorful and entertaining story. One of my best reads of 2020!
Read more
Helpful
Comment Report abuse

Priscilla Bettis
4.0 out of 5 stars If Louis L'Amour Wrote a Horror Novel
Reviewed in the United States on July 6, 2020
Verified Purchase
This is a Western horror novel featuring a tough-as-nails gunslinger named Grace and her young sidekick (the narrator) named Jessie. They ride horseback across the Old West in search of the Darksome Gunman.

PROS:
Since Guns of Perdition takes place during a journey, Jessie and Grace meet many different people (and creatures!) in many different settings. It could have been confusing, but the story is nestled in a narrative structure that’s easy to follow. And Bakkers orients the reader with each new scene. I never had to pause to figure out which characters are in the scene, where they are, or how much time has passed.

I love the dialect used throughout the book. I know that’s not everybody’s cup of tea, but I enjoy having to slow down and “listen” to words come out of a character’s mouth instead of speed reading over familiar text. I picked up a few Western lingo phrases.:-) Admittedly, the dialect is heavy-handed at times, but it didn’t affect my enjoyment of the story at all, so no stars off.

It’s not obvious at first, but Jessie and Grace’s story ties into the Biblical apocalypse. Bakkers uses Biblical references throughout, and those allusions make the book a richer reading experience.

Jessie’s character arc is so skillfully done! He grows, he becomes wiser, he transforms. I became emotionally attached to Jessie, and his role in the ending scenes gripped my heart.

CONS:
Bakkers’ prose is easy to follow and creates vivid images, but the writing isn’t perfect. Jessie retched too often, for example, and characters frowned hundreds of times. Occasionally it’s not clear (at first) who’s talking in dialogue passages. I took off half a star, but only half a star because the imperfections are few and far between.