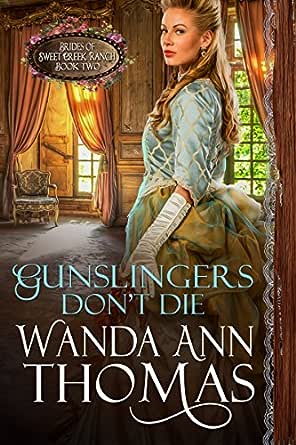 You've subscribed to Brides of Sweet Creek Ranch! We will preorder your items within 24 hours of when they become available. When new books are released, we'll charge your default payment method for the lowest price available during the pre-order period.
Update your device or payment method, cancel individual pre-orders or your subscription at
Your Memberships & Subscriptions
There was an error. We were unable to process your subscription due to an error. Please refresh and try again. 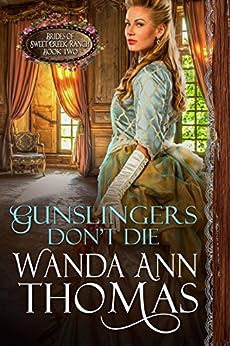 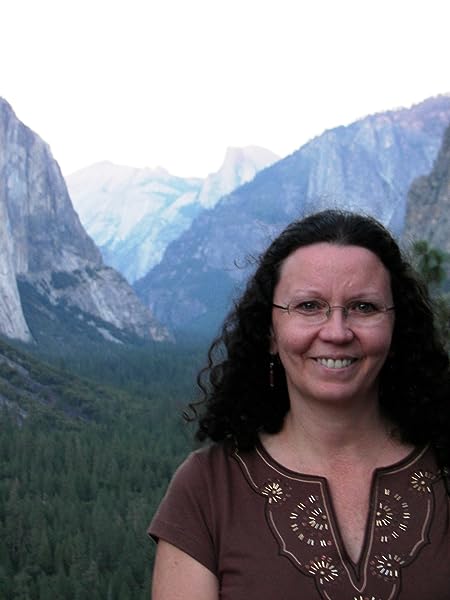 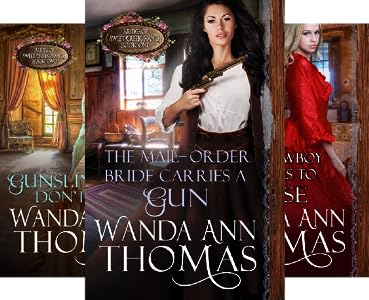 4.7 out of 5 stars
4.7 out of 5
146 customer ratings
How does Amazon calculate star ratings?
Amazon calculates a product’s star ratings based on a machine learned model instead of a raw data average. The model takes into account factors including the age of a rating, whether the ratings are from verified purchasers, and factors that establish reviewer trustworthiness.
Top reviews

Cindy Customer
5.0 out of 5 stars Bounty hunter gets her bounty, loses her man, then finds him again.
Reviewed in the United States on September 23, 2017
Verified Purchase
This was an exciting and agonizing book. So many events both happy and anxious feeling. Boone Haven is a "rescue kid" now over 30 years old and a faamous (or infamous) gunslinger. He has a big heart, and goes around the West righting wrongs, killing those who need to be killed, and rescuing kids who are abused by parents and others. Margaret, former bounty hunter, turned kindergarten teacher, had answered the ad for a bride that Boone's brother, Wyatt, put in the Marriage Gazette paper to reach her own goal of bounty hunting for the $1,000 reward on Boone's head. After being told he was killed, she took his dying dog Jack back to St. Louis with her thinking she was a widow. She took more than the dog with her, as she discovers her 3 day and night "honeymoon" after the wedding brought her a baby. Naming her son Colt Boone Haven after his father and his father's famous guns (she also kept Boones Colt Peacemakers for her son). Seeing a newspaper clipping showing Boone Haven is alive, Maggie takes her son, his nanny Brigetta, the dog Jack, and the Peacemakers West to Aurora, Wyoming, to confront Boone and give his belongings back to him. What happens next is the stuff good novels are made of. Romance, passion, excitement, anxiety, outlaws, bully cattle barons, and loving family members. I highly recommend this series, Brides of Sweet Creek Ranch by Wanda Ann Thomas.
Read more
3 people found this helpful
Helpful
Comment Report abuse

WindRider
4.0 out of 5 stars A good solid story
Reviewed in the United States on April 22, 2020
Verified Purchase
This was a good story with great main characters and that includes Colt who is Boone and Maggie's son. Maggie was unusual in her own right and tougher than she gives herself credit for. She is also loving and has raised her son well with her only real help being
Brigetta. Her life has had several life-changing things happen in it that caused her to change her life's path more than once.
There is also some good supporting people in the story. I really liked the second chance boys, who were rescued and are a part of the Sweet Creek Ranch. Those boys" who ranged in ages added so much to the story.
Emotions, adventure, hot attraction between the M.C.'s and danger play a big part in the story. As does loyalty and a desire to protect. Boone was big on not staying around at the ranch for long because of his desire to protect those he cares about. Many at the ranch don't understand that at first and just think he's someone who runs away, without getting close to many of them.
One of my favorite people was Colt's nanny, Swedish immigrant, Brigetta Lyndtz. She was fierce, loving with the heart of a fierce warrior. She also adds some humor with some of her sayings. I'm happy to see that she gets her own story in the next book.
The story has a H.E.A. ending for now. Because things do get settled between Boone, Maggie and Colt. But there still is a danger out there for the people of this town that hasn't been fully overturned yet.
Read more
Helpful
Comment Report abuse

PamP.
5.0 out of 5 stars A dangerous man
Reviewed in the United States on May 10, 2017
Verified Purchase
I think of the 3 books, so far, in this series, this is my favorite. Sometimes the choices we make when we are young affect us well into adult hood. They even have an effect on the people we love. Boone never thought he'd fall in love. He thought he was destined to spend the rest of his life alone. He didn't want anyone else hurt because of his lifestyle. Maggie just wanted enough money so she could go to school to learn to be a teacher. Can they reconcile their misunderstandings and give into the passion and love they have for each other? Can they make a home for their son? Or will their pass forever tear them apart? Boone is strong and dangerous. Maggie is strong and everything Boone wants. Can they make it work?
Read more
One person found this helpful
Helpful
Comment Report abuse

kate
5.0 out of 5 stars Loved the book
Reviewed in the United States on October 3, 2019
Verified Purchase
I was looking through the free books on my Kindle, and found this one. I had never read anything by Wanda Anne Thomas, but since I enjoy books set in the old west I decided to give it a try, and I am sure glad I did. The story line kept me interested, and I ended up staying up way past my bedtime so I could finish the book. I think my husband got upset with me because the next night l was reading the next book in the series, and staying up late. If you like old west books you will love this one!!
Read more
Helpful
Comment Report abuse

Kindle Customer
5.0 out of 5 stars Boone and maggiev
Reviewed in the United States on June 6, 2020
Verified Purchase
Wonderful story and well written characters were exceptional Maggie becoming unsure with the past watching her mom marry so many different men and the men leaving and Boone always wanting a home wife and children with the background he came from an abusive father and yet always rescuing young boys for the second chance ranch known as silver creek ranch but in the end Maggie Boone and little colt their son had their HEA would highly recommend
Read more
Helpful
Comment Report abuse

Ann M. Caldwell
5.0 out of 5 stars Another great book by Wanda Ann Thomas
Reviewed in the United States on March 6, 2017
Verified Purchase
Another great book by Wanda Ann Thomas. I just loved this book as well as the first book in the Brides of Sweet Creek. Can't wait until the next book comes out. This book is a clean historical book that anyone would love. Great author!
Read more
6 people found this helpful
Helpful
Comment Report abuse

Yvonne Butler
5.0 out of 5 stars Colt
Reviewed in the United States on August 12, 2019
Verified Purchase
Maggie and her small son Colt and his nannie, Brigetta came West to find Colt's father and ask him for a divorce. Maggie had just deceived her degree to teach and had been hired to teach kindergarten next school term. She had found Boone and told him about his son. There are many surprises along the way. I loved this story about the settling in the West
Read more
Helpful
Comment Report abuse

Cmorris
5.0 out of 5 stars Gunslinger don't die
Reviewed in the United States on August 3, 2019
Verified Purchase
I liked this story. I like how she went back to introduce him to his son when she found out he was alive. I love that she was a strong heroine. I liked how he worked to protect his family, fearing that as a gunslinger he put his family at risk so he stayed away. I like that they had to work through their fears and come together as a couple.
Read more
Helpful
Comment Report abuse
See all reviews from the United States

Rosemarie Haley
5.0 out of 5 stars Another good book by Wanda
Reviewed in the United Kingdom on March 1, 2019
Verified Purchase
This is my second book ive read by Wanda and i must say that like the first one i didn't want to put it down.I will be getting more of her book's.
Read more
Helpful
Sending feedback...
Thank you for your feedback.
Sorry, we failed to record your vote. Please try again
Report abuse

Kindle Customer
5.0 out of 5 stars Good but the Alps are not in Sweden
Reviewed in the United Kingdom on March 7, 2019
Verified Purchase
Had to read this to find out what happened with Maggie and Boone, love the way Colt is written. May even read the whole series
Read more
Helpful
Sending feedback...
Thank you for your feedback.
Sorry, we failed to record your vote. Please try again
Report abuse

Amazon Customer
4.0 out of 5 stars Sweet creek
Reviewed in Canada on February 24, 2019
Verified Purchase
After getting the first book free, I had to buy the next one just to see what would happen next. I look forward to finding out how the next brother gets caught. And how they finally defeat Blackwell
Read more
Helpful
Sending feedback...
Thank you for your feedback.
Sorry, we failed to record your vote. Please try again
Report abuse