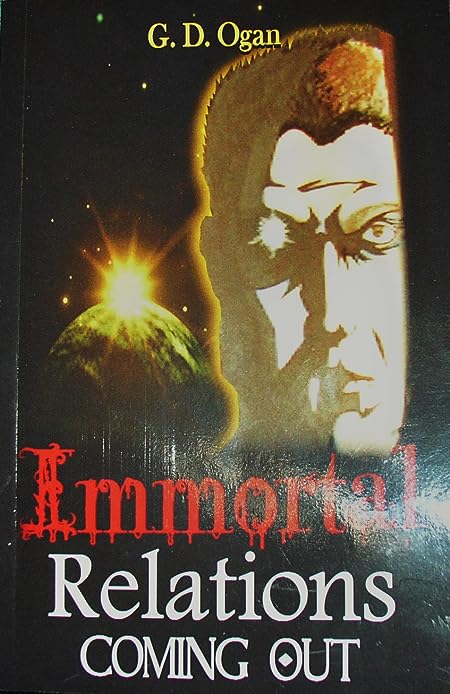 Born in Washington D.C., early in WW-II, I spent my early years in Texas with my mother and her parents while my father was overseas. His overseas expoits had my mother say something which became part of the foundation for my series "Immortal Relations." I graduated from TCU (B.S.), Ball State University (M.A.) and Hardin-Simmons University (M.Ed) and am a Retired Major, USAF & retired Psychologist and Program Adminstrator with the Texas Dept. of Criminal Justice. My first Adult Paranormal-Romance Novel is titled, Immortal "Relations." As an advisory, it has "explicit togetherness" in it (sounds so much nicer than just saying "sex"). The first book starts when "my character" finds a picture that proved "his" late father had a tryst while assigned overseas at the end of WW-II and goes there in hopes of finding out more. There he meets a stunning younger lady who knows far more about his father than she should. My second in the series "Immortal Relations, Love and War" has far less explicit material but with the essentials of the first book so new readers won't be lost (although it is a stand alone story). The third in the series, "Immortal Relations Coming Out"* discusses allowing the human world to know the truth about all the efforts to save mankind conducted by our guardian vampires (they don't attack the living but protect humans and animals). How do they get what little blood they need you ask? I'm told I am the first author to have my vampires owning funeral homes where blood of the deceased must be replaced with a preservative. This is done following funerary laws (no "fangs" involved). If you like stories with LOTS OF ACTION AND POSITIVE MESSAGES OF LOVE AND REDEMPTION THIS SERIES IS FOR YOU! My wife and I live in West Texas with our pomeranians. I believe "Dogs are God's gift to mankind to teach us Love & Loyalty!" My books are available on AMAZON & KINDLE and can be ordered through Barns and Nobles. *Cover photo of third book is shown. 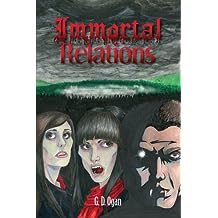 Immortal Relations Jan 17, 2012
by G. D. Ogan
( 11 )
$0.99
When Gary Logan discovers an old black-and-white photograph of his father in Prague with a woman's hadwriting on the back, he flies there to investigate where his father worked while in Europe, only to meet and fall in love with a beautiful lady who he believes to be a vampire. In love with her, Gary is initiated into her coven of guardian vampires, beginning a journey of epic proportions.

Exciting, erotic, and full of heart-stopping action, Ogan's debut novel turns human vampire lore on its head, with a symbiotic relationship between the species that deepens emotional connections to astonishing effect. But a coven of evil vampires bent on destroying the guardian vampires and feeding on the humans at will have other plans. Gary's full vampire son helps humans to almost wipe out the evil coven, beginning the ever-increasing relationship between vampires and humans. Adam then saves Great Britain from nuclear theft and attack; when their nemeses make one last-ditch effort in Russia to bring all of the peaceful societies down, Gary, Adam, and the military join forces to save the human species before their enemy's plans can come to fruition.

Probing the gray areas of sexuality, family, and legend, Ogan weaves an amazing tale, examining the very nature of existence. An unrelenting thrill-ride of passion and action, Immortal Relations will leave you breathlessly awainting the series' second installment.
Read more
Other Formats: Paperback 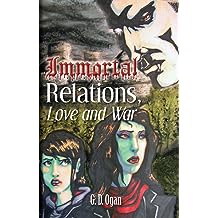 Immortal Relations: Love and War Nov 8, 2012
by G. Ogan
( 3 )
$0.99
While Maggie and Evy hope things have settled down, events have a way of foiling the best of intentions. Death stalks a close friend, but our vampires can help him cheat death if he will accept the offer. His expertise is vital as international events are about to happen that only this old friend can solve! Greed is at the bottom of so many of histories problems, and this book shows just how greedy some governments, rogue OPEC Ministers and terrorists can be and the troubles they can cause. Who is available to thwart their greed and what about the ecological disasters of the impending failure of Chernobyl's containment cap and possible reactor collapse at Fukushima, Japan. When the reactor building at Fukushima falls, a possible "Extenction Level Event" has been predicted! Our heroes will help, if their help will be accepted!
Read more
Other Formats: Paperback