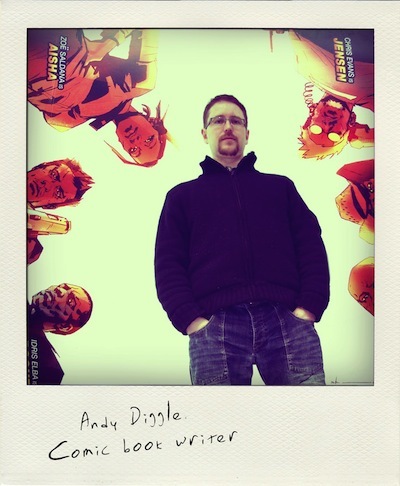 Choose a new release
Explore popular titles in every genre and find something you love. Try it free with trial
click to open popover

Royland Odell Owens
5.0 out of 5 stars It Kept My Interest
Reviewed in the United States on October 27, 2012
Verified Purchase
Being a fan of both Guy Ritchie's movies and Andy Diggle's comics, this book had my interest from the offset being for me a match made in Heaven.

It had Andy Diggle's trademark black op action as well as Guy Ritchie's new age very talkative people that don't fit the image of gangsters. The overall story is good and Mukesh Singh's art is great (I love the flashback scenes).

So if you like Guy Ritchie, Andy Diggle or great Black Op action, you have got to get this book.
Read more
Helpful
Report abuse

Nathan
3.0 out of 5 stars Glorified storyboards?
Reviewed in the United States on February 3, 2008
This is the first book I've read from the new Virgin Comics line. This line seems to have two major ideas: one, to bring Indian concepts and stories to western comic book audiences, has resulted in titles like Snake Woman, Devi and Ramayan; the other, to bring comics talent together with movie names. In that line we've got Garth Ennis writing John Woo's Seven Brothers, Mike Carey writing Nic Cage's Voodoo Child, and, in this instance, Andy Diggle writing Guy Ritchie's Gamekeeper. I'm not certain in any given case how much interaction there is between the movie name and the scriptwriter; whether Woo, Cage and Ritchie contributed much to the story besides a concept, or whether they're actively working on the script with the comics scribe. . .

In any event, this is a pretty decent trade, collecting the five-issue series written by Andy Diggle, whose best work to date is the Vertigo series The Losers, with art by Mukesh Singh, who also provides the art for Devi. It's a very straightforward little tale of one man, think a Chechen Jason Statham with a bit of Wolverine's animal appeal for good measure, killing a whole lot of people in a lot of different ways. The art's very pretty and clean and easy to follow, but as I was reading, I kept thinking of something I read in a recent interview with comics writer Brian K. Vaughan. While discussing potential films of his comics, he said that he likes to think his comics are more than just glorified storyboards. And glorified storyboards is exactly what Gamekeeper looks like. The whole book is just widescreen panels, one above the next, with extremely little variation of any kind. No interesting compositions. Even the "transitions" to the flashback sequences are extremely filmic. Despite that this is an action packed tale, fairly well written and pretty, I got bored with the uniformity of the layout page after page, and couldn't help but wonder why, if they were going to bother turning this movie concept into a comic, it couldn't be a proper comic instead of just glorified storyboards.

If you like pretty pictures or are an Andy Diggle completist, you'll probably enjoy this; otherwise there's little compelling reason to add this mediocre comic to your library.
Read more
Helpful
Report abuse

Malcolm Broderick
4.0 out of 5 stars Like a Virgin Comic, Touched for the Very First Time
Reviewed in the United States on February 11, 2008
I'm not sure how much Madonna's hubby, Guy Richie, ( Lock, Stock & Two Smoking Barrels ) brings to Gamekeeper in the Director's Cut line from Virgin Comics besides his name, but in whatever capacity, it seems to work. This collaboration with Andy Diggle (writing) and Mukesh Singh (art) introduces us to Brock, a Chechen who works as a gamekeeper and master hunter for wheelchair confined Jonah Morgan on an expansive Scottish estate. Shadows of Brock's hidden past are revealed through a series of flashback scenes artistically set apart from the rest of the comic in black & white.

Brock's boss takes in homeless kids from time to time and gives them work and a second chance at life. However, a young boy that Brock discovers in the woods foreshadows a conflict with outside forces bent on destroying Morgan. Equal and opposite to Brock's respect for nature is his contempt for human cruelty personified in his memories of the Russians who invaded his homeland. Hopefully, that hate will sufficiently fuel the fires needed to destroy this new threat.

The script and artwork is top notch. Intended or not, the frequent use of widescreen shots lends a certain movie director feel to the first installment of this graphic novel.
Read more
One person found this helpful
Helpful
Report abuse
See all reviews
Back to top
Get to Know Us
Make Money with Us
Amazon Payment Products
Let Us Help You
EnglishChoose a language for shopping. United StatesChoose a country/region for shopping.
© 1996-2021, Amazon.com, Inc. or its affiliates