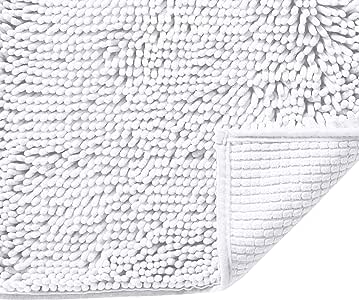 The H.Versailtex's extra thick and luxurious microfiber chenille shaggy rug set is a popular and economical choice when you are seeking something water absorption and comfort for the bathroom

4.4 out of 5 stars
4.4 out of 5
5,679 global ratings
How are ratings calculated?
To calculate the overall star rating and percentage breakdown by star, we don’t use a simple average. Instead, our system considers things like how recent a review is and if the reviewer bought the item on Amazon. It also analyzes reviews to verify trustworthiness.

Swan
5.0 out of 5 stars Awesome!
Reviewed in the United States on February 21, 2019
Size: 17" x 24"Color: Pure WhiteVerified Purchase
Super soft. It is a non slip grip on the bottom, which is perfect for my restroom. The color is really bright and the length is perfect for my small restroom. I am very pleased! It also arrived super fast. Thank you!
Read more

Atags
5.0 out of 5 stars You will be pleased
Reviewed in the United States on February 7, 2018
Size: 17" x 24"Color: NavyVerified Purchase
Great quality, heavy enough without being bulky. The navy is the color I ordered and it is a nice, deep, and rich navy. The rug does move around quite a bit, but I also have three dogs that push it around. It would probably be fine if it were not for the dumb dogs! :) I am very happy with my purchase. Thank you!
Read more
33 people found this helpful
Helpful
Comment Report abuse

MJF
5.0 out of 5 stars Very Soft and Absorbant - Marriage Saver!
Reviewed in the United States on June 20, 2020
Size: 17" x 24"Color: BeigeVerified Purchase
I put this down as a mat for catching water when stepping out of the shower. My wife is one to not towel off well until she steps out of the shower so the floor was always wet. Now I can step on the mat right after she gets out and I don't feel a bit of moisture on my feet or through my socks. Problem solved and another marriage saved by Amazon. Too bad Bezos didn't discover these, it might of saved him a couple of billion $ in alimony.
Read more
20 people found this helpful
Helpful
Comment Report abuse

BD.
4.0 out of 5 stars Surprisingly soft!
Reviewed in the United States on October 24, 2020
Size: 20" x 32"Color: Pure WhiteVerified Purchase
Wanted new bathroom rugs to finally change up the bathroom look. I've had the same shower curtain and matching rugs for at least 8 years, and although I still absolutely love the design, I just wanted a different look.

I didn't necessarily want a solid colored rug... But I just could not find a patterned rug that would make me go, "Dang it, I really want this one NOW!" so it was time to look at solid colored rugs. I also didn't necessarily want a white rug, but I actually have all white towels (and like them) and I like the fact that you can just use regular bleach on the white rug if needed.

Frankly, I was not expecting a whole lot... But I was very nicely surprised. The rug feels very plush and soft under my bare feet, and my rug is not threadbare and/or super thin like some other reviews mentioned.

As far as the slippage factor, I am probably at an advantage because the rug is on the linoleum floor in the bathroom (the apartment I live in hasn't had a bathroom update since being built) and I don't have big animals that could move the rug around (although my 14-pound cat could definitely move my old beloved rug on the bathroom floor, but it was because the old rug actually had zero backing from the beginning). With that said, I tested this rug on the vinyl plank flooring in the living room and the rug would not move when I tried to move it with my feet while standing on it - it bunched just a tiniest bit. HOWEVER - after ONE wash, the non-slip properties are mostly gone, so if the non-slip properties matter to you, this rug is not the item to purchase. As I said, there are not a lot of things happening that would move the rug significantly in my bathroom, but for other people, this may matter a lot. With that said, the rug washed up beautifully and was as fluffy as on the day it came out of the package.

Can't say anything about the absorbency as I really don't spill water on the floor while in the bathroom, but I am sure that the rug will absorb an occasional droplet of water just fine.

The only thing that would make me happier is if I could buy this rug in a bright blue (not green tinted!) crisp turquoise color. Come on guys, you can do it. 😁 Thank you!

DBH
5.0 out of 5 stars Beautiful color, perfect for decor
Reviewed in the United States on August 28, 2020
Verified Purchase
Just got these yesterday for one of my small guest bathrooms and they are beautiful! I searched Amazon for mats in olive to bring out the greenish color of the shower curtain (which I also love but is no longer available on Amazon). This color is perfect and exactly what I wanted. They are very soft and are the perfect sizes for this basic little restroom. The color in the first picture depicts the actual color very well - not a true olive but not hunter or sage either. I haven’t washed them yet but I imagine a gentle wash cycle will treat them well. Recommend!
Read more

Sydster
5.0 out of 5 stars I didn't use it as a bath mat...
Reviewed in the United States on February 22, 2020
Verified Purchase
Hello! I'm a dog trainer on a budget. I used this as a snuffle mat. If you search in the bar above, you'll find "snuffle mats" ranging in price from $15-$50 and up! Yikes! And those aren't always the right size for bigger dogs. I needed something I knew would be big enough and would work, while staying within my budget. This has done just that. And, it's super soft! While I don't know if it's absorbent, it definitely does it's job I have creatively given it.
Read more
18 people found this helpful
Helpful
Comment Report abuse

Debra H.
5.0 out of 5 stars LOVE THIS RUG...GET IT NOW
Reviewed in the United States on November 5, 2018
Size: 20" x 32"Color: NavyVerified Purchase
LOVE LOVE LOVE this rug. Perfect size for in front of my shower. Deep Navy blue goes great with my decor. It feels awesome under my toes due to the thick pile. A bonus is that I can just throw it into the washer to clean and it comes out nice and fluffy. I'm going to buy two more for the vanity area. Plan on getting more for our second bathroom in a different color.
Read more
18 people found this helpful
Helpful
Comment Report abuse

Ann's profile
5.0 out of 5 stars Beautiful color, lush, nice backing, cat approved.
Reviewed in the United States on September 2, 2020
Size: 17" x 24"Color: NavyVerified Purchase
Love this rug, my cat absolutely approved of this purchase. I carefully measured size of rug to fit my small sized bathroom sink, tub area. I love the backing, well made, durable product. Think my cat loves as much or more than me. Thinking of buying more of these, possibly the long runner next. Update: Second photo, my cat has claimed this rug, moved to the hallway. I'll need to buy another one for the bathtub now. Update: I love this rug! Moved to bathroom for me, cat now sleeps on the rug in the bathroom. My cat loves this rug.
Read more

Page 1 of 1 Start overPage 1 of 1
This shopping feature will continue to load items when the Enter key is pressed. In order to navigate out of this carousel please use your heading shortcut key to navigate to the next or previous heading.
Back
Next
Pages with related products. See and discover other items: small foot rugs, contemporary kitchen products, bath rugs and towels, Explore terry bath mats for bathrooms