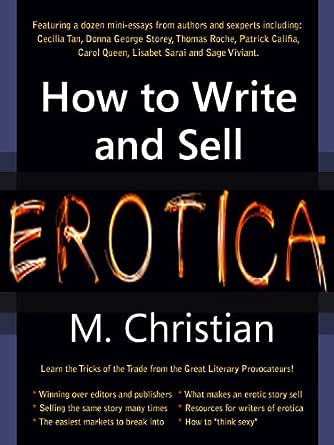 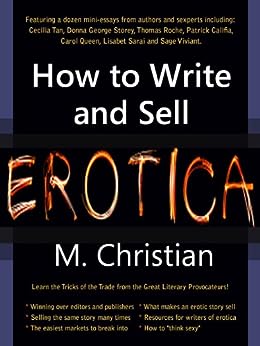 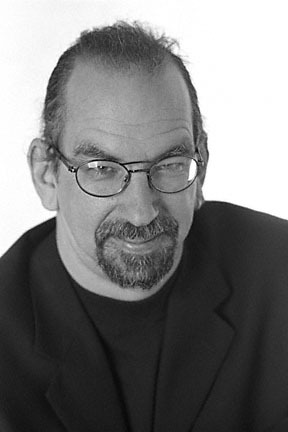 HOW TO WRITE AND SELL EROTICA: Tricks of the Trade from the Field's Most Successful Author Kindle Edition

3.0 out of 5 stars
3 out of 5
10 global ratings
How are ratings calculated?
To calculate the overall star rating and percentage breakdown by star, we don’t use a simple average. Instead, our system considers things like how recent a review is and if the reviewer bought the item on Amazon. It also analyzes reviews to verify trustworthiness.
Top reviews

Terrance Aldon Shaw
4.0 out of 5 stars Insights that "do not blink"
Reviewed in the United States on August 28, 2013
Verified Purchase
M. Christian's "How to Write and Sell Erotica" is a collection of short essays drawn from his regular blog postings on the Erotica Readers and Writers Association (ERWA) website. As one might expect from their origins in the blogosphere, the style of these pieces is personal, pithily opinionated and, at times charmingly irreverent; informal but always informative. Topics are wide ranging, touching on numerous issues of concern to established and aspiring writers of genre (i.e. non-literary) erotica. I especially like Christian's definition of erotica as works that "do not blink" when it comes time to describe sexual activity--a healthy counterweight to the sort of prissy detachment found in books like Elizabeth Benedict's "The Joy of Writing Sex" (1996), which perpetuates the stifling literary practices of twee metaphor and turgid simile in bedroom scenes. Christian's repeated observation that, in our society, if you cut off somebody's head "you get an R rating; if you show someone giving h***, you get an NC-17" is right on the money in addition to being funny as hell because it's so maddeningly true. I find moving, his suggestion that, perhaps, someday society will achieve such a level of enlightenment, frankness and maturity that erotica will disappear as a separate genre--would that it could be so in our lifetime. Like Susie Bright in her classic "How to Write a Dirty Story", Christian does his share of cheerleading, offering encouragement and inspiration, though usually with a healthy dose of realism and a plea to maintain a set of realistic expectations. There are so many marvelous quotable passages in these essays I find it hard to choose only one;

"One more thing you could do [by writing erotica] is help people. We don't like sex in this country. Sure, we sell beer and cars with it, but we don't like it. We're scared of it. Living in this world with anything that's not beer and car commercial sexuality can be a very frightening and lonely experience. Too many people feel that they are alone, or that what they like to do sexually is wrong, sinful or sick. Now, I'm not talking about violent or abusive sexual feelings, but rather am interest in something that harms no one and that other people have discovered to be harmless or even beneficial. If you treat what you're writing about with respect, care and understanding, you could reach out to someone somewhere and help them understand and maybe even get through their bad feelings about their sexuality--bad feelings, by the way, that maybe have been dished out by the lazy and ignorant for way too long."

As with any book of this type, readers will not always agree with the author on every point--and that's as it should be. For instance, I don't agree with Christian--or Stephen King for that matter--who argue that a writer should never resort to a thesaurus. (Hey! Sometimes you need a little help!) Nor does Christian like the idea of constantly "changing up" descriptive words in a text, especially where bodily parts are concerned. Others may be horrified, recalling nightmare critique sessions in creative writing class where they were admonished to avoid repetition and parallelism like the plague. Christian could have a point, although his tone may be a tad too ex-cathedra not to wrinkle a few noses, I remain skeptically neutral on this particular issue, while Christian is happy to inform his readers that he never got much out of those creative writing courses. He also doesn't particularly like being reviewed--"shut up!" I think were his exact words. All I can say is; tough luck, fella; this book is recommended!
Read more
4 people found this helpful
Helpful
Comment Report abuse

Gazelle
3.0 out of 5 stars Not for Indie Erotica Authors
Reviewed in the United States on October 2, 2012
Verified Purchase
M Christian is an excellent writer, no doubt about it. This collection of some of his columns on writing erotica are beautifully written and very informative. Unfortunately, almost all of them are also fairly dated. They primarily focus on how to submit to publishers, writing for publishers, what publishers want and don't want, etc. This is not for those who want to sell erotica on their own, but rather how to sell it to publishers, of which there are too few these days. I can't say that I regret buying this book, but had I known that most of the content was geared toward traditional publishing, I would not have bought it. I can say that I feel like I overpaid for the the amount of information that I personally found to be useful. I did make quite a few notes on my Kindle, so there is some good stuff in here, but IMO too much emphasis on publishers and far too little on the nuts (!) and bolts of how to write erotica that sells.

If this review gave you information that was helpful, please feel free to click the YES button below!
Read more
21 people found this helpful
Helpful
Comment Report abuse

Lynn Swayze
5.0 out of 5 stars Worth Every Penny
Reviewed in the United States on May 7, 2012
Verified Purchase
Don't let the odd cover fool you - this book is a class act above the rest. I can hands-down say that it is by far one of the best-written ebooks on writing and publishing erotica that I've ever read...and I've read quite a few! M. Christian's writing style is clear and easy-to-read, and the author's splashes of humor makes the book more personable. I can tell by the writing of the ebook that M. Christian is an amazing author (or at least, an amazing wordsmith!), and I will likely purchase fiction from him in the future. He covers everything from start to finish and all the goodies in between, and if this book isn't on your shelf, it should be. Much of what he writes holds true for the writing life in general, and he generously shares his long experience in the field with the reader. I do not regret purchasing this ebook, even at the high price.
Read more
5 people found this helpful
Helpful
Comment Report abuse

PJ
1.0 out of 5 stars Dated & Needs Editing
Reviewed in the United States on September 25, 2013
Verified Purchase
As a romance/erotica editor, I'm always on the lookout for books and articles to help authors write better erotic scenes and be more comfortable writing them. According to this book, "Editors are only good for signing checks. Never trust them. Paste a big smile on your face and fight them every inch." A less than professional stance to take against people who exist to help authors deliver clear, professional, polished works to their readers. Bitter, jaded, and harmful advice to give a hopeful author beginning their career. Guaranteed to make their publishing journey a nightmare.

I made it to the 55% mark before I gave up. Between the typos, bad or outdated advice, and the overall this-is-so-hard-and-the-pay-sucks messages it feels more like an effort to discourage skilled competition than to encourage writers, help them be successful, and promote a flourishing industry.

Better advice can be found in this price range and under. I wasted my hard-earned dollars on this title.
Read more
11 people found this helpful
Helpful
Comment Report abuse

doris rye
5.0 out of 5 stars i luv what i know now!
Reviewed in the United States on January 8, 2017
Verified Purchase
love it good to know....
Read more
Helpful
Comment Report abuse
See all reviews

Simone Leigh
5.0 out of 5 stars Great Book
Reviewed in the United Kingdom on August 19, 2016
Verified Purchase
Thoroughly good read. I bought it for the advice but kept reading for the writing style. Will be reading more from the writer.
Read more
Report abuse

1.0 out of 5 stars Disappointing
Reviewed in Canada on August 15, 2012
Verified Purchase
I purchased this book because I was interested in what it took to write Erotica. The book wasn't expensive, so I thought, even if I never used any of the tips, it would be an interesting read.

Unfortunately, I couldn't get through the book. As I began reading, I noticed grammar mistakes, spelling errors, and entire sentences that didn't make sense. I felt as though someone was journaling their thoughts, then the entire project missed the editing stage.

After encountering 3-4 spelling/grammar mistakes per page, I had to put the book down. The mistakes broke up the flow of the text and it became apparent this book was someone's personal joke, and not a well written novel. Disappointing!
Read more
One person found this helpful
Report abuse

J. Smith
1.0 out of 5 stars A waste of money
Reviewed in Canada on May 4, 2013
Verified Purchase
Has nothing to do with the title.
I thought that I'd learn something, but it does not even keep up with the new IT age.
Only seems to glorify the author.
Do not waste your money.
Read more
Report abuse
See all reviews