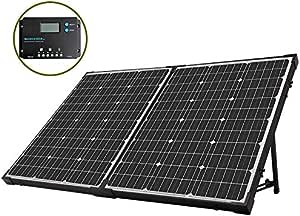 Weighing in at about 27.05 lbs, this lightweight suitcase includes two 50 Watt Monocrystalline Solar Panels, one Renogy 10 Amp Wanderer Charge Controller with an LCD Screen for power regulation, one tray cable with alligator clips for easy connection to the battery, and protective casing for safe portability. The HQST 100 Watt Solar Suitcase will make charging on the go as easy as 1-2-3!

4.2 out of 5 stars
4.2 out of 5
131 customer ratings
How does Amazon calculate star ratings?
Amazon calculates a product’s star ratings based on a machine learned model instead of a raw data average. The model takes into account factors including the age of a rating, whether the ratings are from verified purchasers, and factors that establish reviewer trustworthiness.

Franklin
1.0 out of 5 stars Dead on Arrival, and [Update] shady company
Reviewed in the United States on August 3, 2018
Size: 100W w/ Renogy 10A controllerVerified Purchase
Really wanted to like it. Unlike what some posters said it felt well constructed. The wiring inside is sketchy though and it never worked, no power going to the regulator. Had to check all the wires and wasted tons of time to make it work. Probably faulty regulator. Also, extremely heavy, keep that in mind (I’ve since gotten a mesh panel one and so glad I did).

UPDATE: Returning this item was a nightmare, so factor this in unless you're dead-set on getting this panel for some reason and want to risk getting one of the many that deliver DOA. It's huge and heavy, and they won't pay for any postage back even though it's a DEAD UNIT that arrives. You have to go buy a box to pack it and go drop it off at FedEx and pay $70 for the privilege. Got zero emails from them inquiring about the return. Very shady company, you have been warned.

Mary Ann
VINE VOICE
4.0 out of 5 stars Works great. Shoddy construction.
Reviewed in the United States on July 19, 2017
Size: 100W w/ Renogy 10A controllerVerified Purchase
We camp and this charger recharges our camper battery, so we can run a fan all night. Works perfectly. That being said the construction is shoddy. Came with a broken bracket, and the relay came unglued from the back. No help on finding parts, only suggestion was to return the whole system and get another one. But the panel still charges.
Read more
32 people found this helpful
Helpful
Comment Report abuse

Allthatisman
3.0 out of 5 stars There are two issues, but both can be fixed.
Reviewed in the United States on September 26, 2018
Size: 100W w/ Renogy 10A controllerVerified Purchase
Pros: It works great and it’s easy to use.
Cons: The legs are super weak and broke the first time we used it and the cable is too short. Both are easy fixes though. Extend the cable so it’s not in the shade of you RV and put some self tapping screws in the base of each leg and you will be good to go. See the pictures for details. The hinge of the leg is made out of plastic and falls apart in the heat. The self tappers will fix it. Hopefully they redesign those two issues.

Matt Sturtz
5.0 out of 5 stars so I'd expect it to do better when the sun is more overhead
Reviewed in the United States on June 16, 2018
Size: 100W w/ Renogy 10A controllerVerified Purchase
Initial impression (haven't had it out of the driveway yet!), seems to be built well, I've tested it briefly in the afternoon, and the controller says its putting out about 2.5 amps. This is late in the day, so I'd expect it to do better when the sun is more overhead. In the past I've been able to boondock in our popup for about 2 nights without worrying about our power usage at all (lights, electric pump, furnace blower, powered vent a few hours a day, thermostat-controlled fan behind the fridge, keeping phone/tablet charged (honestly that's probably most of it)), the third night we woke up cold as the furnace wouldn't run. If this panel will produce half of the rated output for four hours a day (100 watts / 12 volts should be 8.3 amps but nameplate says 5.68, half of that ~2.84 amps), I will have 11 amp hours or more, per day, that should keep me going a few extra days. If that really is closer to 22 amp hours, even better, and in the summer it should be able to go longer than 4 hours.

Out of the box, the charge controller was loose between the folded up panels -- I found where there's sticky velcro and re-stuck it. So far it hasn't come off, but if it becomes a problem I'll replace with outdoor mounting tape. Given alternative products are up to 2x the price, I'm OK with this shortcoming. The controller itself has a single button, but it doesn't do anything in this application, the controller is designed to manage a small load as well (think a small solar-powered light fixture), the button will turn that on or off. It has a display which will give you some stats, and there is a manual for the controller included.

The cabling comes with alegator clips you'd clip directly to the battery, and I do think it's a little light for this much current. Since my camper battery is in a plastic marine box that isn't exactly convenient to open, I have a SAE type connector that hangs out to connect a float-charger, this is the same as I've seen on some newer campers for a "solar" connection. I snipped off the clips and soldered a matching SAE connector on instead. I also built myself a SAE to SAE "extension cord" with 10 guage wire, in case the panel needs to be a little further away. Again, givin the price I'm good with this.

Overall I'm happy so far, I'll update my post if that changes. We have a trip planned with a 6-night stay in one place with no hookups, so I'll be putting it through the paces.

PSB
5.0 out of 5 stars Absolutely love it. We were able to move it to ...
Reviewed in the United States on July 23, 2017
Size: 100W w/ Renogy 10A controllerVerified Purchase
Used it for the first time recently when we camped in our travel trailer.. Absolutely love it. We were able to move it to catch the most sun. Kept battery charged 24/7 which is great since I used my C-Pap machine every night (with a 12V connector that I ordered from a C-Pap supplier). In the morning the travel trailer battery was still fully charged. Also, loved the portability and suitcase design. Very sturdy and easy to use. Just connect it to travel trailer battery with attached alligator clips and it's ready to go! My husband did add 12 feet extra wire which he covered with flexible wiremold so we could have more flexibility to catch sun when we were camped in partially shaded spots but the extra wiring isn't a necessity. Just make sure you use proper gauge wiring to avoid over heating if you do chose to add more.
Read more
31 people found this helpful
Helpful
Comment Report abuse
See all reviews from the United States

M. J. Ferguson
5.0 out of 5 stars Five Stars
Reviewed in the United Kingdom on May 14, 2018
Size: 100W w/ Renogy 10A controllerVerified Purchase
works extremely well on my caravan
Read more
One person found this helpful
Helpful
Sending feedback...
Thank you for your feedback.
Sorry, we failed to record your vote. Please try again
Report abuse

Liam
5.0 out of 5 stars Pleasantly surprised
Reviewed in the United Kingdom on July 6, 2018
Size: 100W w/ Renogy 10A controllerVerified Purchase
I was surprised at how well this panel worked. Charged our dead battery on our caravan almost immediately I was in shock . I cannot fault it excellent product
Read more
Helpful
Sending feedback...
Thank you for your feedback.
Sorry, we failed to record your vote. Please try again
Report abuse

Page 1 of 1 Start overPage 1 of 1
This shopping feature will continue to load items when the Enter key is pressed. In order to navigate out of this carousel please use your heading shortcut key to navigate to the next or previous heading.
Back
Next
Pages with related products. See and discover other items: Solar Panels, Best Rated in Solar Panels, max fuse, solar panel, off grid charge controller, Explore quick charge solar panels for generators