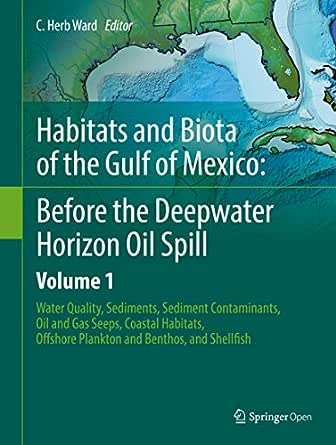 Flip to back Flip to front
Audible Sample Playing... Paused   You are listening to a sample of the Audible narration for this Kindle book.
Learn more
ISBN-13: 978-1493934454
ISBN-10: 1493934457
Why is ISBN important?
ISBN
This bar-code number lets you verify that you're getting exactly the right version or edition of a book. The 13-digit and 10-digit formats both work.

This book is open access under a CC BY-NC 2.5 license.

The Gulf of Mexico is an open and dynamic marine ecosystem rich in natural resources but heavily impacted by human activities, including agricultural, industrial, commercial and coastal development. Nutrients and pollutants from coastal communities and dozens of rivers flow into the Gulf, including material from the Mississippi River watershed, which drains over one third of continental United States. The Gulf of Mexico has been continuously exposed to petroleum hydrocarbons for millions of years from natural oil and gas seeps on the sea floor, and more recently from oil drilling and production activities located in the water near and far from shore. Major accidental oil spills in the Gulf are infrequent; two of the most significant include the Ixtoc I blowout in the Bay of Campeche in 1979 and the Deepwater Horizon Oil Spill in 2010. Unfortunately, baseline assessments of the status of habitats and biota in the Gulf of Mexico before these spills either were not available, or the data had not been systematically compiled in a way that would help scientists assess the potential short-term and long-term effects of such events.

This 2-volume series compiles and summarizes thousands of data sets showing the status of habitats and biota in the Gulf of Mexico before the Deepwater Horizon Oil Spill that began on April 20, 2010. Volume 1 begins with an overview of the following 13 chapters and focuses on the big picture rather than the details of habitat quality and biota.

• Water and sediment quality and contaminants, to provide perspective on environmental conditions in the Gulf.

• Natural oil and gas seeps in the Gulf of Mexico, to identify natural sources of exposure to petroleum hydrocarbons.

• Coastal habitats, including flora and fauna and coastal geology.

• Offshore benthos and plankton, with an analysis of current knowledge on energy capture and energy flows in the Gulf.

• Shellfish and finfish resources that provide the basis for commercial and recreational fisheries.

• Historical data on commercial and recreational fisheries, with an analysis of marketing trends and drivers.

• Ecology, populations and risks to birds, sea turtles and marine mammals in the Gulf of Mexico.

• A final chapter extensively illustrated with original images on diseases and mortalities of fish and other animals that inhabit the Gulf of Mexico.

Chapters in these volumes have been peer reviewed by scientific experts in the subject areas covered.  Hopefully, the collection and analysis of such data for the Gulf of Mexico will be continued and sponsored by responsible federal and state agencies with the frequency needed to accurately assess potential damage to natural resources from ecologically harmful events that may occur in the future.

USEPA Science Advisory Board and served as Chair of the Scientific Advisory Board of the DoD Strategic Environmental Research and Development Program (SERDP). He is the founding Editor-in-Chief of the scientific journal Environmental Toxicology and Chemistry and led the development of the journal of Industrial Microbiology and Biotechnology. He is a Fellow in the American Academy of Microbiology (AAM), Society of Industrial Microbiology and Biotechnology (SIMB), and the Society of Environmental Toxicology and Chemistry. Dr. Ward received the Pohland Medal for Outstanding Contributions to Bridging Environmental Research, Education, and Practice and the Brown and Caldwell Lifetime Achievement Award for Environmental Remediation in 2006, the Water Environment Federation McKee Medal for Achievement in Groundwater Restoration in 2007, the SIMB Charles Thom Award for bioremediation research in 2011, and was recognized as a Distinguished Alumnus by New Mexico State University in 2013. He was a co-author of the 2011 AAM report, Microbes and Oil Spills.
--This text refers to the paperback edition.