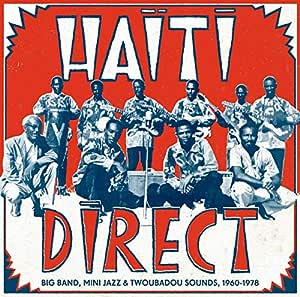 Various Artists Format: Audio CD
4.7 out of 5 stars 18 ratings
See all 5 formats and editions Hide other formats and editions
Includes FREE MP3 version of this album.&nbspProvided by Amazon Digital Services LLC. Terms and Conditions. Does not apply to gift orders.&nbspComplete your purchase to save the MP3 version to your music library.
Available at a lower price from other sellers that may not offer free Prime shipping.

2014 two CD collection, the first in-depth exploration of the vibrant and varied colors of Haiti's music from the early '60s to the late '70s. Haiti Direct celebrates the overlooked musical legacy of Haiti, going beyond Ra-ra and voodoo stereotypes to trace the development of a unique sound that echoed across the Caribbean. Featuring in-depth liner notes and interviews with some of the musicians and producers that shaped the sound, this set is the first widely available compilation to celebrate the unique and innovative sounds of Haiti.

Donald E. GillilandTop Contributor: Rock Music
5.0 out of 5 stars Afro-Cuban Haitian Jazz Rhythm Explosion!
Reviewed in the United States on December 25, 2015
Verified Purchase
After reading a passage in a Wade Davis book that described some Haitian music that he had heard, I was inspired to order this 2-CD set, spanning the years 1960 to 1978. Wow and more wow! This is an extremely interesting and captivating collection of music. At times you'd swear you were listening to some vintage Cuban jazz tunes, and at other times it sounds like something from West Africa. And that, in a nutshell, is the beauty of this collection; so many different musical influences combine for some thrilling songs.

The music of Haiti, especially from this era, was indeed a hybrid of other musical styles. As the liner notes explain, you had meringue, compas direct, cadence rampa, and "mini jazz" forming the template for these sounds. Compas direct, for example, used a "combination of styles reflecting Haiti's African roots and colonial rhythms, incorporating boleros, troubadour vocal styles, ballads, and satire." Cadence rampa is described as having "a beat closer to the mambo" with "the finesse and smoothness of comas direct." What is dubbed "mini jazz" came into being after the bigger bands of the '40s and '50s were downsized in the '60s, resulting in smaller groups that used less instruments. The fact that the "mini skirt" had become a hot fashion item around the same time helped to cement the name for this type of music. You gotta love that!

It truly is impressive that the compilers at Strut were able to uncover so much terrific music for this compilation, especially considering that many of the records were manufactured in small quantities and had little distribution outside of Haiti. But clearly, the musicians on this poor Caribbean island were hip to other sounds from the region and even from Africa, Brazil, and the mainland USA. One track "Jive Turkey" by Djet-Z borrows some riffs from, not the Ohio Players (as you might assume from the song title) but the Eagles' "Hotel California". Weird, but it works!

The CD set comes with a very informative 24-page booklet, giving the reader/listener background information on this era of Haitian music, the various music styles, and details about each track and recording artist. It also tells you which original LP or 45 the song came from, and the recording date and label. For some odd reason, however, they don't list the song times. Other than that slight omission this is a superlative compilation of music from a bunch of musicians that not many westerners have ever heard. More please!

David coppinger
5.0 out of 5 stars a double cd treasure
Reviewed in the United States on April 30, 2014
Verified Purchase
I heard a track on my local community station, by Les Animateurs...thought at first it was West African...but there was something different.I had to have it and bought the cd!. This is such a treasure trove of great music..there is that vibrancy that is common with the african West coast..a love of guitars, backed up with sax, vocals, percussion...and a BIG dose of Caribbean vibe. There is also a distinct streak of a darker side...some vocals that reflect a different energy, not a church choir inspired harmony.
enjoy it!
Read more
5 people found this helpful
Helpful
Comment Report abuse

llarry
5.0 out of 5 stars EXTRA GOOVY
Reviewed in the United States on May 13, 2018
Verified Purchase
IF ALL YOU KNOW ABOUT HAITI IS TABOU COMBO(the best)-YOU WILL DIG THIS GREAT COMPILLATION-FIND IT+BUY IT
Read more
One person found this helpful
Helpful
Comment Report abuse

Thomas B Weden
5.0 out of 5 stars nice introduction to haitian music.
Reviewed in the United States on April 7, 2014
Verified Purchase
this is a fine collection of mainstream haitian music. it features lots of the good orchestras. this style of music has lots of ringing guitars and funky horns set to a gentle dance rhythm. i strongly recommend this. it is nice to see a fine record company like strut branching out.
Read more
4 people found this helpful
Helpful
Comment Report abuse

Camilo
5.0 out of 5 stars Great introduction to Haitian music
Reviewed in the United States on February 7, 2015
Verified Purchase
I hadn't heard much Haitian music before purchasing this album, but I will definitely will be getting more. A lot of African and Latin-American influences, which make for a very happy and high energy album.
Read more
One person found this helpful
Helpful
Comment Report abuse

Stephen Goldstein
5.0 out of 5 stars Wonderful
Reviewed in the United States on March 13, 2014
Verified Purchase
Everything I could have hoped for and more. It has a wonderful flavor. Very nice historic representation of Haitian music. Thanks to NPR for the story that led me to this gem!
Read more
4 people found this helpful
Helpful
Comment Report abuse
See all reviews

hamza sallah
5.0 out of 5 stars Five Stars
Reviewed in the United Kingdom on May 28, 2016
Verified Purchase
I love it
Read more
Report abuse

Mr Graham G Gynn
5.0 out of 5 stars Five Stars
Reviewed in the United Kingdom on April 1, 2015
Verified Purchase
brilliant, fresh and delightful music from such a ravaged part of the world - buy it!
Read more
Report abuse