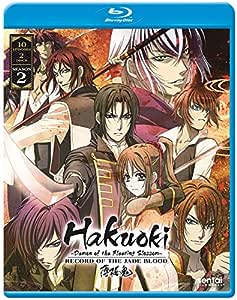 Rated:
Unrated
Format: Blu-ray
4.5 out of 5 stars 37 ratings
Available at a lower price from other sellers that may not offer free Prime shipping.

Hakuoki Season 2-Record of the Jade Blood contains episodes 1-10 of the anime directed by Osamu Yamasaki.Betrayed by the shogun and forced to flee to Edo, the Shinsengumi are fighting a desperate battle; not just for their lives, but for their very souls and the ideals they swore to stand for.Now, as Harada, Shinpachi, and Saito launch a dangerous thrust to fight their way out of Koufu, Chizuru must decide whether to hold true to her own oath to Hijikata. Will she stand guard over the wounded Kondou and Okita, or will she succumb to the hopelessness and disillusionment that has shattered their ranks?As the Fury's advance, Hijikata must face the greatest test of all: can he keep the Shinsengumi together? Can the powers to be gained from the Water of Life ever justify the nightmarish price? As the fires of war threaten to consume Japan, the last hopes of salvation lie in the courage and steel of a chosen few in Hakuoki: Record of the Jade Blood! Special Fe

4.5 out of 5 stars
4.5 out of 5
37 global ratings
How are ratings calculated?
To calculate the overall star rating and percentage breakdown by star, we don’t use a simple average. Instead, our system considers things like how recent a review is and if the reviewer bought the item on Amazon. It also analyzes reviews to verify trustworthiness.

Rebecca
5.0 out of 5 stars I so want more of this story.....
Reviewed in the United States on March 3, 2019
Verified Purchase
Didn't get enough of the Shinsengumi. So miss it that I've been looking for more Anime like it. Would love to see more like this in the world of Anime.
Read more
Helpful
Comment Report abuse

Alisha feen
1.0 out of 5 stars Don't by if your from american
Reviewed in the United States on March 13, 2019
Verified Purchase
If your from american don't get DVD BC I try on mine DVD player and ps3 and it did not work. But it mine fault BC I was excited to get it BC I was watching on YouTube it was really good. But I hope blue ray work BC I going buy it.
Read more

BuckBran
VINE VOICE
5.0 out of 5 stars One of my favorites
Reviewed in the United States on January 26, 2020
I just finished season 2 which is “the end” and I really like this anime. I’m a big fan of the “historical” samurai animes. This one is now one of my favorites. I was kinda surprised cause I knew there was 3 seasons, but season 3 is a prequel so the story ends with season 2 which caught me off guard. Any way the animation is outstanding and my only complaint is the same as I had for season 1 and that’s the fake cheap sound that they used when a sword strikes someone. But the characters are the best cast of characters I’ve ever seen for there being so many main characters. Harada, Saito, Shinpachi, and Souji are incredible. Hijikata is great and Heisuke, Kondou, and Sannan-San are good. It’s got a “Last Samurai” feel to it which makes sense cause they both take place around the same time period. I’m looking forward to watching season 3 just because I really like the Shinsengumi and want to watch more of them. The historical aspect of this fantasy anime is really cool though, and finding out and reading about the characters who were indeed real people was really cool. It has a very realistic feel to it in the way characters interact and relate. The action is good, animation is stellar, characters are top notch making this one of my favorites.
Read more
Helpful
Comment Report abuse

H. W. Stone
4.0 out of 5 stars A strong follow up to season one--
Reviewed in the United States on August 8, 2019
This was not only a strong followup to season one, it actually begins to show itself as more complete and more fluid in storytelling. The really strong aspect is how well all of the segments work together, and the story progresses very well.

A four out of five or eight out of ten, a tiny bit better than the first season.

Hodge
5.0 out of 5 stars Excellent!!
Reviewed in the United Kingdom on July 26, 2014
Verified Purchase
An absolutely must watch anime! It is very sad in places but an absolutely excellent series. You won't be disappointed if you buy this one!!
Read more
One person found this helpful
Report abuse