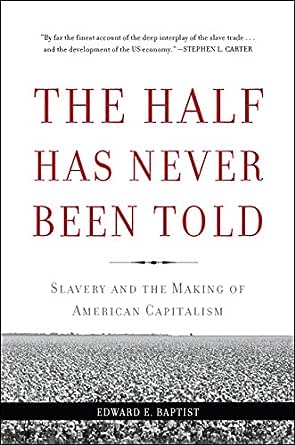 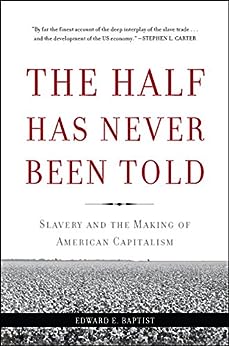 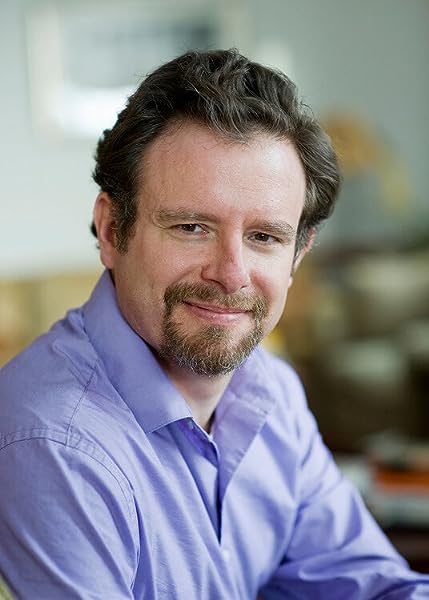 The Half Has Never Been Told: Slavery and the Making of American Capitalism Kindle Edition

Edward E. Baptist is an associate professor of history at Cornell University. Author of the awardwinning Creating an Old South, he lives in Ithaca, New York. --This text refers to the mp3_cd edition.


Peniel Joseph, Director of the Center for the Study of Race and Democracy at Tufts University, and author of Stokely: A Life
"The Half Has Never Been Told is a true marvel. Groundbreaking, thoroughly researched, expansive, and provocative it will force scholars of slavery and its aftermath to reconsider long held assumptions about the 'peculiar institution's' relationship to American capitalism and contemporary issues of race and democracy. Engagingly written and bursting with fresh, powerful, and provocative insights, this book deserves to be widely read, discussed, and debated."

4.7 out of 5 stars
4.7 out of 5
1,003 global ratings
How are ratings calculated?
To calculate the overall star rating and percentage breakdown by star, we don’t use a simple average. Instead, our system considers things like how recent a review is and if the reviewer bought the item on Amazon. It also analyzes reviews to verify trustworthiness.
Top reviews

Noah Webster
1.0 out of 5 stars Evocative, not Economic, History
Reviewed in the United States on November 9, 2019
Verified Purchase
“In the event that you didn’t know that slavery was a brutal and inhuman system, cotton was an important part of the development of American industry or that the South was not going to voluntarily give up slavery in 1860, you will find this book insightful.

Otherwise you you will not find much data in this book that supports Baptists principal conclusion that slavery and torture of slaves was not only part of the development of American industry but was the essential element that allowed the US to transform into a highly productive industrial economy that gave citizens the ability to escape the long standing “Malthusian” trap and see a rapid increase in living standards.

Nor does the book provide much more than a limited amount of data that would support the author’s critical claim that the four fold increase in cotton picking productivity in the South was driven principally by the ability of enslavers to make continuous and effective improvements to a system of torture Baptist refers to as the “Pushing System”.

Counter arguments can be found in articles by Alan L. Olmsted and Paul W. Rhode (Slave Productivity in Cotton Picking, 2018 and the source of Baptist’s data), John J Clegg (Capitalism and Slavery, 2015), and James Oakes (Capitalism and Slavery and the Civil War, 2016). Some of these articles are behind paywalls. Preliminary articles or drafts are often available for free.

Generally, academic arguments get fairly tedious, fairly quickly, unless you really enjoy the topic. I think its worth publicizing the better reasoned and researched academic challenges to Baptist’s ideas given that his more controversial conclusions have made it into popular press and seem to becoming part of the storyline on the development of the American free market. The New York Times 1619 project accepted its conclusions without much in the way of qualifications. It would not be too surprising that others will do the same.

The author refers to his historical method as evocative and he conveys the experiences of American slaves with tremendous compassion and empathy. This is indeed the major appeal of this book. However, if this book had been assigned to me by a college professor without a countervailing argument, I would be concerned that I was being trained by an activist and not an academic.

The parts of the book that are quite valid (e.g. the brutality of slavery, the important role slavery played in the development of American industry, and the fact that the Southern slavery system was not going to collapse economically) are not hidden by historians and have already been told. These views were debated quite actively in the 60’s, 70’s and 80’s and many of these perspectives are quite mainstream now(see work by Eugene D. Genovese, Robert Fogel and Stanley Engerman and Gavin Wright that capture some of the debate). At best, it is possible to say that the more controversial parts of Baptist’s work are theory and yet to be convincingly proven.”

Michael Hughes
5.0 out of 5 stars Should be required reading for graduate school for study in either Economics; American History; MBA; Afr. American History
Reviewed in the United States on November 14, 2016
Verified Purchase
The content of the first 20-30 pages gave the impression that the book had been mistitled. However, by page 120 I had become convinced that the author had provided an vital resources in in understanding how the dots connected between slavery~cotton~manifest destiny~capitalism~the brutal nature of this peculiar institution. I read heavily on the subject of slavery and found this to be the best treatment to date that I have found to address the connection between slavery and America's rise to become a 20th century superpower. This book was so good that I purchased and listened it on CD after having read the print copy. HIGHLY RECOMMENDED.
Read more
166 people found this helpful
Helpful
Comment Report abuse

Anne Mills
5.0 out of 5 stars The "Peculiar Institution" At the Center of Our History
Reviewed in the United States on January 14, 2017
Verified Purchase
This is a "must read" book for anyone who is interested in American history, which means anyone who is seriously interested in American politics. Baptist argues that slavery was at the center of the early expansion of the American economy, using both careful research and moving narratives of individual slaves.

Most writing about American history tends to focus on slavery, the "Peculiar Institution" of the ante-bellum South, as a regional issue whose political effects became critical, but whose national economic effects were limited. Baptist turns that view on its head, arguing that the economic effects of slavery dominated the national economy in the fifty years before the civil war. He documents this view with rigorous research, focussing on the fact that the amount of cotton produced by each slave rose sharply over the period, reaching levels that free labor could not match. Cotton became America's most important export, and, indirectly, the basis of much of the rest of the economy -- the South was a major market for the North, increasingly so as the South grew richer and richer. This led to the development of a financial system emerged that depended on the continued geographic expansion of slavery, which spilled over into the political sphere and came to dominate Southern priorities.

Baptist's book is carefully researched, solid economic history. But it is also a searing examination of how slavery worked in the cotton fields of the deep South. The rising productivity of slave labor was no accident; it was the result of torture, and the fear of more torture. It is painful to read much of what he writes about how slaves were treated -- punished, humiliated, separated from family -- and he doesn't mince words. For example, he refers to "slave labor camps" instead of "plantations", part of a shift in view that makes what happened stark and real.
Read more
101 people found this helpful
Helpful
Comment Report abuse
See all reviews

apf102
5.0 out of 5 stars A powerful and important retelling of the story of slavery
Reviewed in the United Kingdom on March 1, 2015
Verified Purchase
In many ways this book does for the story of slavery what Dee Brown's "Bury my heart at Wounded Knee" attempted to do for Indians in 1970 - it recasts the whole of the story of slavery to see it through the experiences of those it affected. But where Brown's speculative approach was criticised, Baptist is forensic in his evidence. He draws the tales of ordinary men women and children from the pages of the scant records and produces a narrative of living, breathing human beings.

Baptist fundamentally challenges the bastions of long held slavery orthodoxies and demonstrates how the issues which led slavery to such success not only built modern America but also drove the development of capitalism. Further he cautions, that such practices might still be seen in the world today.

A powerful book and required reading for anyone interested in this topic.
Read more
11 people found this helpful
Report abuse

Kindle Customer
5.0 out of 5 stars Arresting and powerful
Reviewed in the United Kingdom on October 26, 2018
Verified Purchase
This is a forensic debunking of previous attempts to limit the impact of slavery on the development of the American republic in the nineteenth century. The author comprehensively demonstrates that slavery was central not just to the development of Southern agrarian capitalism but also to Northern finance capitalism.
Read more
Report abuse

BELA MOLNAR
5.0 out of 5 stars like myself. Extremely detailed story
Reviewed in Canada on October 18, 2015
Verified Purchase
Everybody supposed to read this book, specially the Europeans, like myself. Extremely detailed story, heavy reading, from an era of shameful time. And we still celebrating Columbus...? Pathetic.
Read more
3 people found this helpful
Report abuse

Christian Nugue
4.0 out of 5 stars Blood diamonds
Reviewed in France on April 27, 2015
Verified Purchase
Far from being a sideshow, a marginal phenomenon, slavery epitomizes American XIXth century capitalism. Enormous fortunes were built litterally on the back of black people transported against their will to the "Southwest" and made to toil eleven hours a day in the cotton fields. "Added value" was extracted with the whip. The "half" which is told here is in fact a main component of American history.
Edward Baptist is a professional historian who builds his case on thousands of charts and original documents that make his main thesis absolutely convincing and a valuable contribution to the ongoing revival of studies devoted to slavery.
A minor spoiler now: I wish the author had focussed on his point and refrained from telling individual stories, or more precisely, to woe the reader with the premices of individual stories that never fully materialize, probably for lack of documents.
Read more
Report abuse
See all reviews