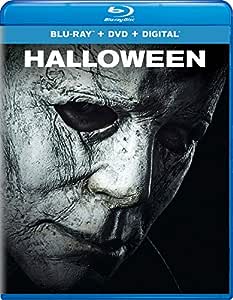 Jamie Lee Curtis returns to her iconic role as Laurie Strode, who comes to her final confrontation with Michael Myers, the masked figure who has haunted her since she narrowly escaped his killing spree on Halloween night four decades ago. Master of horror John Carpenter joins forces with director David Gordon Green and producer Jason Blum (Get Out, Split) for this follow-up to Carpenter's 1978 classic.

Your Digital Copy redemption code is printed on an insert inside your Blu-ray/DVD package.

A Digital Copy is a digital version of the full-length movie that you get when you own specially-marked Blu-ray/DVD discs bearing the “Digital” logo. Owning the digital version of the movie extends your enjoyment because it enables you to download or stream your movie to a computer, mobile device, internet-connected TV, Blu-ray player, or set-top box.

4.6 out of 5 stars
4.6 out of 5
1,881 customer ratings
How does Amazon calculate star ratings?
Amazon calculates a product’s star ratings based on a machine learned model instead of a raw data average. The model takes into account factors including the age of a rating, whether the ratings are from verified purchasers, and factors that establish reviewer trustworthiness.

Ashton Murong
5.0 out of 5 stars A slash far above the rest
Reviewed in the United States on October 31, 2018
Halloween is directed by David Gordon Green and co-written by Danny McBride. It is the 11th movie of the significant horror franchise, which is by far my favorite of all the horror franchises. The first Halloween and each subsequent follow ups all hold a place, some more special than others, in my heart, yes, even Season of the Witch and the Rob Zombie movies. But this entry is something else entirely. Not only to me is it the best Halloween sequel, I also believe it is the best Halloween movie, the best slasher movie and one of the best horror movies of all time. Period.
The movie takes place 40 years after the original movie, ignoring all sequels in between. While this is not the first time they have done that, in fact this is the fourth alternate timeline in the series, this time however I believe they got it right. In a storyline reminiscent to Halloween H20, the main difference being instead of having Laurie Strode running away from her past, this time she is prepared for it, as the 40 years past has her spent honing her battle skills to ready herself for Michael’s impending return.
Jamie Lee Curtis as Laurie Strode here gives a terrific performance that is rare among horror movies; more akin to a serious drama. Curtis is believable and nuanced, allowing the film to ground itself into a level of realism, divorcing itself from the goof and lunacy from earlier entries like The Curse of Michael Myers and Resurrection. Curtis is the backbone of the film and without her giving it 110 percent, the movie could have faltered and not worked at all.
Thanks to the grounded performances and direction, Michael Myers this time around feels much more menacing. Since the victims he kills feel way less like cannon fodders like in typical slasher movies, the overall tone of the character is darker and more mean-spirited. While still having some slasher tropes, the characters in the film feel more real than ever, so when scary moments hit, I genuinely wanted them to survive, but only for my heart to sink, when they bite the dust in the bloodiest, most disgusting, brutal way.
Michael Myers is a horror icon, but he has not been frightening since the original. As the series went on, he became a generic masked killer at best and laughable at worst. The reason for that is because the sequels simply do not know how to frame him. Ask yourself what makes someone scary? Absolutely not when you explain away his curse with Thorn and turn him into a hitman for a cult, or recount his white trash family backstory. None of that. Here he is just a highly resilient, deranged man, who lacks morals and empathy, and preys on one of mans’ primal fears - at any moment someone can break into your house and murder you for no reason and with no remorse.
The best scene of the movie is a tracking shot where we follow Michael through the neighborhood, breaking into people’s houses and murdering them in the grisliest way. The camera, the tension, the lighting, the kills all make it one of the best horror scenes of recent memory. And the final showdown between Laurie and Michael was cathartic and satisfying, having been built up throughout the entire film.
As for negatives, I kind of wished they show more of the holiday of Halloween. Yes, we get a Halloween dance and background scenes of children trick or treating, but something the past movies did absolutely right was capturing the spirit of the holiday that I felt this movie kind of just skimmed through. I wanted more walks through the autumn foliage and perhaps even a scene at a costume shop would have been appreciated.
With Laurie and Michael both working as characters for their different respective reasons, the rest of the technical aspect of the film is equally brilliant. The writing, directing and music (of which John Carpenter returned for) are all top-notch. Halloween 2018 is the best movie of the series for me, topping even the original because of the much more menacing nature of Michael Myers. The movie is a slash far above the rest of horror movies of the same vein. Halloween will satisfy those who are looking for a fun, jump scare-filled movie, as well as those who are looking for intense, arthouse horror.

That guy
2.0 out of 5 stars Heartbreaking disappointment..Zombie's remake had more love for the original.
Reviewed in the United States on October 29, 2018
I consider John Carpenters Halloween to be the greatest movie ever made. Not only is the film amazing but it also captures a moment in time (the late 70's) better than any film from my childhood..I don't have time to write a thesis on the power of the original Halloween or the time to explain why Zombie's remake was the perfect alternate view of the story to someone that grew up with Halloween in their dna.

I really believed that this take on Halloween was supposed to return to the atmosphere and attitude of John Carpenters masterpiece and I looked forward to it more that any movie in years..I thought Michael Myers would once again become "the shape" lurking in the shadows causing fear, dread, and gut wrenching suspense with the help of a evil sounding minimalist score (even John Carpenter disappointed me here). And why not pay homage to Dean Cundey's fantastic cinematography? This looked like some made for Netflix poorly lit fake film..I'm glad they dropped the Laurie is Michael's sister thing that started in Halloween 2 (A far superior film) but that is about all that I liked...If this is supposed to be a direct sequel to the original why make Laurie a psycho vigilante hell bent on revenge?..I have no problem with the Laurie character making a appearance in the film, but to have some ridiculous final show down with a plot to cage "The Shape" is about as far away from the mindset of groundbreaking 70's independent film making as you can get...And don't get me started on the sitcom style humor.

I swear I almost started to tear up in the theater due to my disappointment. This is no better than Halloween 4,5,6, H20, but anything is better than Resurrection...Halloween, Halloween 2, Halloween 3: The Season of The Witch, Rob Zombies Halloween, and yes even Rob Zombies Halloween 2 are all that exist to me. But those films are still not worthy of being mentioned in the same breath as the original Halloween. I have not been this wrecked with disappointment since "The Phantom Menace"
Read more
88 people found this helpful
Helpful
Comment Report abuse

VictoriaSelene Skye~Deme
2.0 out of 5 stars Fail
Reviewed in the United States on January 5, 2019
Verified Purchase
Well whoever edited this ruined the already non viable script and cheesy acting. Too much gore and little content. Even Jamie Lee Curtis went the B queen route of acting in this, and I doubt intenionally. Really goofy. Like I know the gore was supposed to be so abysmally graphic it was supposed to come across as farcical. Fail. It just came across as gross. The script is painful to be subjected to. I watched it in increments it was so bad. The only reason it gets 2 stars instead of one is for the actor who played the little kid who bas being baby sat by Barbie waiting for Dave. "You gonna die , Dave." ok, I laughed. That little kid had that small role down to such perfection it was flawless. His performance was the only one worth watching in this 2018 version, otherwise, nope. Fail.
Read more
31 people found this helpful
Helpful
Comment Report abuse

StrandedPirate
2.0 out of 5 stars Lame
Reviewed in the United States on January 19, 2019
Verified Purchase
Before watching I was led to believe Curtis's character had trained herself into a bad a$$, but nope, more like a crazy rambling idiot barely capable of wielding a fire arm. The high level players; writers, producers and director should be ashamed of the final result. So much energy wasted on scenes that add nothing to the plot, the doctor turned psycho and saying crap in a deep voice, the grand daughter running through the woods screaming at mannequins, youths saying stupid rude crap to each other at parties, journalists visiting people and being jerks. All of it a waste of time when they should have been focusing on Curtis's character, Micheal and a real story.

Clearly heavily edited which accounts for a lot of scenes that seem "off".
Read more
28 people found this helpful
Helpful
Comment Report abuse
See all reviews from the United States

sudipta g.
5.0 out of 5 stars Great deal
Reviewed in India on October 9, 2019
Verified Purchase
Got it in an excellent condotion. Great video quality.
Read more
Helpful
Sending feedback...
Thank you for your feedback.
Sorry, we failed to record your vote. Please try again
Report abuse

HSN
4.0 out of 5 stars Best horror movie for 2018
Reviewed in Australia on January 24, 2019
Verified Purchase
Got it for a best mate. He’s a die hard fan of the movie. He loves the covering and the DVd
Read more
Helpful
Sending feedback...
Thank you for your feedback.
Sorry, we failed to record your vote. Please try again
Report abuse