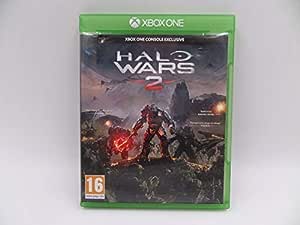 Brand: Microsoft
Platform : Xbox One |
Rated: Teen
4.6 out of 5 stars 331 ratings
Amazon's Choice recommends highly rated and well-priced products.
Amazon's Choice for "halo 2 xbox one"
Available at a lower price from other sellers that may not offer free Prime shipping.
In Stock.
FREE delivery: Saturday, Oct 31 on your first order.
Fastest delivery: Wednesday, Oct 28 Details
Sold by GameSource and Fulfilled by Amazon.
New & Used (8) from $13.06 + $3.99 Shipping

Halo Wars 2 delivers real-time strategy at the speed of Halo combat. Get ready to lead Spartans, Warthogs and other classic Halo fighting forces in a brutal war against a terrifying new enemy on the biggest Halo battlefield ever

4.6 out of 5 stars
4.6 out of 5
331 global ratings
How are ratings calculated?
To calculate the overall star rating and percentage breakdown by star, we don’t use a simple average. Instead, our system considers things like how recent a review is and if the reviewer bought the item on Amazon. It also analyzes reviews to verify trustworthiness.
Top reviews

Alexandr Kelly
1.0 out of 5 stars Terrible game, and atrocious business practices
Reviewed in the United States on May 15, 2018
Verified Purchase
Nothing against the seller!

First of all, I started playing the campaign, then got bored of it before anything interesting happened, because it wasn't interesting.

Secondly, I then moved to Skirmish, as I loved this game mode from the original Halo Wars, and I was forced to be either blue or red team. This problem has followed over from Halo Wars and got worse. I want to be able to choose my color, and having an inability to even be green for UNSC or purple just raised my annoyance meter. Then when I looked at the maps that weren't DLC or on the Season Pass; I'll get to this in a second, they were all boring. Most of them were the same generic maps that looked like I was fighting inside a space ship.

Now onto the DLC. There's a season pass, which means half the game was cut out and is hidden behind a pay wall. This really pisses me off, and it seems 343 Industries and other AAA titles are playing this same game. Ok, I understand these games cost alot to make, so I'll move on to the other DLC. More than half of all leaders are DLC, overpriced DLC. Sgt. Forge was free, surprisingly, but everyone else, including the Arbiter cost $10. For a leader with one special unit. Heck, I can't even have leaders join the fight like in Halo Wars. Next, the overpriced maps that looked exactly the same as the maps included in the vanilla game.

Now what broke the camels back for me, was that you have to pay for DLC that isn't, let me say again, IS NOT included in the Season Pass. This DLC includes the flood. That's all. You get a few maps and you can fight the flood. For about $25-$30. Yes, I'm being serious. This game is half assed, and is complete crap. I played this game for about 20 minutes, got bored of it, saw the atrocity that was the Microsoft store for this game, then I decided I'm going to sell it to someone else who might want it for their kid.

In conclusion, DO NOT but this game if you loved Halo Wars and are appalled by the terrible business practices that this game is pulling. Just use your Halo Wars disk and play that on the Xbox One, that's what I'm going to do.

James
3.0 out of 5 stars Average at best console rts
Reviewed in the United States on December 30, 2017
Verified Purchase
Very repetitive gameplay, has a different feel than the 1st one, story is short and sucks, maps are very similar and none is anything to write home about. I wouldn't pay more than 20 to 30 dollars.
Read more
Helpful
Comment Report abuse

spiders-n-vinegaroons
5.0 out of 5 stars Fun for all ages
Reviewed in the United States on November 25, 2019
Verified Purchase
Great fun and easy game to navigate through. The Halo universe never disappoints with characters and storylines. Fun for all ages.
Read more
Helpful
Comment Report abuse

McCall E.
3.0 out of 5 stars Its okay
Reviewed in the United States on January 3, 2020
Verified Purchase
Gameplay is a little difficult, kind of to be expected since its not on the computer.
Read more
Helpful
Comment Report abuse

Joel12
5.0 out of 5 stars Great game and new sealed
Reviewed in the United States on February 1, 2020
Verified Purchase
Big fan of halo wars already. Love the story concept. I also added the additional story for $20 online. That's how much I lole this came.
Read more
Helpful
Comment Report abuse

Sharky
4.0 out of 5 stars Good Fun, Fair Price
Reviewed in the United Kingdom on January 6, 2018
Verified Purchase
I adored the original Halo Wars on the Xbox 360, so I thought it might be fun to play the new game on the Xbox One. I enjoy real-time strategy games and I like the Halo universe, so at just £20 this seemed like a good deal.

If you're new to this game then I recommend playing the three reasonably short tutorials. There are a lot of controls, characters, vehicles and strategies. The tutorials do a great job at explaining everything.

The campaign missions are okay, not great. There's no real diversity and typically you have to defend this or attack that. There's a story arc to the campaign and the player is rewarded to a cut scene animation after each mission.

I'm happy with my purchase. Having played the original I knew what I was getting. I would have been disappointed had I paid more than £20. If you enjoy strategy games and the Halo franchise then you will probably enjoy this.
Read more
4 people found this helpful
Report abuse

J. O'Reilly
3.0 out of 5 stars War what is it good for?...
Reviewed in the United Kingdom on March 13, 2019
Verified Purchase
Massive fan of the original game as the story and cinematic where compelling.

It's a completely different take on HALOs first-person-shooter mechanic and is instead a command and conquer strategy game using infantry, vehicles and air support to take on the enemy.

I've found this edition to be more of a meat-to-the-grinder experience as I'm winning battles just by churning out more and more units to smash the enemy whereas the original felt there was more strategy required to win a round. This is akin to simple button smashing and completing the level, doesn't feel a challenge.

Amazon Customer
4.0 out of 5 stars Great game, if you liked Halo Wars - You'll love this!
Reviewed in the United Kingdom on March 2, 2017
Verified Purchase
Great follow on from the original, similar style of game with a few tweaks to the game play and some new units - which is what you want! They haven't tried to reinvent the wheel with this, they've just expanded on the first game. I'm not a huge fan of the new leader powers system, it was a bit simpler in the original. Initially they seem confusing but I'm sure as time goes on they'll be easier to use in the midst of battle.

The campaign is very good and the cut scenes are what make it, so far it's a great story and I'm enthralled! (half way through)
Read more
6 people found this helpful
Report abuse

brad
4.0 out of 5 stars Not bad, but not great
Reviewed in the United Kingdom on May 24, 2017
Verified Purchase
Not as keen on this one as the previous game, can't seem to get into the new combat style they have adopted, still playable though specially if you're new to the series
Read more
One person found this helpful
Report abuse

Page 1 of 1 Start overPage 1 of 1
Previous page
Next page
Pages with related products. See and discover other items: 2016 xbox one games, xbox one 2016