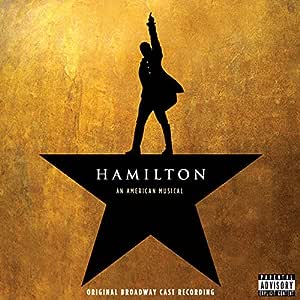 Original Broadway Cast of Hamilton (Artist) Format: Audio CD
4.6 out of 5 stars 9,162 ratings
Amazon's Choice recommends highly rated and well-priced products.
Amazon's Choice for "hamilton soundtrack cd"
See all 10 formats and editions Hide other formats and editions
Includes FREE MP3 version of this album.&nbspProvided by Amazon Digital Services LLC. Terms and Conditions. Does not apply to gift orders.&nbspComplete your purchase to save the MP3 version to your music library.
Available at a lower price from other sellers that may not offer free Prime shipping.

"Hamilton" - which transferred to Broadway following a sold-out run at The Public Theater in NYC - is the acclaimed new musical about the scrappy young immigrant Alexander Hamilton, the $10 Founding Father who forever changed America with his revolutionary ideas and actions. During his life cut too short, he served as George Washington's chief aide, was the first Treasury Secretary of the United States, a loving husband and father, despised by his fellow Founding Fathers, and shot to death by Aaron Burr in a legendary duel.

4.6 out of 5 stars
4.6 out of 5
9,162 global ratings
How are ratings calculated?
To calculate the overall star rating and percentage breakdown by star, we don’t use a simple average. Instead, our system considers things like how recent a review is and if the reviewer bought the item on Amazon. It also analyzes reviews to verify trustworthiness.

Kristl Tyler
5.0 out of 5 stars Crosby, Stills & Nash - Mine can't be the only one
Reviewed in the United States on October 30, 2019
Verified Purchase
My beautifully packaged Hamilton CD set came today but the music burned into the CDs is not Hamilton. I rated it a 5 anyway because I don't want to hurt the product's reputation overall. Someone should probably look into this before another customer ends up with the same set.

UPDATE: I couldn't get in touch with a human so i had to send it back. I noticed also that the booklets are both Act 1. Presumably I should have had one for Act 1 and one for Act 2. ALSO - when they shipped my replacement, they did not ship to the place I had designated for the original to be shipped. They didn't even ship to the same person! They labeled it with my husband's name instead of mine even though, the account is mine and over the life of the account it's been me, me, me. They did not ship to my default address. I thought that was kind of sloppy.

Nicole Hettenhausen
1.0 out of 5 stars Zero stars
Reviewed in the United States on September 29, 2019
Verified Purchase
Let me just start with: I love 'Hamilton'! I ordered this CD expecting it to actually be 'Hamilton'. I was so excited when the package came! I opened it up, and it looked legit: everything was labeled 'Hamilton'. When I put the CD into the player, though, what I heard was not even close to 'Hamilton'; what played was some oldies band. I tried the second CD, and it was the same kind of music. Both CDs said 'Hamilton' on them, and I am so pissed that I didn't get what I ordered.
Read more
110 people found this helpful
Helpful
Comment Report abuse

Hamilton is an absolute masterpiece--educational, singable, rousing, inspiring. I won't go on and on about it because I assume that anyone looking to buy has heard clips of it before, but needless to say--it's absolutely worth it. I was excited to see a "clean" version coming out because my four-year-old loves to sing along with me, and it was becoming a bit of a pain to sing loudly over swear words and the part about having s** with horses.

The soundtrack comes in a double-cd case with one booklet for each cd (act). The case itself is a little flimsy and has already popped apart several times, but does pop back together. The booklets detail the cast and crew, full lyrics for each song, and inspirational elements, which were very interesting. Some were more obvious (Ten Duel Commandments taking inspiration from Ten Crack Commandments), but some were more subtle (Cabinet Battle 1 containing elements of The Message), and it was great to be able to sit down and listen and think about what Lin-Manuel Miranda was thinking when he composed his songs.

I removed a star because the album is not "clean" as advertised. I expect a clean album to contain the original material, but remove, at the least, swear words (the d, s, and f words). At the most, suggestive elements might be removed ("lock up your daughters and horses, of course it's hard to have intercourse over four sets of corsets"). I didn't expect this cd to necessarily go one way or another, but I was irritated to realize that it didn't bleep out a lot of the swearing. I would've expected the D word to be edited out.

I think the easiest way to make your decision is to know exactly what's left in. Now, I don't mind all of these words, I just would've liked avoiding screaming some of them out the car window with my kid--but I've included any word I think anyone MIGHT possibly object to, even if I don't, just so people know whether they need to avoid this or whether it doesn't bother them at all.

Alvin C.
5.0 out of 5 stars Warning: It's Awesome
Reviewed in the United States on September 25, 2015
Warning: Don't want your spouse to smack you? your kids to kick your shins? Then avoid this album at ALL COSTS. You'll ignore them. all. Brushing off this warning may cause severe feel good feely feelings. You may experience a spell of charisma, nostalgia, intrigue, etc. Once you've reached elation, forget calling for help. The addiction has now taken you. Soon your family will start experimenting with this album and know Aaron Burr and Alexander Hamilton are more than just a trivia question from the Got Milk commercial from 1993. Everyone loses.

Truth be told and joking aside, I can't get enough of this album. The source material is certainly not all "feel good", but the retelling of Hamilton's journey was masterful. The musical blend by Miranda was hypnotic and brought up doses of nostalgia. Everything from the instrumental echoes of Grandmaster Flash to the slick rhymes of 80s/90s Hip Hop intertwined and woven with past Broadway styles was truly a fantastic experience for me. As for the story, I won't spoil the content of the album. That would be stealing an opportunity from you. I'll leave it at this:

I enjoyed this album enough to:
-sing along with it
-move along with it
-make plans to fly out to Broadway to watch and support this show
-most importantly: find out more about Alexander Hamilton beyond the 1993 Got Milk commercial

I hope you enjoy this album as much as I have
Read more
1,285 people found this helpful
Helpful
Comment Report abuse

Richard
1.0 out of 5 stars Hamilton vs Graham Nash
Reviewed in the United States on October 12, 2019
Verified Purchase
A friend sent me this CD and the CD although labeled Hamilton was really Crosby Still and Nash 2 set CD. I called Amazon and they sent me a replacement the next day and it too was a Crosby Still and Nash 2 set CD. I did mention when I called the first time that this could be a bad batch and that they should listen before they send another one out and she said that would not happen.....so I will be returning this one as well for a refund and I will but the CD elsewhere. Not the typical experience with Amazon but obviously someone somewhere recorded the wrong music and put a Hamilton label and booklets in with the CD. Oh well!
Read more
50 people found this helpful
Helpful
Comment Report abuse

Kim Hoover
1.0 out of 5 stars ADVERTISED AS CLEAN BUT ITS NOT CLEAN
Reviewed in the United States on January 1, 2018
Verified Purchase
My daughter listens to the “clean” version of Hamilton 24/7 on YouTube so I was glad when I saw I could buy her the “clean” CD version. Well, it’s not the clean version and I’m so disappointed I spent money on a Christmas present that was advertised as clean but is not. Total waste of money.
Read more

Darren
5.0 out of 5 stars This is epic
Reviewed in the United Kingdom on April 20, 2019
Verified Purchase
I have not even seen the show. But this is my go to, all time, motivational soundtrack. Especially the first disc. A tale of overcoming adversity, friendship, and making your way in the world.

I hope the facts are correct as everything I know about the War of Independence, is now based on this.

I wake up in the morning with this soundtrack in my head. In today's society, it can seem like we are all outmanned, outgunned, outplanned etc.... but this will inspire you to stay in the game.

Charlotte-Mary
3.0 out of 5 stars Amazing Soundtrack Poor Quality CD
Reviewed in the United Kingdom on June 26, 2020
Verified Purchase
Love the soundtrack it's incredible HOWEVER I bought two of these one for me and one for my dad. My CD started skipping and I assumed it must be my CD player in the car (even though none of my other CD's have had this issue) and shrugged it off. Then when I was round at my dads he put his CD on in the house and his skips awfully too. I would probably recommend if you want this album to buy it elsewhere or download the tracks.
Read more
4 people found this helpful
Report abuse

havekippawilltravel
5.0 out of 5 stars You get what youre expecting.........a quality recording of an excellent new musical due to open in London next october. Go see
Reviewed in the United Kingdom on October 14, 2016
Verified Purchase
A wonderful new musical.
Quality of sound is good, production a little dodgy as they've obviously had to make cuts in a continuous recording to produce individual tracks, and the two lyric books that come with it are substantial and accurate. I'd recommend this. Don't be misled by claims that it's a 'hip hop' musical.........it's pretty much a standard (if enjoyable) piece of work that conforms to the 'operetta' style of musical with continuous music and no spoken dialogue.
Read more
5 people found this helpful
Report abuse

Sophie Barker
5.0 out of 5 stars AMAZING!
Reviewed in the United Kingdom on August 24, 2017
Verified Purchase
Such as awesome soundtrack with a great story too. Lin Manuel Miranda is a genius and the whole musical is so well written. I could honestly listen to this over and over and can't wait for the west end transfer. If you like musicals then this is definitely one you should listen to!
Read more
6 people found this helpful
Report abuse

Raquel C.
5.0 out of 5 stars A masterpiece of modern times!
Reviewed in the United Kingdom on November 26, 2018
Verified Purchase
I'm a dreamer who still believes that dreams do come true (if you don't give up and keep working on them). I sometimes feel like given up because the World isn't kind on dreamers. This is the soundtrack on which dreams hold on for dear life. A must have for those who believe and for those who want to.
Also, a masterpiece of modern times that prove that Lin Manuel Miranda is a genius! Do yourself a favour and buy it!

as a side note, my boys (8 and 4) are OBSESSED with this! how cool is that?
Read more