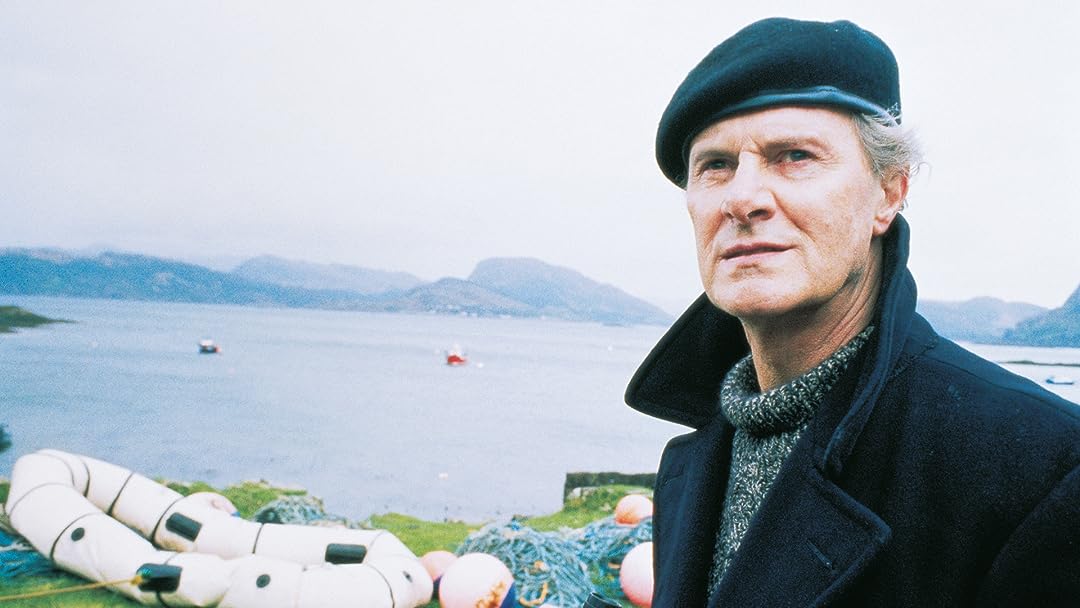 (208)
1995X-Ray16+
Drama series starring Robert Carlyle as the eponymous hero, a police constable who is posted to the small Scottish town of Lochdubh. Along with his canine sidekick Wee Jock he uses his own unique methods to get to the bottom of many an unconventional crime and misdemeanour - but will he be able to solve the ongoing problems in his own love life? Based on the mystery novels of M.C. Beaton.

KatherineReviewed in the United States on August 7, 2005
5.0 out of 5 stars
Five episodes are better than none...
Verified purchase
This little gem of a series is one of the most entertaining tv shows I've ever seen. It's funny, sad, quirky, dramatic and can make you laugh one moment and weep the next. Each of the characters is unique and brings their own brand of nuttiness to the Scottish village of Lochdubh. In the middle of it all is Constable Hamish Macbeth, solving crime while trying to stay low-key enough to not be promoted to a precinct in one of the big cities. The Scottish accents can be a bit overpowering at times but it shouldn't deter. Robert Carlyle stars as Hamish and he's wonderful (as he always is), but there are really two stars of this series that make it memorable: the incomparable scenery of Scotland and a little West Highland White Terrier by the name of Wee Jock. A warning to fans of the MC Beaton, HAMISH MACBETH mysteries...the television series bears no resemblance to the book series. The tv series and the books are entirely separate entities and should be enjoyed as such. Thank you BBC for giving the fans dvd's in the region 1 format. Please give us season 2 and 3 also. ADDED NOTE: I agree that it's a shame "West Coast Story" isn't included in this collection but you'd have to take your gripe to the US movie studio that holds the rights to the movie, "West Side Story". Because the Hamish Macbeth episode uses some of the music from the movie, the producers of the dvd either cannot afford to obtain the rights or the studio has refused to grant them permission to use this episode on the dvd. Nothing can be done and it's really too bad. However, the show is still worth having on DVD, because the five episodes you can see are brilliant.
133 people found this helpful

David W. KinneyReviewed in the United States on October 18, 2021
4.0 out of 5 stars
Scottish brogue
Verified purchase
The series was okay and did follow the books somewhat, but it was a little difficult to understand due to the scottish brogue or accent.

PhyleneReviewed in the United States on October 17, 2006
3.0 out of 5 stars
A good series but lacks authenticity
Verified purchase
I enjoyed this DVD very much. However, as an avid reader of M.C. Beaton's books, I would like to have seen the series follow the books more closely. Although Wee Jock is an adorable dog, I would have preferred M.C. Beaton's "Towser" shown as Hamish's dog, a lovable mutt whom Hamish cooks for and who accompanies Hamish on his investigations. Although the series is interesting, I think it would be far more interesting if M.C. Beaton's actual murder plots were followed. That is really what makes her books difficult to put down. I think this DVD has been done very nicely, Robert Carlyle makes a perfect Hamish and the scenery is spectacular but the series lacks the plot lines to make you want to continue watching it. It is just too laid back to be interesting. M.C. Beaton has also written many books featuring her detective Agatha Raisin. Her character would make a very interesting series. Perhaps the company that produces the Hamish McBeth series should also consider beginning one that features Agatha Rasin. M.C. Beaton has written more Agatha Raisin mysteries than ones featuring Hamish MacBeth. I do not want to be negative about this series but I think that changing M.C. Beaton's plot lines is not the way to produce this series.
12 people found this helpful

C.A. ArthurReviewed in the United States on June 19, 2006
3.0 out of 5 stars
Depends on one's taste
Verified purchase
This is neither a detective series nor a comedy. It's an odd mixture of the two, with a dash of soap opera, featuring a lot of Scottish scenery and a handful of characters who inhabit a single community somewhere north of Inverness. The hero is a policeman who is very human, and even breaks the law to protect his friends and defend his manhood. (An outsider mocks his name, so Hamish--twice--kicks in the headlights of the man's expensive car. Then, at about 125 pounds, he thrashes the larger bad guy.) Other characters in the series are only mildly entertaining when intelligible; some of their dialogue is lost thanks to heavy Scottish accents. The first two episodes are especially weak. The last two are quite good, the best being "Wee Jock's Lament." So, it's a matter of taste. People seeking gentle dialogue and local color will no doubt enjoy this much more than those who prefer A Taste of Frost and Fawlty Towers.
11 people found this helpful

Susan Kay FioritoReviewed in the United States on March 25, 2006
4.0 out of 5 stars
Great fun!
Verified purchase
My two daughters and I have just fallen in love with this series! The country side is gorgeous and the eccentric behavior of the scottish people is especially fun for us americans. Who wouldn't want to live in the little village, Lochdubh? Robert Carlyle does a great job as Hamish, but our favortie charactor is Lackey Jr. played by Stuart Davids. He is just delightful and fun. The BBC version doesn't follow the books too closely by M.C. Beaton, but the scripts are well written and interesting. Wee Jock is of course always darling. Highly recommended. There is a series II out now in England, can't wait for Amazon to make that available, we will buy it for sure.
13 people found this helpful

CunyProf.Reviewed in the United States on November 23, 2010
1.0 out of 5 stars
Where is Beaton's Hamish?
Verified purchase
I bought this video after having read and enjoyed M.C. Beaton's Hamish Macbeth series. Having now viewed the video, I wonder why the producers ever bought the rights to the Beaton books. They seem to have erased all the books' major features. In the book Hamish is very tall and has "fiery red hair", both traits being defining characteristics that elicit frequent comments on the part of the narrator and other characters. He is charming, gentle, and somewhat naive; in appearance lazy and a moocher, but actually very effective at his job and has a genuine interest in the welfare of the villagers and a passion for his part of the Highlands. Priscilla, his ex-fiance and continued love of his life, is a classy and stunningly beautiful woman who according to the narrator, looks like she just walked out of the pages of Vogue magazine. In the video none of these defining characteristics exist. Robert Carlyle, the actor who plays Hamish, is not tall and has no red hair. He seems sulky and standoffish to the villagers, and more than anything acts as if he is "long-suffering" in his job. Priscilla's name has been changed to Alexandra, and though she is obviously the same character, daughter of the Colonel who owns the now-hotel-former-manse, is coarse looking and quite definitely not beautiful--and always disheveled.
These are only a few of the ways the producers have traduced the Beaton series of books. The question always arises in similar cases as to whether it is justified to make the comparison between the book and its filmic version, but this isn't Shakespeare that invites new readings and interpretations. If the producers wished to bring the popular and low-brow Beaton series to the screen why not remain at least somewhat faithful to the original? If you have read the books don't buy the video, you'll be disappointed. If you're coming "new" to the series, then maybe you won't care.
17 people found this helpful

Deborah MacgillivrayReviewed in the United States on October 25, 2005
5.0 out of 5 stars
BOO!! Hiss - episode #4 is missing!!
Verified purchase
While I am thrilled they are FINALLY putting Hamish out on DVD - WHY did they fail to include the FULL YEAR??? first six episodes were

So while the series is wonderful and great to have they are cheating us out of #4 episode. Are they going to drop an episodes from 2 & 3? SO we end up missing 3 full episodes? Or do we pay for the "Lost Hamish Episodes". Just a tiny note that says "We regret Episode 4 "West Coast Story" could not be included in this collection." Och, that is mean!

This series is brilliant. The characters of zany Scots comes through loud and clear. It's one that bears repeat views.

Just don't cheat us!! TV John would not be amused!

G. BetzReviewed in the United States on June 22, 2006
4.0 out of 5 stars
A charming less well known British Detective Show
Verified purchase
I stumbled onto the existance of this show while googling West Highland Terriers, and a certain "Wee Jock" plays a recurring supporting role. Since I do enjoy a good British mystery and did enjoy 'The Full Monty" My curiosity was piqued. The quirky characters reminded me of Northern Exposure in a Scottish Setting

Although the plot lines are more direct and can have a sharp edge to them and so far they are delightfully short of the existential tangents that permeated that show. Having seen the 1st season all the way through my advice is for anyone who even thinks that they would enjoy this be prepared to obtain the 2nd season as quickly as possible.
6 people found this helpful
See all reviews
Back to top
Get to Know Us
Make Money with Us
Amazon Payment Products
Let Us Help You
EnglishChoose a language for shopping. United StatesChoose a country/region for shopping.
© 1996-2022, Amazon.com, Inc. or its affiliates