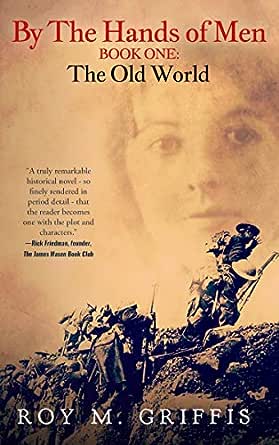 You've subscribed to By the Hands of Men! We will preorder your items within 24 hours of when they become available. When new books are released, we'll charge your default payment method for the lowest price available during the pre-order period.
Update your device or payment method, cancel individual pre-orders or your subscription at
Your Memberships & Subscriptions
There was an error. We were unable to process your subscription due to an error. Please refresh and try again. 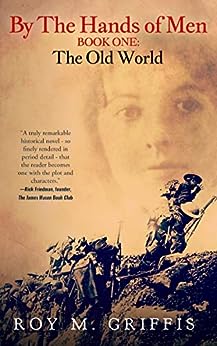 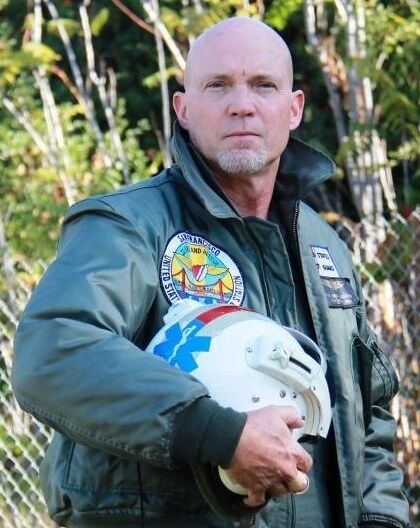 By the Hands of Men, Book One: The Old World Kindle Edition 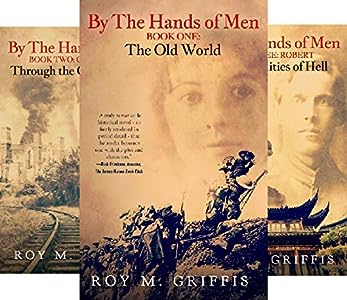 Exceptional
I rarely interrupt my reading by taking the time to post, but this book deserves a favorable acknowledgement. With such a vivid accounting of history and a most memorable portrayal of characters, I am compelled to continue reading. Thank you Mr. Griffis for such an engaging work of art! -- 5 Stars, Amazon Reviewer

Great historical novel
One of the best historical novels I've read in quite a long time! It is totally believable and takes place during and after World War I. The author manages to capture and hold your attention on every page. The characters become very real and the love story was a plus. This was a great read! I have bought book two! -- 5 Stars, Amazon Reviewer

With elements reminiscent of Hemingway's A Farewell to Arms
In the midst of World War I, a relationship develops between an English lieutenant and a young Russian nurse--a surprising tenderness against the backdrop of war...with likable characters, spending more time in the Old World is an appealing prospect. - Kirkus Reviews

The By the Hands of Men series

An English Lieutenant and an immigrant Russian nurse meet scarcely a mile from the bloody trenches of World War One France, where they witness the hell that the hands of men can create.

The memory of their brief weeks together will follow them for years as they cross a world staggered by war, revolution, and duplicity.  Epic historical fiction, the saga sweeps across four continents in a gripping tale of fate, loss, redemption, and love.

Roy M. Griffis has written short stories, plays, poetry, novels, and screenplays. He is a past member of the Writer's Guild and a former US Coast Guard Rescue Swimmer.  He currently lives in a  small town in Texas with his very smart and pretty wife, along with his son, three rescue dogs, and two rescue cats.  He is hard at work on two new novel series.
Read more

4.5 out of 5 stars
4.5 out of 5
177 global ratings
How are ratings calculated?
To calculate the overall star rating and percentage breakdown by star, we don’t use a simple average. Instead, our system considers things like how recent a review is and if the reviewer bought the item on Amazon. It also analyzes reviews to verify trustworthiness.
Top reviews

Desert Sailor
4.0 out of 5 stars Get This Book Now!!
Reviewed in the United States on June 11, 2016
Verified Purchase
I wish I could give this book 8+ stars, but I'm limiting myself to 4. I read lots of reviews and often dismiss the 5 stars because I suspect they are either not honest or else submitted by uncritical fans. So I hope this 4-star review catches some attention. I've given only three reviews of the dozens of books I've read via Kindle; I hope this will give some weight to what I have to say.
It will save you some reading here if you JUST GET THIS BOOK and then the two following (and the fourth still to come). The story Mr. Griffis has fashioned is fascinating, compelling, heart-warming, heart-breaking and masterfully told. My wife and I (I'm 80-years old; she's at the moment 5 or more years younger) both have developed an engrossing interest in Charlotte and Robert as well as the many other characters who populate their world. The experiences that shape them are so well described that you'll feel yourself at their shoulders being affected right along with them.
I refuse to reveal more; you deserve to rejoice in the privilege Mr. Griffis has extended to us to immerse in this engaging book--and its successors.
Read more
39 people found this helpful
Helpful
Comment Report abuse

Adrienne Perry
5.0 out of 5 stars The start of something amazing!
Reviewed in the United States on January 25, 2019
Verified Purchase
Historical fiction is probably my favorite genre, when it’s well researched & well written of course, & I don’t mind at all if the tale is enhanced by a great love story, exactly what the “By the Hands of Men” series by Roy Griffis delivers! Centered around the inferno of WWI & it’s tumultuous aftermath, we’re immersed in the ardent romance between an expatriate Russian nurse serving with the British Army & a wounded British officer who find their lives torn asunder when he falls seriously ill & is shipped back to England with the expectation that he will die. The narrative takes us on a hair-raising journey to Russia during the heart of it’s bloody revolution & reveals the shattering atrocities committed in Belgian Congo during the reign of King Leopold. The series offers a sweeping view of much of the world at that pivotal time as we follow the harrowing tribulations of two intrepid people as they struggle to survive & find one another once more. I find the overriding theme to be that of man’s inhumanity to man, as well as, thankfully, our ability to rise above it.

I’ve enjoyed each of the books in this series & can highly recommend it to all who enjoy history & adventure, & more than a dash of romance!
Read more
12 people found this helpful
Helpful
Comment Report abuse

Megan Welch
5.0 out of 5 stars A beautiful love story amidst the horror of war
Reviewed in the United States on July 22, 2018
Verified Purchase
A beautiful book that depicts war in a way I’ve never seen done before. Not only does Griffis give us the perspective of the human atrocities, but also the horror imposed upon innocent animals. A child appears in the story and the scenes around him and the other characters are so memorable and tender amidst the tragedy of war around them.
I fell in love with the characters. I cared deeply for them.
Never would have thought a book about war would be a page turner for me, but the development of character and crystal clear point by point visual of the setting made it difficult to put down.
A testament to the goodness of the human spirit without being preachy and heavy handed, I have recommended this to many.
Read more
11 people found this helpful
Helpful
Comment Report abuse

James G. McAlister
5.0 out of 5 stars A Beautiful, deeply moving read.
Reviewed in the United States on April 12, 2018
Verified Purchase
I had previously read and thoroughly enjoyed Griffis' first two books of The Big Bang: the Lonesome George Chronicles series (and anxiously await the third). I purchased this first book of the By the Hands of Men series knowing that Griffis is a fine writer and willing to change genres to experience more of his skillful characterization, descriptive "eye", plot construction and pacing. But I approached this read with some skepticism. A blurb about the book had said the writing was reminiscent of Hemingway's. That had to be over-the-top, I thought. Wrong! The reviewer was correct, and then some! Where The Big Bang novels, in keeping with the chaotic nature of their post-apocalyptic scenario, employ a more "raw" style, this novel is sumptuous in the telling. It is a wonderful story of well-kept duty, self-sacrificial service, nobility, humility and good will in the horrific carnage of the Flanders battlefields of World War 1. I was moved to tears on more than one occasion. The depiction of ardent yet chaste love between a wounded officer and a front-line nurse is so refreshing and effective and moving in our crass cultural moment.
Read more
4 people found this helpful
Helpful
Comment Report abuse

dutchgirl47
5.0 out of 5 stars Beautifully Written Saga of WWI
Reviewed in the United States on June 20, 2016
Verified Purchase
I just completed the third volume in this outstanding series and cannot wait for volume four to complete the saga of Charlotte and Robert. Mr. Griffis writes of events at the front lines of WWI that have been brought to life so vividly in this series. It was a brutal, gritty, bloody time in world history and you feel all the pain and suffering along with rare moments of grace along with the characters. There is currently a British series from 2014 running on PBS called 'The Crimson Field' which parallels this time in history and I've found so many similarities that cross-reference the book and make it come to life even more.
Read more
15 people found this helpful
Helpful
Comment Report abuse
See all reviews

Raymond Lully
5.0 out of 5 stars A story of love in dark times
Reviewed in Canada on September 7, 2018
Verified Purchase
The first offering in this series was quite a welcome change from what one usually encounters in best-seller lists or featured in so-called progressive lit blogs. The story captivates you right away and keeps you engaged right through to the last page. Definitely worth checking out!
Read more
Report abuse