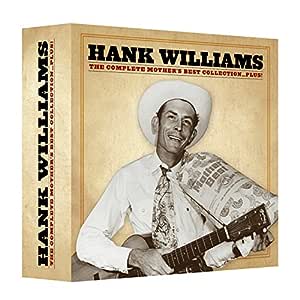 Secure transaction
Your transaction is secure
We work hard to protect your security and privacy. Our payment security system encrypts your information during transmission. We don’t share your credit card details with third-party sellers, and we don’t sell your information to others. Learn more
Details
Ships from
Amazon
Sold by
Hybridseller
Return policy: This item is returnable
In most cases, items shipped from Amazon.com may be returned for a full refund.
Read full return policy
Hank Williams: Mother's B... has been added to your Cart

4.6 out of 5 stars
4.6 out of 5
52 global ratings
How are ratings calculated?
To calculate the overall star rating and percentage breakdown by star, we don’t use a simple average. Instead, our system considers things like how recent a review is and if the reviewer bought the item on Amazon. It also analyzes reviews to verify trustworthiness.

hObO jOe
3.0 out of 5 stars A must-have collection for hardcore Hank fans, despite thin sound
Reviewed in the United States on May 10, 2019
Verified Purchase
For under $20, you get 15 (!) CDs and 1 DVD featuring interviews with Don Helms and Big Bill Lister. This set expands on the previous 3-CD set of Mother’s Best shows, ‘I Saw The Light: The Unreleased Recordings,’ which was another Time-Life set. That’s one hell of a bang for your buck.

Let me state upfront that the only reason I give this incredible set 3 stars is because of the audio quality. It sounds as thin as the ‘Unreleased Recordings’ set. While the transfers from acetate to tape, and ultimately to the digital realm are clean and well done, they sound frustratingly thin, with almost no low end and weak mid range. Comparatively, the Mercury release of the Health and Happiness Shows in the ‘90’s sounds positively robust, if lacking a bit on their high end frequencies. In listening to these 15 Mothers Best discs, you can turn up the bass on your stereo (or whatever your listening medium is) and it will improve the listening experience somewhat, but it’s very disappointing that this wasn’t addressed in the mastering stage of these historical recordings. I suppose I should just be grateful that these were released at all. However I strongly disagree with some of the other reviewers who say that these recordings sound better than Hank’s MGM recordings, even though the Mother's Best are top-shelf recordings for that time.

That aside, this is a virtual treasure trove of Hank, Miss Audrey and the Drifting Cowboys. As a companion piece to Colin Escott’s superb Hank Williams bio, you can really get a good sense of Hank's art of performing and how he was able to relate to, and understand his audience. My favorite story tells you all you need to know about how Hank connected with his audience: that folks in the South would often ask when buying a radio in the ‘40’s “...Will it get Hank Williams?” This set really fills in that picture even more than the Health/Happiness shows did. Heck, I even enjoy listening to Audrey; I find her singing like a car wreck - it’s tough to look away. And it gives more insight to the Hank/Audrey dynamic that Hank, the band and everyone else in their orbit had to put up with. Of course, Hank’s singing here is clear as a bell and he makes it sound effortless. I truly love listening to his voice (and apparently so did he).

If you are a true hardcore Hank Williams fan, you have to have this set. Despite my misgivings about the audio (and yes, that is somewhat subjective), you will spin this nonstop if you’re as much as a Hank admirer as I am.
Read more
3 people found this helpful
Helpful
Report abuse

J. Clayton
5.0 out of 5 stars Timeless Hank Williams
Reviewed in the United States on February 16, 2019
Verified Purchase
If there's any disappointment, it's in myself for not ordering this years earlier. Being able to hear songs that Hank never recorded commercially such as "Pins and Needles in My Heart," "I Dreamed of the Great Judgment Morning," and "Thy Burdens are Greater than Mine," amongst others, has helped foster an even greater appreciation of his talent. The immediacy of the studio dialogue, even the repetitions of the sales pitches for Mother's Best Flour, made for an enjoyable listen; and that went for every single show. As of now, early 2019, the price is incredibly low for so many discs and such a large quantity of first-class music. Do yourself a favor and find yourself some "new" Hank favourites, as I have. You can't say that occurs often for someone who has been gone for more than 65 years.
Read more
3 people found this helpful
Helpful
Report abuse

Joyce L. Buckley
5.0 out of 5 stars I love to hear Ole Hank talk
Reviewed in the United States on December 24, 2016
Verified Purchase
I love to hear Ole Hank talk...even if it's mostly about Mother's Flour. The episodes are a brief 15 minutes. Hank sings, The Cowboys play, they come together for a Hymn then he says his signature farewell. I just love all...well except for four discs where Audrey butts in and sings-shouts over Hank. How he, and everyone involved, must have agonized.
Read more
9 people found this helpful
Helpful
Report abuse

Larry E. Schultz
5.0 out of 5 stars Hank at his best
Reviewed in the United States on November 21, 2018
Verified Purchase
I have been waiting for this set to drop in price from around $200 to present price. Well worth the buy if you’re a Hank fan, in fact it’s a must.
Read more
4 people found this helpful
Helpful
Report abuse

nuzombie4
5.0 out of 5 stars Great music for value ratio.....highly recommend!
Reviewed in the United States on February 26, 2019
Verified Purchase
I was so hoping a reissue of this album would occur as I couldn't afford the original "old radio" package of a few year's ago!this is the same track list wise as that but at a 1/4 the price!great package!!
Read more
2 people found this helpful
Helpful
Report abuse

Ryan Barnes
5.0 out of 5 stars Fantastic!
Reviewed in the United States on November 28, 2018
Verified Purchase
I love listening to Hank Williams & His Drifting Cowboys radio shows early in the morning before the sun comes up. These recordings help me start the day and go to sleep at night. It's like traveling back in time and listening to these recordings on the radio. Highly recommend for any fans of The King of Country Music.
Read more
One person found this helpful
Helpful
Report abuse

Nikki
5.0 out of 5 stars ♥ Perfect gift for the Hank Wiliams fan
Reviewed in the United States on March 5, 2019
Verified Purchase
Purchased these for my father in the UK.
Very happy with his gift.
Read more
Helpful
Report abuse
See all reviews

Thomas Ciaran Patrick Beattie
5.0 out of 5 stars A Whole Lot Of Hank
Reviewed in the United Kingdom on January 23, 2019
Verified Purchase
This boxset really does offer a lot of Hank for not a lot of money. If you're into Hank you won't be disappointed and if you're thinking of checking him out it's a great starting place.Recommended
Read more
One person found this helpful
Report abuse

Montgomery
5.0 out of 5 stars A classic collection
Reviewed in the United Kingdom on April 27, 2017
Verified Purchase
A tad expensive for casual fans but a fascinating slice of history.
Read more
One person found this helpful
Report abuse

Walter Hanney
5.0 out of 5 stars The sound quality is very good
Reviewed in the United Kingdom on May 26, 2019
Verified Purchase
Loved the shows, couldn't find anything that l didn't like
Read more
Report abuse

Page 1 of 1 Start overPage 1 of 1
Previous page
Next page
Pages with related products. See and discover other items: time life music collection
Back to top
Get to Know Us
Make Money with Us
Amazon Payment Products
Let Us Help You
EnglishChoose a language for shopping. United StatesChoose a country/region for shopping.
© 1996-2021, Amazon.com, Inc. or its affiliates