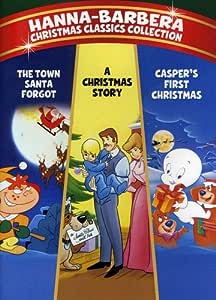 A dog and a mouse head for the North Pole to deliver a lost letter. Hanna-Barbera superstars lend a helping hand to the world’s friendliest ghost. The greediest boy in the world discovers the magic of giving. What could three such different tales have in common? Hanna-Barbera and Santa Claus, that’s what! Hanna-Barbera assembled its mightiest talents of pen and voice to produce one of its first forays into prime-time animated Christmas specials, A Christmas Story, the tale of Goober and Gumdrop’s quest to save Christmas for one little boy. Dick Van Dyke narrates The Town Santa Forgot, based on Charmaine Severson’s beloved poem “Jeremy Creek” about the confusion created by a gargantuan wish list. Casper’s First Christmas sees Casper facing a Christmas Eve eviction when he receives holiday help from the likes of Yogi Bear, Boo-Boo, Huckleberry Hound, Snagglepuss, Quick Draw McGraw, Augie Doggie and Doggie Daddy. This collection includes: A Christmas Story (1971), The Town Santa Forgot (1993), Casper's First Christmas (1979)

4.6 out of 5 stars
4.6 out of 5
81 customer ratings
How does Amazon calculate star ratings?
Amazon calculates a product’s star ratings based on a machine learned model instead of a raw data average. The model takes into account factors including the age of a rating, whether the ratings are from verified purchasers, and factors that establish reviewer trustworthiness.
Top Reviews

Amazon Customer
5.0 out of 5 stars Three rare specials now on DVD
Reviewed in the United States on December 4, 2014
Verified Purchase
I was really only purchasing this for "Casper's First Christmas" as it features Casper, the Friendly Ghost with virtually all of the classic Hanna-Barbera characters like Yogi Bear and Quick Draw McGraw. Though this isn't the best stuff from H-B or of Casper, it is highly watchable considering the time it was made in the late 70s.

"A Christmas Story" was a great surprise. I had seen it when it originally aired, but totally forgot about it. It seems to be a generic special that originally aired in 1972, but also seems like a training ground for the upcoming H-B feature film "Charlotte's Web" which came out in 1973, as the characters are more realistic and fluid than what was typical for the time at H-B.

"The Town Santa Forgot" I have never seen before as it was made in the 80s. Even though I love cartoons, I tended to steer away from the inferior ones by this time as I was getting to be an adult and better stuff was now available on TV and home video. It's surprisingly good, with Dick Van Dyke narrating. I can't say it's excellent but it's highly watchable.

Overall, the three are a welcome addition to your holiday special shelf.

Trevor Thurlow (Ontario, Canada)
5.0 out of 5 stars These Christmas Classics Never Get Old
Reviewed in the United States on November 1, 2013
Verified Purchase
My main reason for getting this DVD was for "A Christmas Story" and "Casper's First Christmas". "The Town That Santa Forgot" was nice, although I found that it really wasn't up to the level of the other two cartoons (Story and Casper were both produced in the 1970's, while Santa is from the early 1990's).

I remember seeing "Caspers First Christmas" on TV back in the 80's, and then it seemed to disappear from TV in the 90's and 2000's. "A Christmas Story" I only saw on TV once back in the early-1990's, and I was glad that I taped it back then since it's become a yearly favorite. Of course now that I have it on DVD I don't need to watch the worn-out VHS copy anymore.

However, its too bad that these Classics were not issued in the usual retail manner, since most people don't realize that they are out. And of course, not everybody's DVD player can playback DVD-R's. (Warner's Archive program uses DVD-R's, so some machines will not read them; also machines that are wearing out will not play the DVD-R's correctly as they need a stronger laser to reflect back at the disc correctly, and if your DVD player did play DVD-R's, but now won't or is skipping on them, then it is time for a new DVD player.)

Ashley Gibson
5.0 out of 5 stars Review for Hanna-Barbera Christmas Classics Collection
Reviewed in the United States on December 7, 2013
Verified Purchase
I bought this for my mom who has wanted Casper's First Christmas for a long time!

The Town Santa Forgot (5 stars)
I really enjoyed this cartoon and liked the moral of the story! It is about a boy who is very greedy and wrote santa a letter with a long list of presents he wanted but he didn't get it. He learns through this however that it is better to give than receive!

A Christmas Story (5 stars)
I loved this cartoon and really enjoyed the characters! It is about a dog and a mouse trying to find santa to make sure a little boy got christmas!

Zebra3
5.0 out of 5 stars Hanna Barberra Christmas classics collection DVD
Reviewed in the United States on December 3, 2016
Verified Purchase
Here is another great classic cartoons of yesterday and it's a throwback to old school animation. I would rather watch this over those Shreck CGI animated features or any other computer animated Christmas they make these days. "Casper's first Christmas" is my favorite and they should really bring this back on television broadcast every Christmas so that the new generations can see some old fashion animation and the other two features is great as well like "A Christmas Story" and "The town Santa forgot". The quality is very blue ray like in quality considering this are just regular DVD.
Read more
One person found this helpful
Helpful
Comment Report abuse

Zachary Lukes
5.0 out of 5 stars Absolutely lovely!
Reviewed in the United States on September 24, 2019
Verified Purchase
I purchased this to watch and enjoy “The Town Santa Forgot.” I used to watch it on Cartoon Network a long time ago. Such a wonderful story about a selfish and greedy boy who learns about the joy of giving. I love when he has a change of heart.
Read more
Helpful
Comment Report abuse

James Hester
5.0 out of 5 stars The Town Santa Forgot is an awesome Christmas story!
Reviewed in the United States on December 9, 2016
Verified Purchase
The Town Santa Forgot is the reason you want this Christmas collection. The other shows are ok and the kids enjoy them. The Town that Santa Forgot is the perfect Christmas movie to teach kids about giving rather than receiving. Dick Van Dyke narrates the story and is an awesome story teller. We saw this on cable a few years back and have been looking for it ever since. So glad we found it here!
Read more
One person found this helpful
Helpful
Comment Report abuse

Deborah Smith
3.0 out of 5 stars Nice collection
Reviewed in the United States on January 18, 2020
Verified Purchase
I bought this for Casper's First Christmas--really like, the other 2 are o.k., in my opinion---and that is just my opinion. Others may like them.
Read more
Helpful
Comment Report abuse

KLR
5.0 out of 5 stars Jeremy Creek!
Reviewed in the United States on January 21, 2015
Verified Purchase
We purchased this primary for THE TOWN THE SANTA FORGOT, which was known in print at JEREMY CREEK. We discovered this during the Christmas marathon on Boomerang a few years ago, and just loved it. Great lesson for our kids about being selfish, and the true meaning of Christmas. CLassic H&B animation style, in a vintage 90's feel. And Dick Van Dyke narrating a clever script only makes it more of a classic we watch over and over again.
Read more
2 people found this helpful
Helpful
Comment Report abuse
See all reviews from the United States

maclean’s ✌️
3.0 out of 5 stars Just a copy.
Reviewed in Canada on February 21, 2020
Verified Purchase
Great show but I wish it was the original and not a burnt copy from Amazon. I hate finding out later that is it just a copy. They scratch so easy.
Read more
Helpful
Sending feedback...
Thank you for your feedback.
Sorry, we failed to record your vote. Please try again
Report abuse

Jenna
5.0 out of 5 stars Casper’s First Christmas
Reviewed in Canada on April 18, 2019
Verified Purchase
I purchased this DVD solely for ‘Casper’s First Christmas’ and was not disappointed. It was one of my favourite Christmas specials from my childhood and brought me back. The other two were a bonus.
Read more
One person found this helpful
Helpful
Sending feedback...
Thank you for your feedback.
Sorry, we failed to record your vote. Please try again
Report abuse

michelle.perry
5.0 out of 5 stars works awesome love it
Reviewed in Canada on January 24, 2017
Verified Purchase
my kids and i love this movie
Read more
One person found this helpful
Helpful
Sending feedback...
Thank you for your feedback.
Sorry, we failed to record your vote. Please try again
Report abuse

Page 1 of 1 Start overPage 1 of 1
This shopping feature will continue to load items when the Enter key is pressed. In order to navigate out of this carousel please use your heading shortcut key to navigate to the next or previous heading.
Back
Next
Pages with related products. See and discover other items: warner archive collection dvd, christmas animated movies, anime classics, anime collection, casper movie