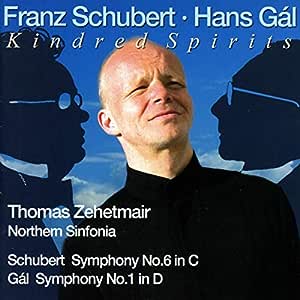 Hans Gal (Composer), Franz Schubert (Composer), Thomas Zehetmair (Conductor), Northern Sinfonia (Orchestra) & 1 more Format: Audio CD
3.9 out of 5 stars 3 ratings
See all 3 formats and editions Hide other formats and editions
Includes FREE MP3 version of this album.&nbspProvided by Amazon Digital Services LLC. Terms and Conditions. Does not apply to gift orders.&nbspComplete your purchase to save the MP3 version to your music library.

Avie s advocacy of the music of Hans Gál has the classical music world taking
notice it is music well worth championing, according to The Sunday Times.
Following a survey of the complete works for solo piano, and last year s
acclaimed releases of chamber works for violin and piano, Avie continues
exploring the composer s oeuvre with the world-premiere recording of his
Symphony No. 1, with Gramophone Award winner Thomas Zehetmair
conducting Northern Sinfonia. This is paired with Franz Schubert s Symphony
No. 6, as Gál was an acknowledged scholar of his 19th century forbearer who
penned the book Franz Schubert and the Essence of Melody, leading some to
consider the composers kindred spirits.

Plenty of rich tonal harmony and adventurous harmonic excursion, together
with a ripe sense of the lyrical. --The Sunday Times

3.9 out of 5 stars
3.9 out of 5
3 global ratings
How are ratings calculated?
To calculate the overall star rating and percentage breakdown by star, we don’t use a simple average. Instead, our system considers things like how recent a review is and if the reviewer bought the item on Amazon. It also analyzes reviews to verify trustworthiness.
Top reviews

mahlerfan
5.0 out of 5 stars Gal's Symphony No. 1 is "busy, beautifully crafted, and teeming with memorable ideas."
Reviewed in the United States on June 6, 2014
Verified Purchase
Austrian composer Hans Gál was featured recently on two BBC3 radio programs, Composer of the Week and Sunday Morning. It is nice to see Gál receiving some long overdue attention. Recordings of Gál’s larger works are just beginning to appear thanks in part to the efforts of the Hans Gál Society and enthusiastic conductors like Kenneth Woods and Thomas Zehetmair who leads the Northern Sinfonia in this world premiere recording of Gál’s Symphony No. 1.

Completed in 1927, Gál’s First Symphony is filled with the exuberance of a man at the height of his fame. The work was awarded a prize in the 1928 International Columbia Graphophone Competition commemorating the 100th anniversary of Schubert’s death and was performed in Vienna and in cities throughout Germany in the late 1920s and early 1930s. The fact that it took more than eighty years to record the work can be attributed to several factors, most notably the 1933 Nazi ban on the performance and publication of music by Jewish composers and the mischaracterization of Gál’s music as “old-fashioned” by certain proponents of the avant garde.

Rob Cowan, host of the BBC3’s Sunday Morning, describes Symphony No. 1 as “busy, beautifully crafted, and teeming with memorable ideas.” Gál’s mastery of contrapuntal writing is evident in the first movement, and Zehetmair’s attention to detail is admirable. Gál’s Haydnesque sense of humor is revealed in the lighter second movement, Burleske. Although Gál had an unwavering commitment to tonality, he, like his compatriots Mahler and Zemlinsky, pushes the limit at times in the heartfelt Elegie which features several lovely solos. Zehetmair’s keen sense of pacing keeps the movement from becoming overly sentimental. The fourth movement, Rondo, begins with a mischievous trumpet call that sets the tone for the energetic finale.

Gál was a great admirer of Schubert. Both men had a gift for lyricism and a devotion to formal clarity. The artful pairing of the two composers symbolizes the beginning and end of an era. In this recording, Zehetmair imbues Schubert’s Symphony No. 6, the Little C major, with elegance and grace and a hint of passion that comes to full flower in Schubert’s later symphonies. Kudos to Simon Fox- Gál for the superb quality of the recording. Highly recommended.

John Marsilia
2.0 out of 5 stars Gal?
Reviewed in the United States on June 12, 2014
Verified Purchase
Read the reviews of gal, was looking forward to discovering a new composer. Was disappointed frankly . Don't see enough individuality in this music. Everything melded into everything else. Sorry
Read more
2 people found this helpful
Helpful
Report abuse
See all reviews