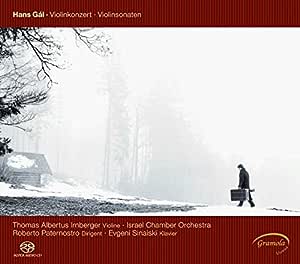 Gramola presents their second production devoted exclusively to Hans Gál. Young Salzburg
violinist Thomas Albertus Irnberger has recorded the Violin Concerto and the two Sonatas
for Violin and Piano with the Israel Chamber Orchestra under its resident conductor, Roberto
Paternostro, and pianist Evgeni Sinaiski. The composer, who was driven into exile in 1938, saw
himself in deliberate opposition to the Second Viennese School and referred to the Viennese
tradition up to Brahms, the edition of whose complete notes he had also supervised.

Kevin Maynard
5.0 out of 5 stars Neglected No Longer
Reviewed in the United Kingdom on November 23, 2017
Verified Purchase
If you’re a composer, merely knowing your trade is never enough. Many a craftsmanlike piece from all periods moulders on archival shelves, as lifeless on the page as it is in the concert halls; maybe it gets dusted off from time to time by earnest musicologists, or ambitious performers anxious to add something new to their repertoire, and it may indeed be mildly pleasant at a single hearing; but more often than not it gets forgotten again very quickly, and deservedly so. Acres and acres of that kind of third-rate stuff survives. It’s the sort of thing that gets classical music a bad name. Even the most meretricious pop music contains more oomph and sheer pizazz. Most neglected classical music should definitely stay that way. But from time to time there’s the exception that proves the rule.

Arnold Schoenberg famously opined, “There is still much good music that can be written in C major.” In other words, music doesn’t have to be atonal to be good. Whether Hans Gál was indifferent or actively hostile to modernism in all its forms is unknown to me. He had forged a very personal Late Romantic idiom quite early on, and his steely integrity on the one hand and will of iron on the other meant that he stuck to it for nigh on sixty years. (His compositional mentor was an out-and-out Brahmsian.) The price he paid, in terms of his musical reputation, at least after his arrival in the UK, was a heavy one. Nevertheless, he remained astonishingly prolific right up to his penultimate decade. His music is at long last beginning to be better known---as it undoubtedly should be. Only time will tell whether he stands in the front rank of ‘great’ 20th century composers; personally I don’t quite see him measuring up to Stravinsky, Schoenberg, Bartok, Shostakovich, Prokofiev, Messiaen et al., though I’m prepared to be convinced otherwise. So far I’ve only got to know well his piano and chamber works. These I’ve played again and again on my iPod and CD player for the past three or four years. On this evidence alone I’m convinced of his musical genius, and of his importance for posterity. One of his operas was revived recently in Edinburgh, where he lived and worked from the 1940s until his death in 1987. I’ve only heard excerpts, but they sound promising. His symphonies I don’t know at all.

This CD demonstrates, at least in the B flat minor Sonata, the heights of which he was capable: it’s a masterpiece, which bears repeated listening—and despite at least there being two other fine versions readily available on record, this is by far the most characterful and sensitive interpretation. (Much, perhaps most of his piano music, consists likewise of genuine ‘masterpieces’: and all of it has been well served by both Leon McCawley and Martin Jones.) The other two works featured here are also pretty wonderful in my humble opinion.

But let's concentrate on the B minor Sonata. It contains the sort of plangent, rich, sensuous Brahmsian harmonies that would have suited any good Mittel-European chamber work from the 1890s. It as if neither the Viennese School nor Stravinsky and Varese had ever existed. What makes it special is the passion, variety and depth exhibited in each of its three strongly characterised movements. The first is sombre, powerful and anguished; the second begins with a spare and ambiguous solo for violin, then modulates into a much more edgy and turbulent competition between both violin and piano---the piano first rippling and glissading alongside a forceful and lyrical violin, and then stabbing jerkily when the melody seems to lose its way before feeling its way with ever-increasing urgency back to the opening song-like motif. The third movement initially seems to have adopted a mood of melancholy introspective resignation and relative calm after the whirlwind that preceded it. A middle passage has the piano spikily spiralling round the violin as if providing a spectral commentary on its ruminative self-questioning before reverting to a more serene series of arpeggios as the violin achieves some kind of resolution, which is where the piece ends---not with a bang, nor a whimper, but rather with a peaceful diminuendo.

Two features of his style that recur over and over are a kind of cool astringency, and what I can only call an abiding sense of mischief. The Viennese sweetness of his more lyrical writing is never in any way schmaltzy; there is too much logic and method to his writing for that. But there is also fire and passion and remorseless drive aplenty. A real musical feast awaits the discriminating buyer. It would be hard to recommend this disc or this composer too highly.