Hans-Martien ten Napel, Ph.D. is an Associate Professor of Constitutional and Administrative Law at Leiden University in the Netherlands, where he is also Research Fellow of the Leiden Law School and Affiliated Member of the Center for the Study of Political Parties and Representation. In addition, he is a Member of the Netherlands Network for Human Rights Research. Before his transfer to the law faculty, he taught at a Department of Political Science and was a Post-Doctoral Fellow at the Minda de Gunzburg Center for European Studies at Harvard University (Cambridge, MA).

In 2014 he was awarded a Research Fellowship in Legal Studies at the Center of Theological Inquiry in Princeton, NJ, which enabled him to be in full-time residence at CTI for the academic year 2014-2015. In 2017 he received a 'seed money grant for frontier research' from the Leiden profile area Interaction Between Legal Systems.

His work has appeared in European Constitutional Law Review, European Public Law, Journal of Interreligious Studies, Journal of Markets and Morality, Muslim World Journal of Human Rights and Oxford Journal of Law and Religion. He was also co-editor and co-author of two recent volumes, Regulating Political Parties: European Democracies in Comparative Perspective (2014) and The Powers That Be. Rethinking the Separation of Powers (2015).

Since 2015, he is a member of the editorial board of the Tijdschrift voor Religie, Recht en Beleid(Journal of Religion, Law, and Policy). In 2017, he published, as the fruit of his research fellowship, the monograph Constitutionalism, Democracy and Religious Freedom. To Be Fully Human (Routledge).
Read more 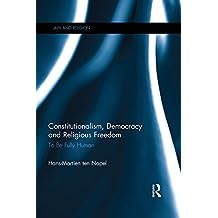 The book examines the major direction in which liberal democracy has developed over the last fifty years and contends that this is not the most legitimate type of liberal democracy for religiously divided societies. Drawing on theoretical developments in the field of transnational constitutionalism, Hans-Martien ten Napel argues that redirecting the concept and practice of liberal democracy toward the more classical notion of limited, constitutional government, with a considerable degree of autonomy for civil society organizations would allow greater religious pluralism. The book shows how, in a postsecular and multicultural context, modern sources of constitutionalism and democracy, supplemented by premodern, transcendental legitimation, continue to provide the best means of legitimating Western constitutional and political orders. 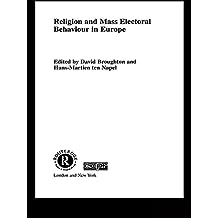 Religion and Mass Electoral Behaviour in Europe (Routledge/ECPR Studies in European Political Science Book 19) Dec 14, 2000
by David Broughton, Hans-Martien ten Napel
$48.95
The onset of a new millennium has given renewed impetus to the study of religion and its place in the secular world. Religion and Mass Electoral Behaviour in Europe is an innovative, cutting-edge study, which focuses on the question of whether - and how - religion continues to influence and shape electoral behaviour across Europe.
With exceptional detail, this book presents empirical data drawn from a range of country case studies to provide examples of different religious experiences and relationships.
Read more
Other Formats: Hardcover