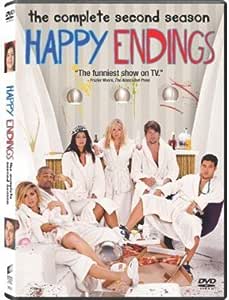 Zachary Knighton (Actor), Elisha Cuthbert (Actor) Rated:
NR
Format: DVD
4.7 out of 5 stars 220 ratings
Available at a lower price from other sellers that may not offer free Prime shipping.

For a TV sitcom that only just squeaked out its pilot embryo and made it into ABC's schedule as a midseason replacement, Happy Endings certainly seems to be having a genuinely happy beginning and middle. The Friends-like ensemble formula of three girls and three guys living through their 30s in a Chicago-via-Hollywood sound stage setting (one camera, no audience) hit its stride and developed a following quickly when its first 13 episodes were crammed on the air during spring and summer of 2011. Season two unfolded at a more unhurried pace with a full batch of 21 episodes and a sigh of relief after the show was picked up for the fall. That season three debuted in 2012 proved the show has a sturdy backbone of support from fans and the network, and this second-season set affirms how Happy Endings found its footing and developed a distinctive voice that's mostly mundane but unabashedly likable. The ensemble is cute, quirky, and easy on the eyes, and if its attempted edginess doesn't slice very deeply, at least it maintains enough upbeat patter to distract from the generic mold. Eliza Coupe and Elisha Cuthbert play sisters Jane and Alex, with Damon Wayans Jr. and Zachary Knighton as Brad and Dave, their husband and jilted fiancé, respectively. Rounding out the sextet is former SNLer Casey Wilson as the perpetually single Penny, and Adam Pally as the slovenly, gay, irresponsible, and oft-obnoxious Max. Playing mixed-up yet well-bred characters who have been BFFs since college, all the actors bring a mixture of stupidity, ego, and lovable wit. There is good chemistry that circulates among them, which is why the show was enough of a hit that we wanted to keep on hanging out with them. The scripts don't go much deeper than problems with Penny's new condo, Dave and Max's foibles as roommates, Jane and Brad's implied bedroom kinks, and Alex's trouble keeping her boutique from going bankrupt. The through line of Alex and Dave's at-the-altar split and how they're back to being friends in the aftermath isn't so much of a guiding premise in the season-two episodes. Rather, all six of them rely on an equality of ribbing, teasing, and falling back on the loving bond that makes their connections thrive. Described that way, Happy Endings sounds kind of like a gag-inducing torment to sit through. Thankfully, the scripts and appealing personas rescue the routines and are structured tightly with jokes that fall together with intelligence and ditziness in equal measure. There's a nice assortment of guest shots with actors and comedians who duck in at opportune moments. Matt Besser, Rob Riggle, Brian Austin Green, Bobby Moynihan, Michael McKean, and Megan Mullally are among the faces that augment the ensemble, as well as Brent Musburger, Ed Begley Jr., Colin Hanks, and Fred Savage (a staff director for the show), who all waltz through as versions of themselves. The only extras in the three-disc set are about 20 minutes of outtakes and deleted scenes that end things nicely for a spare, funny, innocuous show that does just fine on its own. --Ted Fry

4.7 out of 5 stars
4.7 out of 5
220 global ratings
How are ratings calculated?
To calculate the overall star rating and percentage breakdown by star, we don’t use a simple average. Instead, our system considers things like how recent a review is and if the reviewer bought the item on Amazon. It also analyzes reviews to verify trustworthiness.

Leonard
5.0 out of 5 stars Cancelled way too soon
Reviewed in the United States on August 10, 2015
Verified Purchase
Season 2 is just as funny as the first season. Alex and Dave finally put aside their animosity towards each other (and in one episode, they even hook up). Brad and Jane go through the trials and tribulations of marriage. Penny is slightly more mature. Her hippie mother makes a cameo (Megan Mullally from Will and Grace and Parks and Recreation. She is so freaking hilarious). Max and Dave have a Mutt and Jeff relationship. The funniest episode of the season was definitely the Valentines episode.

I seriously don't know why they cancelled this show. Was it because there was an interracial couple? Or is it because people simply don't watch scripted comedies anymore?

James A. Newton, Jr.
4.0 out of 5 stars The Hilarity Continues!
Reviewed in the United States on October 15, 2016
Verified Purchase
The hilarity continues! Great second season with nearly twice the amount of episodes over the first season. This is truly a sitcom that revels in its own "sitcominess." Pay attention because the jokes and references come at you FAST! My only complaint is with the rather cheap packaging--3 discs stacked on top of each other instead of in 3 separate trays. Still, way worth it at this cheap price!
Read more
Helpful
Comment Report abuse

Joey P.
5.0 out of 5 stars Completely Underrated
Reviewed in the United States on May 20, 2014
Verified Purchase
I'm an obsessive fan of this show, and from the moment I heard it was cancelled I knew I had to snatch up the DVD releases right away. Now the DVD casing, and formatting is standard so I won't go into that much. The show is hilarious, and totally pop-culture savvy. For someone like me it was the perfect sitcom. Goofy, and smart with a naturally gifted cast of hilarious individuals. If you're a fan of smart comedy or unjustifiably cancelled television shows, this might be for you.
Read more
Helpful
Comment Report abuse

K C
5.0 out of 5 stars Happy Endings was so good
Reviewed in the United States on January 9, 2018
Verified Purchase
I've said it before and I'll say it again....Shame on ABC and Disney. Bring this show back! Happy Endings was so good!! Seriously it was such a fun show. Amazing Cast
Read more
One person found this helpful
Helpful
Comment Report abuse

Kindle Customer
5.0 out of 5 stars so funny!
Reviewed in the United States on January 25, 2015
Verified Purchase
This show is wildly underrated. It is laugh out loud hilarious and draws many parallels and similarities to Friends. I'm a huge fan of both shows and I think this a great purchase for a gift, or if you enjoy likeable characters in ridiculous situations.
Read more
Helpful
Comment Report abuse

b schnabel
5.0 out of 5 stars Funny
Reviewed in the United States on May 8, 2020
Verified Purchase
Love this show, very funny. Wish they didn't cancel it.
Read more
Helpful
Comment Report abuse

JohnDrake67
5.0 out of 5 stars Genius
Reviewed in the United Kingdom on April 2, 2017
Verified Purchase
Officially the second best comedy series of all time, after Fawlty Towers. There is no debate, sorry, it just is. Do not disagree with me, just watch and enjoy.
Read more
One person found this helpful
Report abuse

CJE
1.0 out of 5 stars One Star
Reviewed in the United Kingdom on September 25, 2017
Verified Purchase
DVD was scratched
Read more
Report abuse

SALAAM
5.0 out of 5 stars Happy >.>
Reviewed in Canada on April 12, 2016
Verified Purchase
Purchased this for my girlfriend. No seriously.. it's not for me... but secretly I have to admit I enjoy watching it lol. Very funny show.
Read more
Report abuse
See all reviews