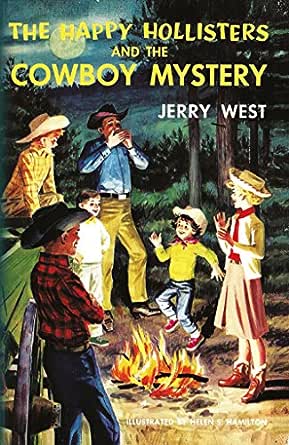 You've subscribed to The Happy Hollisters! We will preorder your items within 24 hours of when they become available. When new books are released, we'll charge your default payment method for the lowest price available during the pre-order period.
Update your device or payment method, cancel individual pre-orders or your subscription at
Your Memberships & Subscriptions
There was an error. We were unable to process your subscription due to an error. Please refresh and try again. 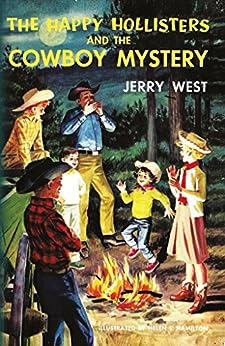 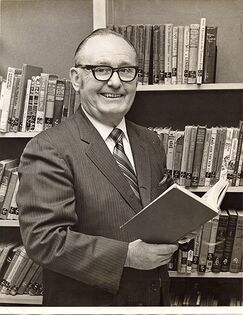 The Happy Hollisters and the Cowboy Mystery (Volume 20) Kindle Edition 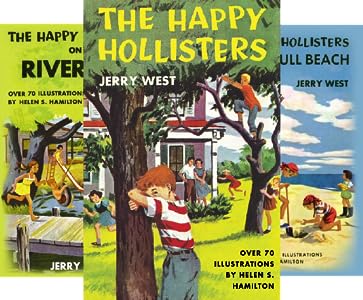 The Happy Hollisters by Jerry West was actually written by Andrew E. Svenson, a prolific yet somewhat anonymous, writer of books for children. Jerry West was the pen name assigned to Svenson when he started writing The Happy Hollisters for the Stratemeyer Syndicate, a book packager well-known for its development of children's book series including Tom Swift, The Bobbsey Twins, The Hardy Boys, and Nancy Drew. Many of these series were intended to have long publishing lives, and were written by multiple authors using the same pseudonym. The Happy Hollisters, however, were all written by Andrew Svenson, whose identity as Jerry West was kept secret until several years after his death in 1975. Andrew Svenson was born in Belleville, NJ, in 1910, and his interest in writing started early. He was editor of his high school newspaper and yearbook at Barringer High School in Newark, and then went on to study Creative Writing at the University of Pittsburgh. After his graduation in 1932, he worked as a reporter and editor for the Newark Star Eagle and the Newark Evening News. Andrew Svenson was encouraged by his friend Howard Garis (author of Uncle Wiggily) to try his hand at juvenile fiction. He joined the Stratemeyer Syndicate as a writer in 1948, where he contributed to established series as Franklin W. Dixon (The Hardy Boys) and as Laura Lee Hope (The Bobbsey Twins). The first volume in his own original series, The Happy Hollisters, was published in 1953 by Doubleday & Company, and he was made a partner in the Stratemeyer Syndicate in 1961. As he wrote and developed 33 titles in The Happy Hollisters, he was also creating additional series for children under other pen names: Bret King by Dan Scott and The Tollivers by Alan Stone. Under various pseudonyms, Andrew Svenson wrote more than 70 adventure and mystery novels for children, which were published in 17 languages and sold millions of copies. The Hollister family was modeled on his own family and he often used Svenson family events and travels as the foundation for The Happy Hollisters books. He also kept copious newspaper clippings for story ideas, and interviewed hundreds of school children and teachers for additional suggestions. These ideas were then worked into his storylines, adding an educational element that was appreciated by parents and educators alike. The children loved the stories for their elements of danger and excitement geared to their comprehension level. --This text refers to the paperback edition.

Kwork
5.0 out of 5 stars Excellent clean mystery for elementary grade readers with suspense, good storytelling, cowboys, horses, and bags of gold.
Reviewed in the United States on May 1, 2018
Verified Purchase
Those elementary age young readers who enjoy good old fashioned storytelling, and who don't mind a good clean mystery, will delight in reading the adventures of the Happy Hollisters. In this 20th mystery adventure, we get to see life among the cowboys in a small town in Nevada as the Hollister children, with their mother, visit some friends they made at the beginning of the book. With suspense, possible buried treasure, good and bad cowboys, bags of gold, and suspenseful action, this comes highly recommended.
One caveat: since these books were written many years ago, today's children need to remember that back then, those of Native American origin were called Indians. Remembering that, a scene from early on won't confuse today's younger readers who may not know that in this age of overly political correctness.

l G onzales
5.0 out of 5 stars Cowboys
Reviewed in the United States on May 14, 2018
Verified Purchase
This was a great book I enjoyed it very much and especially the characters I hope to read more about this same author,it was very exciting and also very heartwarming,thanks for the great book
Read more
One person found this helpful
Helpful
Comment Report abuse

Guy Bernard
5.0 out of 5 stars Great, as expected
Reviewed in the United States on May 22, 2018
Verified Purchase
My Grandkids said this was REALLY good, and I agree.
We’ve read several of the books in this series and so far they’ve all earned top ratings—from them AND me!
Read more
One person found this helpful
Helpful
Comment Report abuse

DGL
5.0 out of 5 stars Classic Story
Reviewed in the United States on July 12, 2018
Verified Purchase
Love the Happy Hollisters. If you like The Box Car Children, you will enjoy the Happy Hollisters!
Read more
One person found this helpful
Helpful
Comment Report abuse

Kindle Customer
4.0 out of 5 stars A good book for children as long as they understand they don't have this much freedom to "roam."
Reviewed in the United States on July 10, 2018
Verified Purchase
A good book for young children. Of course, no child today would experience the freedom that these fictional children enjoy! Hopefully, a child reader understands this.
Read more
Helpful
Comment Report abuse
See all reviews

M. Dowden
5.0 out of 5 stars Still A Fun Read
Reviewed in the United Kingdom on April 29, 2018
Verified Purchase
Written by Andrew E Svenson, this book like all the others in the series were put out under the pseudonym of Jerry West, and were published by the Stratemeyer Syndicate, who were to have a huge influence on children’s reading habits in the US. Here not only do we have the original stories, but also those wonderful illustrations by Helen S Hamilton, that accompanied them.

Here then we meet the Hollisters on their twentieth adventure, that should please children as much nowadays as when they were first penned. When there is nearly an accident by two of the children of the Hollister clan, with a car which contains the Blair family, so the two families become friendly, and it isn’t long before they are headed off to Nevada and the Blair’s ranch the Tumbling K Ranch. There are mysterious goings on there, what with antelopes going missing, and strange lights seen in the mountains, but will our sleuth family be able to solve the case?

Full of incident and adventure we follow mainly the children of both families as they seek out clues to solve the mystery and accompanied by an old cowboy go off into the mountains to catch anyone involved with the mysteries and crimes going on in the area. Being followed on their trip to Nevada, and a strange new hand at the ranch so the children have to work out who is friend and who foe, before they can safely navigate their way through the mystery.

With this series published between 1953-1969 Svenson wanted to have something that would encourage children to read, and so the reading age for these books is apparently from 4-12 years old, mirroring the ages of the children of the Hollister family. It has to be said that perhaps four years of age will probably be too young for children to read themselves, but they should still enjoy having this or the others in the series read to them.

These do teach children some things, such as here about cowboys, and the kind of work that may go on on a range, as well as about snow in the mountains and such like. This, as with other books in the series are easy to read and very entertaining, making for some great escapism, and I must admit that whether you read them aloud to children or just to yourself, you will find yourself being entertained just as much as younger ones.
Read more
One person found this helpful
Report abuse
See all reviews