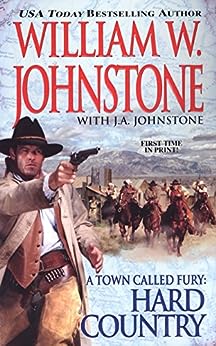 The bestselling Western author continues his bold saga of the American frontier, where one man fights for the very survival of the town called Fury.

It’s hard country, but the pioneers of Fury (Pop. 112) are banding together to make it a home. With barren lands, blinding dust storms, drought, hostile Apaches, and violent bands of cutthroat outlaws against them, death is never far away. It’s enough to make Jason Fury, whose father the town was named after, ride out for San Francisco. But a fiery young redhead named Megan McDonald keeps him Arizona bound—and just in time. When another Apache attack finds the marshal’s badge pinned to Jason’s unwilling chest, he turns out to be the right man to do whatever it takes—for . . .

Praise for the novels of William W. Johnstone

“[A] rousing, two-fisted saga of the growing American frontier.” —Publishers Weekly on Eyes of Eagles

“There’s plenty of gunplay and fast-paced action as this old-time hero proves again that a steady eye and quick reflexes are the keys to survival on the Western frontier.” —Curled Up with a Good Book on Dead Before Sundown
Read more
Previous page
Next page
Next 3 for you in this series See full series
Total Price: $11.97
Books In This Series (4 Books)
Complete Series
A Town Callled Fury
Kindle Edition
Page 1 of 1Start OverPage 1 of 1
Previous page
Next page

William Wallace Johnstone (1938-2004), born in southern Missouri, was a prolific American author, mostly of Western, horror, and survivalist novels. He began writing in 1970 but had his first novel, The Devil's Kiss, published in 1979. After his death, it was announced that a carefully selected author had been chosen to carry on his legacy. J. A. Johnstone is continuing William W. Johnstone's series.

Richard Rohan is a stage, film, and voice-over actor who has narrated hundreds of audiobooks over the last decade, in every genre. He is particularly proud of his work as director and performer on the acclaimed Space Fantasy audio drama series Deathstalker.

Thomas Penny is an audiobook narrator whose readings include The Divine Conspiracy by Dallas Willard, Fighting for America by Christopher Moore, and Forged by Fire by Sharon M. Draper, among others.

Nanette Savard is an accomplished stage and film actress. She is an active voice-over performer who has narrated hundreds of audiobooks in every genre, garnering much critical acclaim.

Ivan Crissman
3.0 out of 5 stars Repeated storyline from Town called Fury
Reviewed in the United States on March 22, 2019
Verified Purchase
What in the world? at least half of this book is a near duplication of A Town Called Fury. the beginning was new and the final scenes were new but the middle...nealy verbatim.. if you haven't read the first book, you will likely enjoy this second book. I would not give it more than three stars because of the repetition.
Read more
One person found this helpful
Helpful
Report abuse

Dennis F. Pelto
5.0 out of 5 stars Excellent Book
Reviewed in the United States on April 21, 2013
Verified Purchase
This was a very good Book, I really enjoyed having bought this book and reading it. I have bought quite a few of this Author's books, and have enjoyed 99 percent of them. If you like reading Westerns, then you will like reading this book.
Read more
One person found this helpful
Helpful
Report abuse

Matt Dodson
1.0 out of 5 stars Duplicate to part of "A Town Called Fury"?
Reviewed in the United States on October 15, 2017
Verified Purchase
The content of the Kindle file I received was the same as the latter part of "A Town Called Fury". Perhaps I got a bonus when I ordered the first book. Amazon seemed willing to refund the purchase price.
Read more
Helpful
Report abuse

Smug
4.0 out of 5 stars The second book of the "A Town Called Fury" trilogy
Reviewed in the United States on October 16, 2013
Verified Purchase
The second of a trilogy by William W. Johnstone, J.J. Johnstones uncle and mentor. Try to read A Town Called Fury first, and then follow this one up with Redemption. Good reading.
Read more
Helpful
Report abuse

Neal
5.0 out of 5 stars fun
Reviewed in the United States on March 22, 2013
Verified Purchase
"Excellent product and delivered as described. This seller was quick to ship the product was in great condition when it arrived. Will definitely be back to buy more. Thank you"
Read more
Helpful
Report abuse

Rev Beau
5.0 out of 5 stars Hard Country by William Johnstone
Reviewed in the United States on January 31, 2012
Verified Purchase
Great service from Amazon and it's stores. The book was great as was the whole 4-book series "A Town Called Fury." William Johnstone has to be the best western writer around!!!
Read more
Helpful
Report abuse