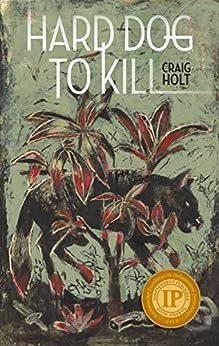 Craig Holt is the author of three books, four screenplays, and a whole mess of short stories. His novel Hard Dog to Kill was a finalist in both the Pacific Northwest Writer's Association Literary Competition, and the Colorado Gold Writing Contest. When he is not scribbling in the pre-dawn hours, he is an avid (obsessive?) reader. By day he is a professional coffee geek. Every two years he gets his tongue re-certified. You know - for the coffee business. (Yeah. I know...) In a previous life he was an expedition leader for an eco-tourism company. Between that job and the coffee gig, he has been lucky enough to visit more than 70 countries, with stops on all of the continents. Because he believes that it's better to wear out than to rot he has participated in destructive sports all his life, including (but not limited to) football, wrestling, rugby, soccer, and Tae kwon do. He has completed marathons, iron-distance triathlons, and ultra-marathons. Craig lives in Seattle with his incredible wife and kids, in an old house full of books. --This text refers to an alternate kindle_edition edition.

Keith Hayward
5.0 out of 5 stars HARD DOG TO KILL was an excellent read. Drama
Reviewed in the United States on February 26, 2018
Verified Purchase
HARD DOG TO KILL was an excellent read. Drama, intrigue and action (plenty) but what really drew me in was the detailed environment and world view in the story, that only can come from someone that has lived, seen and survived these particular landscapes. Beautiful and gritty at the same time, edge of your seat action with characters that bring you deep into their own stories and experiences that create an atmosphere of both awe and excitement for each of their particular paths as the story develops. Lots of cliff hangers and anticipation for me with how the story would wind itself up. I can hardly wait for another chapter in this story or even another tale altogether from Craig Holt. Fantastic.
Read more
2 people found this helpful
Helpful
Report abuse

alv6
4.0 out of 5 stars Vivid images, compelling protagonist
Reviewed in the United States on November 28, 2017
Verified Purchase
I love books with characters who are out of place culturally. It seems the author has spent significant time outside his own culture, and his descriptions show his depth of observation in their ability to conjure up a scene. "In the gaps between buildings, hefty women guarded rickety tables of everything from cell phone chargers to chewing gum. Their wares were lit by tin paraffin lamps the size of coffee cups that bathed the passing crowd in weak orange light."

There were also parts that had me laughing, usually from Stan's witty reflections. "The sober part of me shouted Stanley, you are a boob!" Not to mention, I learned plenty of new vocabulary: hirsute! veldt! middens! tuckpointing! cordite!

I finished this book over a long weekend, because Stan is a compelling and endearing character (despite his terrible dark side) and that makes the reader want to see how he makes out. A very worthwhile read, and I look forward to whatever Holt publishes next.
Read more
One person found this helpful
Helpful
Report abuse

Sheller
5.0 out of 5 stars A doozy of a thriller
Reviewed in the United States on December 14, 2017
Verified Purchase
Two quotes came to mind while I sped through this what’s-going-to-happen-next, I’m-scared-of-what’s-going-to-happen-next thriller: Mike Tyson’s, “Everyone has a plan ‘till they get punched in the mouth” and “Nancy Lemann’s “There’s a lot of human condition going around.” This book has both violence and human condition in spades, but it’s not gratuitous. Both aspects add realism to this story set in modern-day Congo with an (at-times) unreliable 1st-person narrator: Stan Mullens, a mercenary and ex-military guy sent to track down someone who has, ostensibly, stolen company mining secrets.

I read this book in three days – what’s not to like about an interesting story, intriguing characters, descriptive, bone-chilling settings, and hilarious dialogue? Oh, and diamonds. Lots of diamonds.

If you are looking for a book that will defy categorization, make you laugh—loudly—out loud, will chew up and spit out any preconceived idea you had of [take your pick: the Congo, ex-military, 1st-person narrative, bad guys, good guys], then this is your book. I look forward to reading the sequel (and there’d better be a sequel!).
Read more
One person found this helpful
Helpful
Report abuse

Carrie Penley
5.0 out of 5 stars Literary Thriller + Jungle Noir
Reviewed in the United States on January 11, 2018
Verified Purchase
Searching for a literary thriller with noir themes and a lush jungle setting? Look no further! This book isn’t your average mercenary thriller, it is a story about people and morality and how the choices we all make shape our human experience.

Hard Dog to Kill is about Stan and Frank, two mercenaries who are sent into the Congo jungle to hunt down and kill a man who has wronged their boss. Along the way, Stan begins to question his own morality, trying to convince himself that despite all of his bad deeds, he’s the good guy. Even with Stan’s brutal history, I was drawn to his sharp intellect and black humor.

Craig Holt is a master storyteller, painting a vivid picture of one of the most remote parts of Africa. Hard Dog to Kill is gritty and insightful yet also darkly funny. I found myself laughing and cringing in suspense in equal measure.

This is the kind of book that warrants multiple readings, with lush settings and incredibly deep and complex characters. Highly recommended!
Read more
Helpful
Report abuse

swekate
4.0 out of 5 stars Rabbit Hole of a Read!
Reviewed in the United States on February 20, 2018
Verified Purchase
I’ve never read anything quite like this. And in a world overpopulated with the same stories—that’s a pretty exciting statement. Hard Dog To Kill is complex and disturbing, a challenging journey through the jungle that is not for the weak of heart or stomach. The narrator and the story itself are a mix of impossible contradictory elements: violent, poetic, darkly funny, grittily realistic, magic tinged, and depressingly filled with hope. What??? Yeah—it’s a seriously trippy ride, but one worth taking, as Holt has it all under control.
Read more
Helpful
Report abuse

zibgood
5.0 out of 5 stars I really enjoyed this book
Reviewed in the United States on April 12, 2018
Verified Purchase
I really enjoyed this book. I found myself going to bed early just to I could dive into it, and my husband noted that I was really tearing through the book. I love the conflicted main character and the hilarious/dire details of living and working in a developing country. I'll be keeping my eye out for Hard Dog to Kill ii.
Read more
One person found this helpful
Helpful
Report abuse

caleach
5.0 out of 5 stars Cultural realism and good old fashioned shootm up fun.
Reviewed in the United States on November 23, 2017
Verified Purchase
As a fellow coffee guy I have had the pleasure of traveling to similar places contained in this story, though not as dangerous or remote. He conveyed a sense of realism you can only get thought first hand travel experience.
I hope there is a sequel in store for this character.
Read more
Helpful
Report abuse

Lana Toogood
5.0 out of 5 stars Vivid, insightful and haunting
Reviewed in Australia on November 12, 2017
Verified Purchase
Buckle up for a cracker of an adventure with Craig Holt’s debut novel ‘Hard Dog to Kill’. Set in the formidable Congo, the story follows Stan and Frank, two mercenaries contracted by a Chinese mining company to assassinate ex-company man Tonde Chiora, accused of stealing important company mining technology. Frank’s lust for blood, drugs and money makes him an unlikely partner for charismatic, bookish and (mostly) sober protagonist Stan, but now more than ever, the long-time brothers in combat must overcome their differences to find out which of the major players can be trusted, while the ever-elusive facts become increasingly enshrouded in fiction. The jungle is a character entirely of its own as oppressive heat, aggressively abundant flora and deadly animal inhabitants all threaten their mission at every turn. Holt’s prose is vivid, witty, and often profound, and he perfectly balances fast-paced action with heart-rending, emotional scenes. The novel is ultimately about undying hope in the face of overwhelming odds, and explores ideas about the true price of our dreams, which may indeed take the shape of our living nightmares. An enthralling read even for non-lovers of adventure stories.
Read more
Report abuse
See all reviews
Back to top
Get to Know Us
Make Money with Us
Amazon Payment Products
Let Us Help You
EnglishChoose a language for shopping. United StatesChoose a country/region for shopping.
© 1996-2021, Amazon.com, Inc. or its affiliates