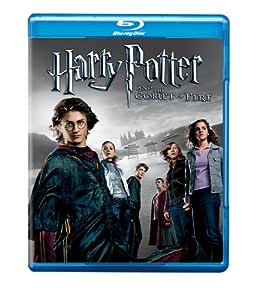 Harry Potter and the Goblet of Fire [Blu-ray]

Harry Potter and the Goblet of Fire (BD)

The latest entry in the Harry Potter saga could be retitled Fast Times at Hogwarts, where finding a date to the winter ball is nearly as terrifying as worrying about Lord Voldemort's return. Thus, the young wizards' entry into puberty (and discovery of the opposite sex) opens up a rich mining field to balance out the dark content in the fourth movie (and the stories are only going to get darker). Mike Newell (Four Weddings and a Funeral) handily takes the directing reins and eases his young cast through awkward growth spurts into true young actors. Harry (Daniel Radcliffe, more sure of himself) has his first girl crush on fellow student Cho Chang (Katie Leung), and has his first big fight with best bud Ron (Rupert Grint). Meanwhile, Ron's underlying romantic tension with Hermione (Emma Watson) comes to a head over the winter ball, and when she makes one of those girl-into-woman Cinderella entrances, the boys' reactions indicate they've all crossed a threshold.

But don't worry, there's plenty of wizardry and action in Goblet of Fire. When the deadly Triwizard Tournament is hosted by Hogwarts, Harry finds his name mysteriously submitted (and chosen) to compete against wizards from two neighboring academies, as well as another Hogwarts student. The competition scenes are magnificently shot, with much-improved CGI effects (particularly the underwater challenge). And the climactic confrontation with Lord Voldemort (Ralph Fiennes, in a brilliant bit of casting) is the most thrilling yet. Goblet, the first installment to get a PG-13 rating, contains some violence as well as disturbing images for kids and some barely shrouded references at sexual awakening (Harry's bath scene in particular). The 2 1/2-hour film, lean considering it came from a 734-page book, trims out subplots about house-elves (they're not missed) and gives little screen time to the standard crew of the other Potter films, but adds in more of Britain's finest actors to the cast, such as Brendan Gleeson as Mad-Eye Moody and Miranda Richardson as Rita Skeeter. Michael Gambon, in his second round as Professor Dumbledore, still hasn't brought audiences around to his interpretation of the role he took over after Richard Harris died, but it's a small smudge in an otherwise spotless adaptation. --Ellen A. Kim