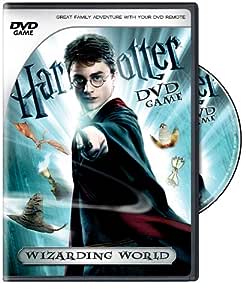 Rated:
NR
Format: DVD
4.1 out of 5 stars 64 ratings
Available at a lower price from other sellers that may not offer free Prime shipping.

This is a sequel to the current Harry Potter Hogwarts Challenge game. The player is back at Hogwarts, attending years four, five, and six, and engaging in activities incorporating elements from the fourth, fifth, and sixth films. Because the fiction for these books and films explores areas outside Hogwarts, to make the new game more interesting, we propose that gameplay include such areas as well. Thus, whilst the Harry Potter Hogwarts Challenge game focused primarily on classroom gameplay, the sequel would feature classroom gameplay and activities which take place in Harrys world outside Hogwarts. As with the previous game, the player must successfully complete the activities associated with a particular year before moving on to the next, and each gameplay activity will be set up through establishing shots/location clips from the films, with narration providing any instructions or other information relevant to that activity. Students finish each year and advance to the next by completing a year End Challenge inspired by a pivotal event from each of films four, five, and six, respectively. The first player to complete each activity for all three years will be allowed to play a bonus activity, and will win the game. All you need is a DVD player and remote to play. No game board required. 1-4 players 14 activities

Harry Potter fans, prepare to challenge yourself or one another to a competition of reflexes, map navigation, hidden-object location, puzzles, potion making, spell selection, and the chronological organization of scenes from the fourth through sixth Harry Potter films. As students of Hogwarts, players must make their way through their fourth, fifth, and sixth years of study by excelling at specific tasks and passing year-end challenges. After selecting the number of players (one to four) and an appropriate difficulty level for each participant, players select the Hogwarts house they wish to represent, and the academic session begins. The fourth year of study at Hogwarts includes a search for hidden objects in Dumbledore's crowded office, a tricky test of navigation using the Marauder's Map, and the Quidditch World Cup Escape, in which players must weave their way between a maze of tents to escape the Death Eaters and arrive safely at the Weasley tent. Steer a flying dragon for the final exam, and it's on to year 5 to learn ear lowering and voice recognition, finish a three-by-three pattern grid to gain entrance to the ministry of magic, and pick the appropriate spells in the heat of battle. If players can avoid the falling prophesies in the hall of prophecy, they continue on to their final year of study, in which they search for magical items, put scenes from all three movies in chronological order, and learn how to reverse problem spells by remembering and matching a succession of symbols and ingredients. The year-end final is an apparition test that challenges players' reflexes. The first player to complete all three years of study enters into a bonus round of concentration dubbed "The Pensive," in which the player must seek out a specific movie memory to match the Narrator's cryptic description. Several of the games share marked similarities, specifically those in which players must follow a directional indicator or search for hidden objects, but there is enough variety to entertain players throughout all three levels of the game. Of course, a DVD game is not quite like a game for Xbox or PS3, because using the remote creates a pause in the action, but it's still fun interactive entertainment that allows up to four people to play, each at an appropriate difficulty level, with only one remote. (Ages 8 and older) --Tami Horiuchi

4.1 out of 5 stars
4.1 out of 5
64 global ratings
How are ratings calculated?
To calculate the overall star rating and percentage breakdown by star, we don’t use a simple average. Instead, our system considers things like how recent a review is and if the reviewer bought the item on Amazon. It also analyzes reviews to verify trustworthiness.
Top reviews

Linda L. Ouellette
5.0 out of 5 stars Fun Game for Tweens & Potter Fans!
Reviewed in the United States on January 16, 2019
Verified Purchase
Perfect game for my 10 year old grandchild who is a Potter fan! She loves it! It is easyv to understand and play for her age.
Read more
Helpful
Comment Report abuse

Joan Fowler
5.0 out of 5 stars Perfect Family Game!
Reviewed in the United States on March 20, 2017
Verified Purchase
This is an awesome game. I played it with my son & grandson & considering it is played on your DVD player & is not that hi-tech, we loved it! Great for a family. Loved it so much I ordered another!
Read more
Helpful
Comment Report abuse

Mojo
5.0 out of 5 stars Great game!
Reviewed in the United States on March 14, 2018
Verified Purchase
OMGosh! This interactive Harry Potter game was the perfect gift for our grandchildren. They play it several times everyday. I just wish there were more Harry Potter interactive DVD games for purchase!
Read more
Helpful
Comment Report abuse

Mrs. Jessie Campbell
5.0 out of 5 stars harry potter wizarding world dvd game
Reviewed in the United Kingdom on August 23, 2013
Verified Purchase
I've had great fun with it as I have not the equipment to use for the book of spells
this is the next best thing

Barbara J. Eastveld
2.0 out of 5 stars Harry Potter DVD game
Reviewed in Canada on February 1, 2013
Verified Purchase
Pathetic. Slow to respond to remote or mouse clicks, repetitive and no interactive help. HOS was very poorly done. Game interspersed with clips from the Harry Potter movies that often didn't fit the situation. Kept going around in circles and couldn't progress because no help or hints. No fun.
Read more
Report abuse