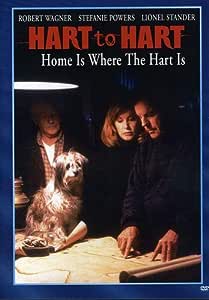 Hart to Hart: Home is Where the Hart Is

When a mentor and friend of Jennifer's dies, she and Jonathan return to the sleepy town where Jennifer once lived and worked as a reporter. Nearly immediately, they discover that all is not right within this picturesque town. The town's economic troubles pale next to the danger the Harts find themselves in as they try to sort out whether their friend's death was murder, and what sinister secrets may lie behind the truth. With a great cast of guest stars, including Maureen O' Sullivan, Howard Keel, and Roddy McDowall, the stars of "Hart to Hart", Robert Wagner, Stefanie Powers, and Lionel Stander, reprise the roles and chemistry that made this hit 1980's television show such a classic. Newly remastered.

This product is expected to play back in DVD Video "play only" devices, and may not play in other DVD devices, including recorders and PC drives.

leslie fine
5.0 out of 5 stars Really good for Hart to Hart fans
Reviewed in the United States on March 13, 2019
Verified Purchase
Everything Hart 2 Hart is close to my heart. The stories are always first rate and so are the actors. No one better than Stefanie Powers and Robert Wagner.
Read more
One person found this helpful
Helpful
Comment Report abuse

Bubbles
5.0 out of 5 stars Great movie!
Reviewed in the United States on January 13, 2012
Verified Purchase
As expected from the Hart to Hart Tv Show, Stephanie Powers and Robert Wagner still have great chemistry and it's apparent in this movie. It's the typical type of Hart to Hart show just made into a longer version. It's fun, entertaining and mindless. I love watching Stephanie and Robert together. Clean fun and good tv. I'd recommend it to all.
Read more
11 people found this helpful
Helpful
Comment Report abuse

Robert D. Brown
5.0 out of 5 stars Five Stars
Reviewed in the United States on April 4, 2018
Verified Purchase
Everything was great and I love the fast service.
Read more
One person found this helpful
Helpful
Comment Report abuse

A little of this; a lot of that!
5.0 out of 5 stars Loved the show! Love these TV movies! Always great entertainment!
Reviewed in the United States on September 23, 2015
Verified Purchase
Loved the show and love these TV movies. Great acting, beauitful scenery always! The way entertainment should be!
Read more
One person found this helpful
Helpful
Comment Report abuse
See all reviews

Kenneth Norris
5.0 out of 5 stars Hart to Hart: Is one of my favorite TV shows. This was absolutley great!
Reviewed in Canada on April 27, 2014
Verified Purchase
This was the 2nd in the Movie TV series. It had better chemistry then the first one! It had a great angle for us on the couch! We can tell right away what is what! But this one was full of surprises! A good one! I recommend this one for sure! Love all the series with Robert Wagner, and Stephanie Powers, etc. Great Chemistry! That is indeed the secret of this wonderful series!