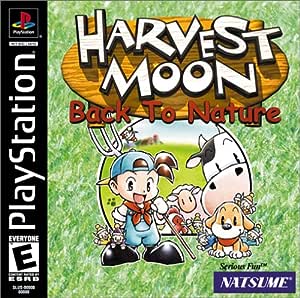 Harvest Moon: Back To Nature

Harvest Moon: Back to Nature is a different sort of game. Instead of blasting aliens or scoring touchdowns, players plant seeds, care for crops, interact with villagers, and search for a mate. This is a role-playing game that features gameplay that's nonlinear and in real-time. To help your ranch become successful, befriend the Harvest Sprites. There are over 50 characters with which you can interact. You can attend festivals, and compete in events like Chicken Sumo and the annual Town Tomato Fight. Collect and cook different recipes--even create your own dishes to impress the ladies.

4.2 out of 5 stars
4.2 out of 5
110 customer ratings
How does Amazon calculate star ratings?
Amazon calculates a product’s star ratings based on a machine learned model instead of a raw data average. The model takes into account factors including the age of a rating, whether the ratings are from verified purchasers, and factors that establish reviewer trustworthiness.
Top Reviews

Jysen
5.0 out of 5 stars Still one of the best in the series!
Reviewed in the United States on December 24, 2018
Verified Purchase
My 1st encounter of the Harvest Moon series was on the N64, that game alone caused many nights with lack of sleep. Then Back to Nature arrived....

Deeper story with characters, more complex system involving cooking, along with the expected farming, ranching, marriage, and many seasonal events to participate to keep you busy every season. The cooking aspect introduced the need to purchase items such as cooking oil, flour, etc, to hitting the tavern on the right day of the week to order a kitchen utensil from the cooking show you watched on your tv that morning. Out of all the ones I've played to this day, BTN still holds true to me. Also, of all the games in the series, it's the last time you could interact with Elli, and actually Marry, before for reasons unknown, they ignorantly wiped her off the board and made her into a background character in the other games. I will refrain from expressing my opinion on this considering how many back in the day had her as a strong favorite too.

Now, comparing to the N64, Wii, Gamecube, yes, controls were an adjustment to get use to. However it didn't take long to adapt, and it did simplify when it came to planting and watering since it lined you up. While I still prefer the freedom of movement, definitely wasn't a deal breaker, and as I stated, didn't take long to adjust.

Now, as far as the supplier that I bought this from, JRG Utah, holy hell they are Amazing! I ordered this with knowledge I'd get it after Christmas, wake up today, on Christmas Eve and there it was, a brand new, unopened copy. Guess there's a reason why they deserve that 100% positive rating lol.

Martin
4.0 out of 5 stars The cooking mini-game is great, and gives you something extra special to do ...
Reviewed in the United States on April 1, 2018
Verified Purchase
I am really enjoying this game; it has a lot more depth of play than the previous two installments I played as a kid; Harvest Moon for SNES, and Harvest Moon 64 for the N64. There's a lot to do, in fact you're going to have to play the game quite a few times if you want to do it all. There are five girls you can romance and a diverse cast of characters to make friends with. You have a large assortment of crops that are unique to Spring, Summer and Autumn; more than either of the other two i named. The cooking mini-game is great, and gives you something extra special to do with some of those extra crops! There are also fun mini games that take place at different festivals. The harvest sprites play a more active role, basically functioning as a kind of hired help you can assign to various simple tasks around your farm.

Now for the bad; the music is upbeat but can be a little repetitive- the other thing that can be a bit repetitive is some of the townsfolk dialogue. In the previous two versions characters would say different things depending on the weather, upcoming festivals and the season. In this one I think it is entirely dependent on affection, which is a hidden score that tallies how much they like you. If you fail to make friends say, with the grocer, he will always say the same thing depending on where you talk to him. "I'm to my ears in bills!" Also the swimming festival can be quite frustrating; it took me something like 20 tries to get that power berry. The sprites are directly lifted from HM64, but they have been given different roles within the town.

Try it out, if you liked the first two Harvest Moon games you will probably like this one as well. I do!
Read more
Helpful
Comment Report abuse

Mr. James
5.0 out of 5 stars One of the best Harvest Moon Games Period!
Reviewed in the United States on March 24, 2014
Verified Purchase
I'm a huge Harvest Moon Fanatic, HMBTN for the PS is a farming simulation game that came out in the 90's.
If you're familar with the HM series, this game is one of the best in the series. If you've played HM 64 for the old
Nintendo 64, HMBTN, is a carbon copy of that game. I still have my copy of HMBTN for the PS, it's still fun to play.
If you are a Harvest Moon Fanatic like I am, I would buy the HM Boy Girl for the PSP if you have a PSP. In that game,
you can choose to play as a boy or a girl and it's portable too! That game doesn't cost as much as the HM64,
and you can play as a boy or girl like I just stated. Either way, you can't go wrong with either version.
The HM games are so addicting, but in a fun, healthy way. There's no violence, swearing, it's just a wholesome
game that almost everyone can enjoy. I'm 49 yrs young and I love the HM series, played the SNES HM and have it
on the WII VC. One night I dreamt about HM, it's that deep, emotional love I have for the game. There's many HM
games for so many different consoles, you can fill a library with all those games. If I discovered HM today, I would
purchase HMBTN for the PS, it's that good.
Read more
2 people found this helpful
Helpful
Comment Report abuse

Amazon Customer
4.0 out of 5 stars Awesome game!
Reviewed in the United States on March 27, 2019
Verified Purchase
Was supposed to be in “very good” condition, but box was broken and CD scratched: possible that some of the damage occurred during shipment. Regardless, it has worked beautifully for the last few weeks. Love this classic game!!
Read more
Helpful
Comment Report abuse

Alyssa
5.0 out of 5 stars Game in better condition than seller listed - I'm impressed
Reviewed in the United States on May 26, 2020
Verified Purchase
My mom and I have been playing this game off and on since I was young, about 20 years ago if my memory serves me right. I bought a replacement because I broke the last copy we had. Both the disc and the case are in MUCH better condition than the seller listed, as the game came out of the shipping package as if it were new! It also arrived on time and packaged neatly.
Read more
Helpful
Comment Report abuse

Sissy & cody
3.0 out of 5 stars It arrived on time and worked
Reviewed in the United States on August 30, 2019
Verified Purchase
It arrived on time but all I got was a disc no case no instruction booklet I figured for the price i payed for it would come with atleast the case but nope just the disc I wouldn't recommend this for your collection
Read more
Helpful
Comment Report abuse

Joe Boyce
5.0 out of 5 stars A great upgraded port to Harvest Moon 64
Reviewed in the United States on April 16, 2012
Verified Purchase
This game only disappointed me in a couple of minor areas. First, it took me awhile to get used to the movement because your character can only move in four distinct directions as opposed to eight or so in HM64. Second, the music just didn't live up to HM64 in my opinion and I realize that is highly subjective. Everything else this game does better, from the increase in crops to the addition of more tools and the ability to create the food from the recipes that you find. If you are a fan of the Harvest Moon series and especially if you loved HM64, give this title a play-through if you can find it for a decent price.
Read more
Helpful
Comment Report abuse
See all reviews from the United States

Amazon Customer
5.0 out of 5 stars Was in better condition than I thought
Reviewed in Canada on October 28, 2017
Verified Purchase
Above and beyond my expectations. Was in better condition than I thought, practically brand new! Works great, shipped quickly, absolutely love it. Would buy from this seller again, no problem.
Read more
Helpful
Sending feedback...
Thank you for your feedback.
Sorry, we failed to record your vote. Please try again
Report abuse

Page 1 of 1 Start overPage 1 of 1
This shopping feature will continue to load items when the Enter key is pressed. In order to navigate out of this carousel please use your heading shortcut key to navigate to the next or previous heading.
Back
Next
Pages with related products. See and discover other items: harvest moon games, to the moon and back