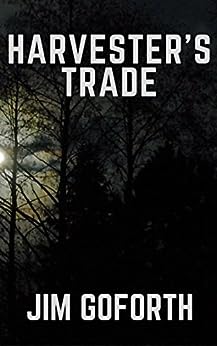 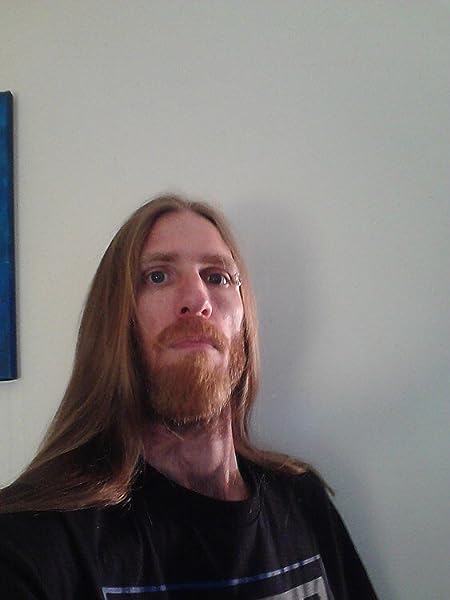 gaz
5.0 out of 5 stars Murderous felons and worse!
Reviewed in the United States on April 8, 2018
Verified Purchase
With extreme horror masterworks like Plebs, Plebs 2, and With Tooth and Claw to his credit, Jim Goforth is a practiced hand at penning intense, gruesome page-turners that pull the reader in and don't let go until the final howl of agony is echoing across the moon-lit hills. The novella Harvester's Trade is a particularly effective addition to his favorite oeuvre.

The ten convicts sitting cuffed and blindfolded in the speeding bus represent the worst of the worst of the prison inmates :incorrigible murderers, rapists, terrorists, gangbangers and drug lords who scoff at all authority and undermine what little morale and sense of order that exists within the prison walls on a daily basis. It is well known that the warden would like to get rid of them all, but what other prison warden in his right mind would accept a transfer of any of these reprobates?

The ten inmates know that something is up, but have no idea where their destination lies until the bus slows to a halt and the warden himself speaks up. He tells them that they are about to be released in a place in which it would be best if they resist their murderous impulses and band together for their common good. There is a safe house out there, and if they can find it they will be secure, and will even be able to walk away free men, without the need to serve any more time behind bars. The prisoners are then led out of the bus, still cuffed and blindfolded. They are halted about fifty feet away from the bus, are made to sit on the ground in a circle, and their blindfolds are removed. They find themselves literally in the middle of nowhere, surrounded by a flat arrid plain with the ground rising toward some wooded hills in the distance. The warden drops a set of keys a little distance away from the circle of prisoners. A grenade is thrown into the bus, blasting the interior and making it undriveable. Then, almost in a panic, the warden and guards flee to several waiting cars and drive away, leaving the inmates to their own devices.

Just as the sun is setting, the prisoners fight for the keys to remove their manacles. There is immediate tension as old animosities immediately come to the forefront. There are various theories as to what is really happening, and whether in fact the promised safe house actually exists. Several teams form, each with different ideas on how to proceed and which direction to go. And always the threat exists that deadly hostilities will break out at any time among lawless men who hold bitter grudges.

As night settles in, it's not long before they find that they are not alone. Horrible screams are heard from the direction of the hills, where one of their number, a mideastern terrorist, had fled away from the group. He was found by the monstrous Harvestors. And the Harvestors won't be satisfied until they catch, and spend quality time, with each inmate in turn.

Who or what are the Harvestors? What are they seeking? Does the promised safe house truly exist? And can the inmates repress their savage hostility toward each other in order to work toward a common cause?

The suspense builds throughout every page until the unexpected and explosive climax.

Don't miss this one! You'll read the whole story in one sitting, guaranteed! Another exercise in gut-wrenching horror by Jim Goforth, one of the modern masters!
Read more
Helpful
Report abuse

Q Parker
5.0 out of 5 stars A powerful foray into self-publishing by a highly skilled writer
Reviewed in the United States on March 1, 2018
Verified Purchase
This story of visceral horror is an excellent debut into the world of self-publishing. Jim Goforth, a highly regarded writer of this genre, certainly doesn't hold back, keeping the adrenaline running from start to finish. It's a quick read--more a sprint than a marathon--but this need to keep things to the point doesn't impact the ambiance at all.

With ten characters getting relatively equal page time, it can be hard to keep track of them, but they're distinct enough, and leave enough of a mark on the story, that this problem goes away within the first few pages. The end has enough twists and drive to leave you wanting more about what's really going on, powered by visuals that could easily be translated to a pretty exciting film.

This'll keep you glued to your Kindle all evening, so be sure to pick up a copy.
Read more
One person found this helpful
Helpful
Report abuse

Veronica L. Smith
5.0 out of 5 stars Horror at its finest!
Reviewed in the United States on February 3, 2018
Verified Purchase
Harvester's Trade was a fast, fun read. The idea was brilliant and while I thought I had guessed it early on, I was happily wrong. A great horror story at its finest.I enjoyed every minute of this!
Read more
4 people found this helpful
Helpful
Report abuse

Travis6711
5.0 out of 5 stars Hell of a ride
Reviewed in the United States on February 3, 2018
Verified Purchase
For his first self published book, Jim doesn't hold back. Bloody, full of monsters like he knows how to create. Hope to see more in the future
Read more
One person found this helpful
Helpful
Report abuse

Randy Smith
3.0 out of 5 stars it was okay read for it's price
Reviewed in the United States on January 21, 2019
Verified Purchase
not the first book I've read from Jim and won't be the last.....short read, gripping and filled with gore and plenty of action to keep you hooked.....ending was okay.....
Read more
Helpful
Report abuse

Mar G.-Amorena
5.0 out of 5 stars Awesome extreme
Reviewed in the United States on February 7, 2018
"Harvester's Trade" is a novella by Jim Goforth. What to say? Goforth is an established extreme horror master and as such, of course, has written an amazing, terrifying, blood-spattered story.
The more you like a book, the more difficult is to review it, because you don't keep calm. You only want to jump and say "ah! read this!!!". I just read it in a row, literally walking around doing things with my phone in my hand, without being able to stop. I finished the book, put it down, stare at it and whisper "Holy cow. This."
Extreme. Blood, entrails, ripped souls. Betray, panic, blindness, survival, terror. A horde of preys stranded to an abomination in the darkness.
Goforth's style is sweet, like a murmur in the back of your mind. Perfectly written. I smiled so big many times with this book. If you're looking for blood, you'll adore this one. I did. I do.
I love extreme and it's difficult to provoke this reaction in me, because nothing usually impresses me, really. Believe me, it did. This-is-good. Awesome. Just, awesome.
Read more
2 people found this helpful
Helpful
Report abuse
See all reviews

Howard carlyle
5.0 out of 5 stars Great story.
Reviewed in the United Kingdom on May 15, 2018
Verified Purchase
I'll be honest and admit that this is the first story of Jim's that I've read... and I wasn't disappointed.
He knows how to create a scene in a story and the characters are well described, most of them deserved what they got (no spoilers).
Can't wait to read his new offering, EXTREMES, which I've already purchased.
Well deserving of the 5 stars.
Read more
Report abuse

Ferret
5.0 out of 5 stars Great read
Reviewed in the United Kingdom on July 30, 2018
Verified Purchase
Great pace, loved the various characters and the way the plot developed. Lots of tension and gory moments. All you need in a good horror read.
Read more
Report abuse
See all reviews
Back to top
Get to Know Us
Make Money with Us
Amazon Payment Products
Let Us Help You
EnglishChoose a language for shopping. United StatesChoose a country/region for shopping.
© 1996-2021, Amazon.com, Inc. or its affiliates