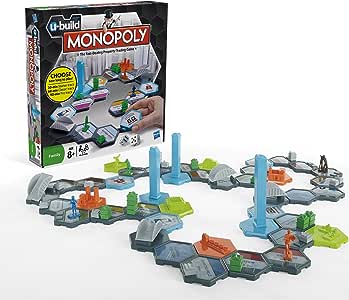 Brand: Monopoly
3.7 out of 5 stars 47 ratings
Available from these sellers.

Time to jet
Toys for your little ones Shop now

The classic buying, selling, building games is completely under your control! Choose how long you want to play and then build the track to match. For shorter games, set up the Starter track and for longer-lasting fun, choose the classic track. Or get creative! Change the order of your tiles and the shape of your track to create a totally unique freestyle game adventure. The awesome, high-stakes real estate action fun is the same, but the tracks you play it on can always be different.

3.7 out of 5 stars
3.7 out of 5
47 global ratings
How are ratings calculated?
To calculate the overall star rating and percentage breakdown by star, we don’t use a simple average. Instead, our system considers things like how recent a review is and if the reviewer bought the item on Amazon. It also analyzes reviews to verify trustworthiness.
Top reviews

“Monopoly” has a reputation of being pretty long-winded in that games never seem to end. Not the case with “U-Build Monopoly”, I’m happy to report. The starter track, while ignoring some of the rules/components listed above, can be played in about a half-hour. The industrial buildings and Monopoly tower, for example, are only used in the classic and pro tracks. By that same token, players are free to customize the board’s layout and include whatever buildings they want so as long as they understand that the game might be slightly unbalanced should they deviate too far from the norm.

The components themselves aren’t all that great as far as quality is concerned and the instruction manual is a bit “off” in a few places. For example, page 17 doesn’t list the stadium as a building you’ll need for the classic track, yet page 9 states that the stadium is used in classic and pro tracks. The rules can be a bit overwhelming to first time players, so I recommend starting with the starter track AND not worrying so much about getting the rules right. It’s not the end of the world if you miss something…after all, games exist to provide a form of entertainment. What’s important is that you and your group have fun…if that means house-ruling something that isn’t clear or doesn’t make sense, so be it. Be creative!

Overall, “U-Build Monopoly” is a fairly good value for its $5-10 price tag. The ability to customize your own tracks certainly adds to the replayability factor…the more you’re willing to think outside the box, the more you’ll get out of this product. I wouldn’t have minded paying a few extra bucks so that the components could be of better quality, but they succeed at what they are designed to do. While there are plenty “Monopoly” variants of better quality out on the market, this one will provide you and your family/friends with something slightly different to play…great for when you’re tired of playing the same old rules over and over again. For example, I like the fact that the game minimizes the luck factor a bit in that hazards (and bonus buildings) can be used strategically. That’s something you can’t do in plain old “Monopoly”. What’s better, the game (compared to standard “Monopoly”) actually ends at some point!

In the end, “Monopoly U-Build” is filled with some great ideas, but falls short in the implementation due to subpar component quality. Even some of the bags that initially hold the components are not resealable, which is a poor design choice considering that the box barely has an insert. Make sure to have extra baggies handy for the smaller pieces. Then again, the game is only $5-10…had it been any higher, the review score would have plummeted accordingly.

Jen
4.0 out of 5 stars Quick set up, but very different than the traditional game
Reviewed in the United States on October 12, 2015
Verified Purchase
My 7 year old son has enjoyed playing this. I think it is a bit of a stretch to call it Monopoly as it is pretty different from the original version. Overall it was an easy game to learn and doesn't take too long to set up at all.
Read more
2 people found this helpful
Helpful
Comment Report abuse

steven burton
2.0 out of 5 stars Poor condition
Reviewed in the United States on March 6, 2019
Verified Purchase
Product was wrongly listed as "new" should have been listed as used "very good" not what I paid for. Can not shelf it with my collection due to damage to the box. At least seems to contain all pieces.
Read more
Helpful
Comment Report abuse

Ellimist
5.0 out of 5 stars Neat
Reviewed in the United States on November 9, 2014
Verified Purchase
Fine game. Extra rules/gameplay don't interest me much, but you can still play classic style. I got this for portability, as the box is roughly half the size of the original game.
Read more
One person found this helpful
Helpful
Comment Report abuse

rose
4.0 out of 5 stars Teens liked it!
Reviewed in the United States on August 25, 2016
Verified Purchase
My son and his friends liked it!
Read more
One person found this helpful
Helpful
Comment Report abuse

Dancin' Don
5.0 out of 5 stars Has all the pieces
Reviewed in the United States on September 3, 2017
Verified Purchase
Its fine except wife wanted the traditional one...
Read more
Helpful
Comment Report abuse

Amanda
5.0 out of 5 stars Wow
Reviewed in the United States on March 5, 2014
Verified Purchase
I never knew monopoly could be so confusing! My son loves it, but following the rules with all of the add on's is quite a challenge. Great for families that love to have game night, and patience, but for my family it wasn't a very good fit.
Read more
One person found this helpful
Helpful
Comment Report abuse

julie
4.0 out of 5 stars how can you go wrong it is monopoly
Reviewed in the United States on January 2, 2011
Verified Purchase
this monopoloy is a bit different than the original, the kids love this game, there are different levels and different ways you can build the track depending on your game level and how long you want to play which is nice
Read more
4 people found this helpful
Helpful
Comment Report abuse
See all reviews

Page 1 of 1 Start overPage 1 of 1
This shopping feature will continue to load items when the Enter key is pressed. In order to navigate out of this carousel please use your heading shortcut key to navigate to the next or previous heading.
Back
Next
Pages with related products. See and discover other items: all the monopoly, monopoly versions, rock samples, the monopoly, monopoly gifts, railroad board game