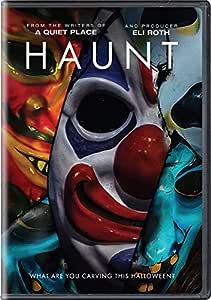 On Halloween, a group of friends encounter an "extreme" haunted house that promises to feed on their darkest fears. The night turns deadly as they come to the horrifying realization that some nightmares are real.

4.1 out of 5 stars
4.1 out of 5
1,975 global ratings
How are ratings calculated?
To calculate the overall star rating and percentage breakdown by star, we don’t use a simple average. Instead, our system considers things like how recent a review is and if the reviewer bought the item on Amazon. It also analyzes reviews to verify trustworthiness.

Cold 'n Happy in WI
4.0 out of 5 stars Good and Scary Halloween Film
Reviewed in the United States on September 19, 2019
Verified Purchase
Now THAT was scary! I would have liked a little less gore and more Hitchcock-like effects ( you know when the film maker lets your imagination run wild with what you THINK you saw instead of showing us everything); but it was very well done. A solid Halloween flick. Loved how it was set in a town in Illinois too, felt like a nod to Halloween 1978.
Read more
33 people found this helpful
Helpful
Comment Report abuse

D. Rader
5.0 out of 5 stars Disturbing
Reviewed in the United States on September 27, 2019
Verified Purchase
Glad I stumbled upon this movie. I'm a fan of Halloween Haunts and they can really get to me. This movie portrays what is supposed to be an extreme haunt but it's really just a torture house. I found myself on the edge of my seat in some parts of the movie and I was really rooting for these characters to get out of the house too. And again, it's a horror movie with a satisfying ending! I'll always like that.

As I thought about my rating, I couldn't think of one reason not to give the movie 5 stars. It deserves them!

Blue Canaery
2.0 out of 5 stars No way..no no no..no
Reviewed in the United States on October 5, 2019
Verified Purchase
Warning: This review has a few minor spoilers and a lot of sass.

Basics: Harper is a 20 something year old female with a bad family history and an abusive boyfriend. She breaks up with him. Then, her friends decide she needs a night out on Halloween. She goes out with them. They end up going to a haunted house that is a place where some strange people like to murder folks. Honestly, Harper going with this group of people was just bad luck for them. It proves that a couple of them might've survived if she hadn't been there at all.

In general, I've seen better horror flicks. It has an interesting premise (a haunt where people are murdered), but it starts out SLOOOOW. By the time the action is picking up, you're probably already through a bag of popcorn and wondering if there's any reason to keep watching it. The villains might've been interesting, but since we never knew much of anything about them, it just felt like an opportunity was lost. I cared very little about the backgrounds to most of the protagonist characters. A couple of them are straight out unlikable ("No, I absolutely do not care about your cousins or what they do for a living."). Sure, that doesn't mean these characters deserve what happens, but it definitely doesn't make you care as much as if they'd been characters you could like. Sam seemed like an afterthought, too.

Plus, there's the egregious problem with most horror movie protags in that they leave weapons behind or simply never pick them up. Let's count them, okay? Knives, rifle, handgun, sledgehammer, board with nails, maglite flashlight, keys on a chain, pitchfork, heavy iron poker, baseball bat... Sure, they use a couple of the weapons, but they also leave them behind. It's like, "Nope, I can only use that weapon once. I must set it free now."

And movie script writers, PLEASE don't use names like "Harper," "Bailey," etc. It tends to make the characters harder to identify with. Go with fairly common names. There will be way more Karens, Amandas, Amys and Michelles watching this movie than anyone named Harper or Bailey. It is more psychologically devastating to see someone killed who has a name you recognize as someone's name you like in real life. Harper...does she have a sister named Piper and a brother named Drummer? Let's stop this trend, please. If you hate your own characters, sure, name them something like this. Otherwise, if you want your audience to identify with your characters, please consider sticking with names that are more common than turning around randomly and pointing at something and deciding to name your character that. Next thing you know, we'll see characters named "Phone," or "Microwave," or "Doodad".

And seriously, there were some really bad editing goofs; broke my immersion in a few places. A big nail through your foot does not suddenly become unimportant when the scene changes. And where..oh where...did the villains find that amazing, miraculous fast-drying glue? Holy heck! I could really use some of that! Amazon, get on that!

Mike Grow
1.0 out of 5 stars Garbage
Reviewed in the United States on September 21, 2019
Verified Purchase
I rented this based on a ton of positive feedback in the review section on Amazon and ITunes. They must’ve watched a different movie because this was crap. Don’t waste your money.
Read more
19 people found this helpful
Helpful
Comment Report abuse

h hansen
1.0 out of 5 stars The 80s called ;they want their "B" rated horror movie back.
Reviewed in the United States on October 22, 2019
Verified Purchase
The movie is very predictable. Starts out slow. A group of young adults go out for Halloween and find an out of the way Haunt. They decide to visit. The group has the typical emotional girl that has parent issues, an alpha male jerk and a good guy with a couple of other females. The Haunt is run by clowns who collect their cell phones before entering. From there they are led through building maze running into various horror displays. They start getting hurt and trapped when they determine that it is real.
There are too many scenes of them lost in the maze and losing keys. They run into a clown where instead of grabbing him and tying him up and taking him prisoner to get out, no they decide to treat him like a friend. It doesn't end well. One by one they get killed.
The real spoiler alert: the emotional depressed girl turns into the hero survivor by turning into a rambo chick and takes out most of the clowns. Overall too repetitious, no background on who or why the evil clowns are doing this. It's basically an 80s B rated horror movie.
Read more
14 people found this helpful
Helpful
Comment Report abuse

leo
5.0 out of 5 stars Enjoyed it from beginning to end
Reviewed in the United States on September 24, 2019
Verified Purchase
It was scary, creepy and fun. You cared about the main character and she had an interesting back story that kept you rooting for her. Yes, it is formulaic for the most part, but it is creative and creepy with a perfect ending. Most scary movies screw up on the ending, but this gets it right.
Read more
12 people found this helpful
Helpful
Comment Report abuse

Amazon Customer
5.0 out of 5 stars 5 stars as far as scary/teen/slashers go
Reviewed in the United States on September 26, 2019
Verified Purchase
i liked the characters and their chemistry...it didnt come across super fake like most teen horror movies. and there is a little twist at the end that i enjoyed. there was gore, but i didnt think it was anything crazy compared to other movies or even tv series (Slasher is a super gorey series that i liked for some reference). other than that if you are a fan of horror then i say this is a pretty good pick!
Read more
12 people found this helpful
Helpful
Comment Report abuse

Jennifred71
3.0 out of 5 stars Fine, for what it is . . .
Reviewed in the United States on October 3, 2019
Verified Purchase
I went into this one knowing it was just a fun little slasher film, so I wasn't expecting anything terribly clever or deep. The premise is interesting, and the characters are fine. But, to be honest, I really found myself getting bored about two thirds of the way through the movie.
There wasn't anything particularly compelling about the the development of the plot or the characters. I feel it would have been relatively easy to give the villains some background, which would have added just a touch of depth and kept the audience more engaged.
Regardless, if you're looking for something with which to pass the time, and if you like the slasher genre, you'll most likely enjoy this flick.
Read more
2 people found this helpful
Helpful
Comment Report abuse
See all reviews

The Late Review
5.0 out of 5 stars What a great Slasher movie
Reviewed in the United Kingdom on September 28, 2020
Verified Purchase
Possibly one of the best Slasher movies of recent times, set around Halloween at a theme park, plenty of tension plenty of kills plenty of blood
Read more
Report abuse
See all reviews

Page 1 of 1 Start overPage 1 of 1
Previous page
Next page
Pages with related products. See and discover other items: Explore films for Polaroids, Explore film for polaroids