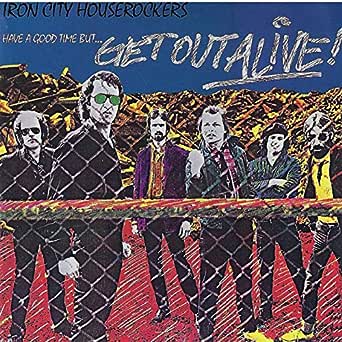 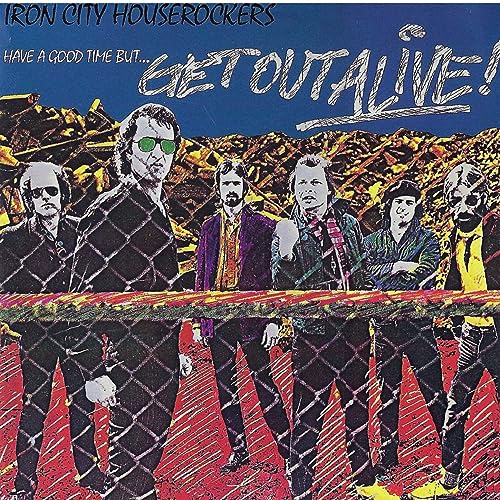 Have a Good Time but... Get out Alive [Clean]

Listen Now
Buy MP3 Album $27.72
Your Amazon Music account is currently associated with a different marketplace. To enjoy Prime Music, go to Your Music Library and transfer your account to Amazon.com (US).

John McKeon
5.0 out of 5 stars Pumping Iron and Sweating Steel
Reviewed in the United States on March 27, 2018
Verified Purchase
this was one of the best albums of the 80's and has now been reissued in CD. This is a great collection from a very underrated band and this music stands the test of time. Great vocals and lyrics from Joe Gruschecky on 12 strong songs. The title track is terrific , dont let them push you around, and we 're not dead yet are my favorites . There is not a weak cut here, this band has been called the greatest bar band and this may be true but they should not only be heard in a bar. Play this when you are home, in the car and out in the street, have a good time but get out alive. Recommended.
Read more
3 people found this helpful
Helpful
Report abuse

Amazon Customer
5.0 out of 5 stars If you like Bruce....well give this a listen
Reviewed in the United States on July 4, 2020
Verified Purchase
Classic album.....I'm more into metal ,but i can dig sprngsteen and the Houserockers come from that mold.
Read more
One person found this helpful
Helpful
Report abuse

ScottE
5.0 out of 5 stars A true masterpiece
Reviewed in the United States on September 10, 2010
The Pittsburgh based band "Iron City Houserockers" put out quite an album in 1980. Produced by The Slimmer Twins and the late great Mick Ronson. Joe Grushecky and company put out their most solid release right here. "Have A Good Time (But Get Out Alive)", should of propeled them to super stardom, but as with most good rock bands they were left behind as such bands as Lipps Inc. and etc. gained the headlines in 1980. The title track is pure ICH, what a fun track. Other songs that give this album it's appeal are: "Don't Let Them Push You Around", "Pumping Iron", "Hypnotized" with guest Ian Hunter, "Angela", "We're Not Dead Yet", their salute to Debbie Harry in "Blondie", one of my favorite songs on here are the old time vocals by Gil Snyder on "Old Man Bar" that goes straight into the rockin' "Junior's Bar", I think this song should of been a big hit, rock radio was fairly good back in the day, but sure missed a lot of great songs! This album featured Steve Van Zandt of the E-Street Band as arranger of 5 of the songs metioned above. The band released a few more albums before being dropped from their label. Overall this is a true masterpiece of ROCK AND ROLL!
Read more
3 people found this helpful
Helpful
Report abuse

Barry Rucker
3.0 out of 5 stars Worth a listen
Reviewed in the United States on May 6, 2018
For me, two songs on this album stand out: "Don't Let Them Push You Around" is a defiant punk-influenced rock song with a strong message and loads of energy; "Old Man Bar" is an affecting ballad that is a change of pace compared to the rest of the album.
Read more
Helpful
Report abuse

D. A. Dudus
5.0 out of 5 stars The Classic is Re-released !
Reviewed in the United States on September 27, 2009
I picked this album up when it was first released. Couldn't find it in CD form and it broke my heart to find out it was discontinued. BUT IT'S BEEN RE-RELEASED ! You can get it at band leader's Joe Grushecky's website [...] for about 15 bucks. Sounds every bit as fresh now as it did back in the day when I wore by record player's needle out on it.
Read more
2 people found this helpful
Helpful
Report abuse

M. Vanfossan
5.0 out of 5 stars Iron Tough Album
Reviewed in the United States on September 14, 2014
Great album by the Iron City Houserockers. Highly recommend! Don't hesitate to buy it. You won't regret it.
Read more
One person found this helpful
Helpful
Report abuse