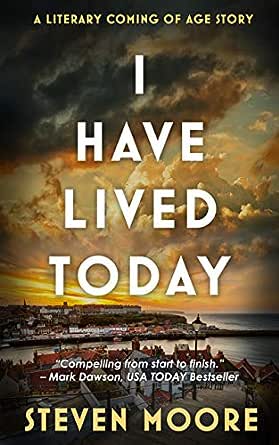 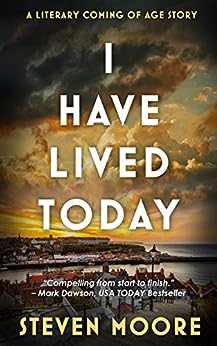 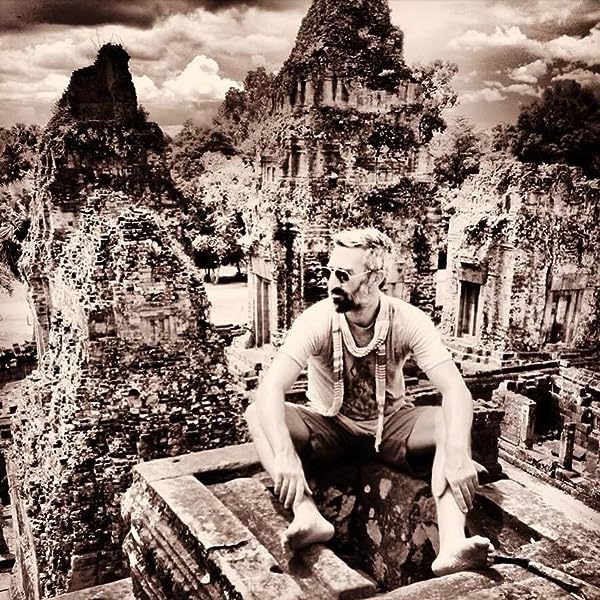 I Have Lived Today: A Literary Coming of Age Story Kindle Edition

Steven Moore grew up (apparently) by a beach in England. An avid (average) sportsman, painter, photographer and reader, those loves were only trumped by his love of travel and writing. To date he has visited 53 countries, and has lived and worked on five continents. Highlights include trekking in the Andes and Himalayas, scuba diving all over the world, teaching English in Korea, and eating anything and everything, wherever he happens to be. Oh yes, and sampling local beers, obviously. Steven now lives in San Miguel de Allende, Mexico with his wife, freelance journalist Leslie Patrick Moore, and though they've at last found a beautiful home base, the next adventure is always just around the corner. Tribute for 'I Have Lived Today' "Moore has a crisp, economical style, and sets the scene well. The story, while bleak, is shot through with moments of pathos...compelling from start to finish" - Mark Dawson, bestselling author of the John Milton, Beatrix Rose, Isabella Rose and Soho Noir series. Steven has recently published the first instalment of his action thriller series, 'The Samurai Code', and the follow-up, 'The Condor Prophecy', is coming very soon. Early tributes for 'The Samurai Code': “Starts fast and doesn't let up.” “An unremitting whirl throughout.” “Thrilling from start to finish.” “Great action, history & a dash of mystery.” “Fast-paced and brilliantly written adventure thriller.” To follow Steven's writing career and learn about new releases, go to his imaginatively named author website, 'Steven Moore, Author.' --This text refers to the paperback edition.

4.5 out of 5 stars
4.5 out of 5
140 global ratings
How are ratings calculated?
To calculate the overall star rating and percentage breakdown by star, we don’t use a simple average. Instead, our system considers things like how recent a review is and if the reviewer bought the item on Amazon. It also analyzes reviews to verify trustworthiness.
Top reviews

David C Taylor
5.0 out of 5 stars Get ready for an emotional roller coaster ride!
Reviewed in the United States on February 22, 2020
Verified Purchase
I Have Lived Today- what a powerful statement not to mention I have now experienced a book that made this quote by Franz Kafka real for me. “I think we ought to read only the kind of books that wound or stab us. If the book we're reading doesn't wake us up with a blow to the head, what are we reading for? So that it will make us happy, as you write? Good Lord, we would be happy precisely if we had no books, and the kind of books that make us happy are the kind we could write ourselves if we had to. But we need books that affect us like a disaster, that grieve us deeply, like the death of someone we loved more than ourselves, like being banished into forests far from everyone, like a suicide. A book must be the axe for the frozen sea within us. That is my belief.”

Having just finished listening to this story my emotions are raw from all the tugging and pulling. Thanks for the opportunity to experience Steven’s best story. I like The Kane stories, but this is light years beyond most of what I typically read/listen to.
Steve Aleppo’s narration makes this story and it’s characters come alive.

Peter H. Burris
2.0 out of 5 stars very glad the author wrote this
Reviewed in the United States on January 4, 2021
Verified Purchase
Having read and enjoyed many Hiram Kane adventures, I am so glad that Moore wrote this before the adventure stuff. I feel that he wrote his heart out on this "literary adventure," and the fact he went all out, means he got it out of his system and was able to learn to rein in his excessive impulses.in short, his prose improved dramatically after he wrote his ode to Horace, where the title originates. To be clear, the story is fascinating, and the characters are compelling, but the prose makes my pancreas ache. The writing is cringe-worthy and sentimentally overwrought in tone,

Do read the author's adventure books! they're good, and they're fun!
Read more
Helpful
Report abuse

Ron
5.0 out of 5 stars Lived
Reviewed in the United States on August 18, 2019
Verified Purchase
Seemed there was a lot of jumping scenes however the author tied them up and so there was a flow which was great.

Brian H.
5.0 out of 5 stars Just WOW!!
Reviewed in the United States on October 19, 2019
Verified Purchase
Heartbreaking, heart wrenching, one that will stay with me for a very long time. The power of love and forgiveness is shown where you least expect it!!! Brilliantly written!!
Read more
2 people found this helpful
Helpful
Report abuse

D LALLY
5.0 out of 5 stars grudgingly because it didn't sound like the sort of book that I like (depressing back ...
Reviewed in the United States on January 22, 2016
Verified Purchase
I somewhat grudgingly started this book upon a recommendation from a friend; grudgingly because it didn't sound like the sort of book that I like (depressing back story, journey of self-discovery - when I tend to read fantasy and non-fiction) but I hate it when people say that to me when I recommend them fantastic books and they're not willing to give them a try, so I gave it a go. To say I was pleasantly surprised would be somewhat of an understatement, it's a great book, well-written and grabs you from the start. Somehow, despite the aforementioned depressing content of the book, it is not at all a depressing read. I wasn't born in the era the book was set, which didn't detract anything from the experience for me but may add something for readers who can connect to some of the historical allusions (mods and rockers, the Krays..). While it may not be my cup of tea, I thoroughly enjoyed it and would give it 4 stars - I got a copy for my nan because I thought she would like it and she absolutely loved it, 5 stars from her!
Read more
4 people found this helpful
Helpful
Report abuse

Joe H.
5.0 out of 5 stars A mystery well written!
Reviewed in the United States on June 3, 2018
Verified Purchase
I chose a 5 rating because it was a book I didn't want toput down. The different directions that led to varios parts of the book wer exciting and led to unexpected results in the main characters life. The ending was great and unexpected by me.
Read more
2 people found this helpful
Helpful
Report abuse

Bicycle John
5.0 out of 5 stars From the darkness comes light!
Reviewed in the United States on October 22, 2017
Verified Purchase
I loved this story. It started out a little slow and I was not sure where it was going, but all of a sudden BAM! Author Steven Moore’s first novel shows his distinctive attention to detail and impressive character and location development. Although the story is certainly dark, and sometimes a bit depressing, there is an ultimate sense of if not joy, then at least of metaphysical and spiritual awakening. Once I got into it there was no getting out! I feel like there are at least a couple of more stories in here, and I hope that we will hear from not only Tristan, but the likes of Tramp and Peter again soon.
Read more
2 people found this helpful
Helpful
Report abuse

Mike in MD
5.0 out of 5 stars A True Adventure
Reviewed in the United States on September 25, 2016
Verified Purchase
I was concerned about the book being described as dark, but found it a smooth and exciting read. I liked the author's writing style and regarded it like a modern day Dickens. While the main character lives through a variety of dark and challenging circumstances, he develops positive relationships with others that carry him through the ups, downs, twists, and turns of his rough young life. Although the book's time period is in the 1960's, it feels more like a tale from the 1760's or 1860's. I look forward to more from this author.
Read more
2 people found this helpful
Helpful
Report abuse
See all reviews

Allison Valentine
4.0 out of 5 stars Harrowing and beautiful
Reviewed in the United Kingdom on January 15, 2020
Verified Purchase
An amazing story that breaks your heart,the emotions and feel for the characters within the book just melts your heart.
Young Tristan had a extremely hard and brutal being, but he stood strong and has beaten all the odds.
A fantastic novel that pulls every heartstring.
Read more
One person found this helpful
Report abuse

ActionLover
5.0 out of 5 stars Fantastic story
Reviewed in the United Kingdom on April 10, 2020
Verified Purchase
Fantastic story. For the 300 pages I was there with Tristran. Beautiful book.
Read more
2 people found this helpful
Report abuse

john onians
5.0 out of 5 stars Out of Darkness
Reviewed in the United Kingdom on February 20, 2015
Verified Purchase
If you haven’t grown up this book will help you to. Tristan will take you back to a childhood darker than anything you have imagined, a world where violence is like the weather, all encompassing, but, because it is like the weather, able to pass and lift like clouds to give glimpses of light, something to look for and follow. This light takes many forms, at first an object, a letter, a ferry, a road, a car, then increasingly a human being. As Tristan travels from his remote island to the metropolis, he gathers people from cafes and shops, buses and underpasses. All are transformed by their contact with him, becoming his and everyone’s friends. They also become friends to the reader, who starts out as cold and lonely as the hero and ends excited and engaged on a London stage filled with a cast drawn from every class and race, where anything can happen. After astonishing last scenes in which violence alternates with gentle warmth the reader has grown up. As you put the book down, you will feel stronger, wiser, and more human.
Read more
2 people found this helpful
Report abuse

S. Stewart
5.0 out of 5 stars A story of deep hurt and shocks
Reviewed in the United Kingdom on February 13, 2015
Verified Purchase
Excellent read and one of those stories that are timeless.. stong settings, deep characters, and a story that we can all relate to. A book to make us search our own souls.. a few shocks and twists along the way that keep the story compelling and the descriptive writing really sets the scenes, the time and the characters... great read
Read more
One person found this helpful
Report abuse