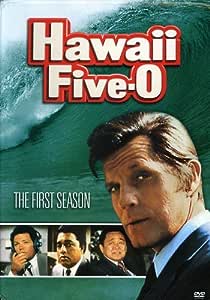 There's plenty to like about Hawaii Five-0, the late '60s cop show debuting on DVD by way of this seven-disc set including all episodes from the first season, along with the two-hour pilot that preceded it. Like the music, featuring Morton Stevens' popular theme song. Or the lovely Hawaiian scenery. And let's not forget "Book 'em, Danno," the signature line delivered (although not nearly as frequently as one might expect) by star Jack Lord's Steve McGarrett, not to mention Lord's perfect hair and wrinkle-free slacks. As for everything else, let's just say that Hawaii Five-0 has not aged well. Some of that is inevitably due to the infinitely more sophisticated production values of the series that have followed in its wake; Five-0's technology, sets, and other practical elements are laughably primitive by current standards. Problem is, the cheese factor extends to pretty much every other aspect of the show as well. Most of the action sequences are utterly tension-free, and the pace is frequently glacial, with interminable scenes bogged down by talky exposition. The dialogue is risible: McGarrett refers to one adversary as "a dirty, double-dealing fink," while the so-called hippies who populate the islands utter the kind of idiocies that could only have been written by cubes whose closest contact with the counterculture came from TV commercials for Hai Karate men's cologne ("Looks like splittin' the scene was real cool, baby" is but one egregious example). Lord does a decent job as the stiff-but-heroic McGarrett, variously described as "a hardhead," "an organizational misfit," "a brilliant operator," and "a rebel," but by and large the acting (including guest shots by Sal Mineo, Ricardo Montalban, Gavin MacLeod, and Yaphet Kotto) is wooden. Story-wise, "Cocoon," the pilot, features an intriguing premise wherein U.S. intelligence agents undergo sensory-deprivation torture before spilling their secrets; elsewhere, the elite Five-0 team deals with jewel thieves, gold smugglers, kidnappers, gamblers, murderers, mobsters, all-purpose "criminal masterminds," and even "Red agents" spreading the bubonic plague. In sum: with its light (if not quite frothy) tone, Hawaii Five-0 will offer harmless escapism to some viewers, especially those with a nostalgic bent. Others, however, will long for more substantial fare--you know, like Deal or No Deal. The DVD set includes a single bonus feature: "Emme's Island Moments: Memories of Hawaii Five-O," a retrospective with James "Danno" MacArthur and other cast and crew members. --Sam Graham

Page 1 of 1 Start overPage 1 of 1
This shopping feature will continue to load items when the Enter key is pressed. In order to navigate out of this carousel please use your heading shortcut key to navigate to the next or previous heading.
Back
Next
Pages with related products. See and discover other items: jack lord, multiple movies on one dvd, old movies classics, painted hills