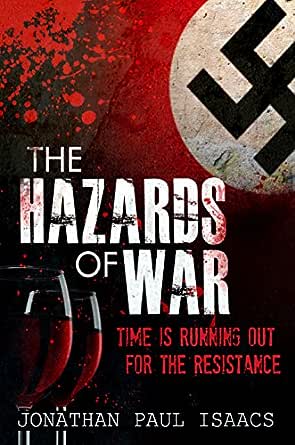 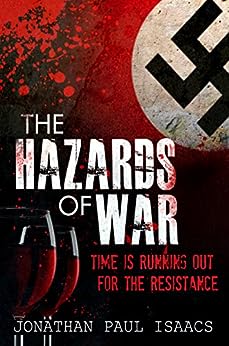 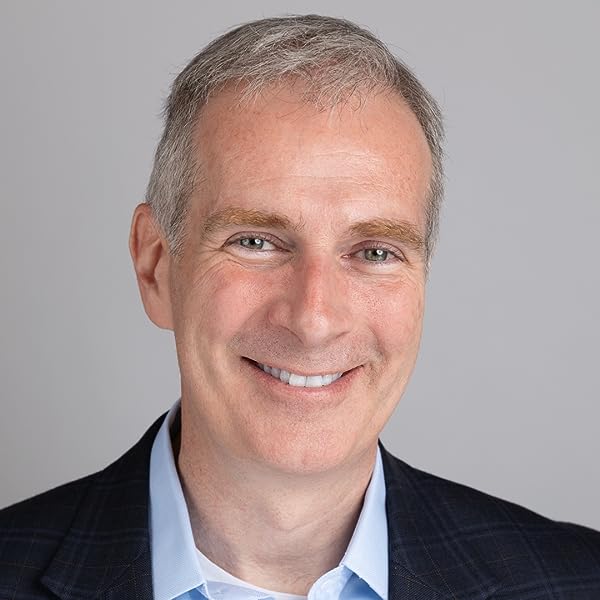 The Hazards of War Kindle Edition

VISIT MY WEBSITE AT JPISAACSAUTHOR.COM FOR A FREE E-BOOK!
"The complex plot unfolds in clean and excellent prose through the voices of strong and well-developed characters, each with a personality faithful to his or her background. It is a story that builds to several false climaxes, hesitates, then peels another layer from the onion and lets the tension mount. It is a great tale with a pace that never falters."  -Reader's Favorite
"An exciting war novel blended with elements of detective fiction."  -Manhattan Book Review

4.1 out of 5 stars
4.1 out of 5
91 global ratings
How are ratings calculated?
To calculate the overall star rating and percentage breakdown by star, we don’t use a simple average. Instead, our system considers things like how recent a review is and if the reviewer bought the item on Amazon. It also analyzes reviews to verify trustworthiness.
Top reviews

Celia
5.0 out of 5 stars An SS officer investigating the murder of one of his men in occupied France...What an unusual plot!
Reviewed in the United States on November 30, 2016
Verified Purchase
Excellent and very unusual book about the Second World War in France. The plot cannot be easily categorized. It is a historical novel, focusing on the wine industry in France during the occupation of the country by the Germans. But it is also a thriller, featuring a very unusual investigator, an SS officer trying to figure out who killed one of his officers. This is also a psychological drama because the family whose home is occupied by the SS unit is playing a life and death game of chess with their tormentors. The suspects in the murder include the members of the wealthy wine making family, the British pilot who is hiding in their house, and, of course, the members of the SS unit. The atmosphere of this book is dark and claustrophobic, the research on which the book is based is meticulous, and the psychological insights, including some amazing facts about people's non-verbal behavior under pressure, are impressive. I couldn't let go of this book and read it almost in one sitting. I agree that the ending is disappointing, but, then, it opens the door to a sequel, that I am sure will follow. Highly recommended!
Read more
6 people found this helpful
Helpful
Comment Report abuse

PCDP2012
5.0 out of 5 stars Well-written, fast paced thriller set in WWII France
Reviewed in the United States on September 10, 2018
Verified Purchase
I enjoyed the pacing and development of the different characters in this story. The motivations of the SS Captain, the murderer, and the grandfather and father were revealed gradually but not in a drawn out way. I finished this book quite quickly and I enjoyed the journey the author took me on--and I found the ending quite satisfactory.

An engrossing read for those who enjoy mystery novels and/or WWII fiction.
Read more
One person found this helpful
Helpful
Comment Report abuse

tste
4.0 out of 5 stars Great Story
Reviewed in the United States on April 26, 2017
Verified Purchase
I loved the story, a Nazi SS patrol caught in a storm - a murder mystery - excellent writing; the only thing I could have done without was the graphic description of the torture on the British airman's leg.
Read more
3 people found this helpful
Helpful
Comment Report abuse

Kindle Customer
5.0 out of 5 stars A good book to get.
Reviewed in the United States on July 19, 2020
Verified Purchase
The keeps you wondering how they will get out alive which comes a challenge, the Germans just had bad timing for the French. The story shows how they try to survive and keep the American in one piece. Well done with the book , you kept me wanting more.
Read more
Helpful
Comment Report abuse

Retired Bear
4.0 out of 5 stars Not a blood and guts war story - 4.5 stars
Reviewed in the United States on July 3, 2018
Verified Purchase
The book is a window into the nationalistic differences of people thrust together in times of war. This story shows a psychological study of a SS officer as he tries to discover who killed one of his men. I found the story enlightening and well written. The author has crafted a thoughtful story that may well surprise you. I highly recommend this author and this book.
Read more
Helpful
Comment Report abuse

ntpilot
4.0 out of 5 stars The WIne Cellar Mystery
Reviewed in the United States on September 8, 2015
Verified Purchase
Enjoyed the book. Good story about one family's face to face confrontation with the brutality of war. The sacrifice made by one of the characters and the realization by another of its meaning was not only a demonstration of love and courage but a wakeup call to action, The head German officer was shown to be a conscientious leader of his men, As a soldier, not a ruthless killer, he tried to do what was best given the circumstances. A downed flyer, family dissension, brutality, revenge, murder and the resistance all play a role in this well written novel. I would recommend it to anyone who enjoys WW11 novels.
Read more
11 people found this helpful
Helpful
Comment Report abuse

zimmspad
5.0 out of 5 stars Great WW2 story
Reviewed in the United States on August 19, 2020
Verified Purchase
An exciting war story,.Exciting from start to the end. Takes place at a winery in Italy as Germans invaded. The characters were well developed. O think anybody will enjoy this novel.
Read more
Helpful
Comment Report abuse
See all reviews

Avid Reader
4.0 out of 5 stars An unusual whodunit
Reviewed in the United Kingdom on September 5, 2017
Verified Purchase
This is an unusual whodunit, set in a French vineyard during WW2. Full marks for originality. However, the book would have benefited from the services of a professional editor rather than relying on beta readers alone. Like many self-published novels, the number of typos increases with the page count, with malapropisms like a parachutist ‘hurdling’ to the ground, and someone driving a cart by grabbing the ‘reigns’. I found it difficult to envisage the layout of the location, but I nearly always have that problem, and it’s something I struggle with in my own books. The character building and development were excellent, the storyline well worked out, plausible, and not too predictable. The story ended rather abruptly, with various key plot points unresolved. Perhaps the author intends to write a sequel. 4 stars. JJ Toner
Read more
One person found this helpful
Report abuse

C
4.0 out of 5 stars Interesting
Reviewed in the United Kingdom on July 19, 2019
Verified Purchase
A good read interesting story but would have liked to know how all the characters raided at the end not just some
Read more
Report abuse