Head Off & Split: Poems and millions of other books are available for Amazon Kindle. Learn more
Kindle
$15.51 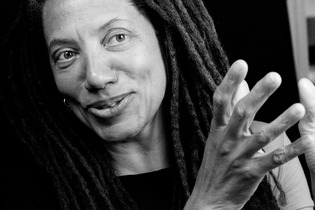 "Nikky Finney has been a fine poet much too long to say that this latest treasure is her promise coming into being. She exploded with so much talent with On Wings Made of Gauze and beautifully matured with Rice, yet Head Off & Split takes the promise of youth with the control of adulthood to bring her greatest exploration. Honest, searing, searching. We all, especially now, need this book of poems; we all, especially now, need this poet." -Nikki Giovanni, author of Bicycles

"Beginning with the sweepingly inclusive and powerful 'Red Velvet,' a Middle Passage poem for our times, Nikky Finney takes the reader to a wonderfully alive world where the musical possibilities of language overflow with surprise and innovation. Finney has an ear to go along with the wild-ness of her imagination, which sweeps through history like a pair of wings. Her carefully modulated free verse is always purposeful in its desire to move the reader in a way that allows us intimate access to necessary observations about ourselves. These poems, in other words, have the power to save us."
--Bruce Weigl, author of What Saves Us

"With Head Off & Split, Nikky Finney establishes herself as one of the most eloquent, urgent, fearless and necessary poets writing in America today. What makes this book as important as anything published in the last decade is the irresistible music, the formal dexterity and the imaginative leaps she makes with metaphor and language in these simply stunning poems. This is a very, very important achievement."
--Kwame Dawes, author of Hope's Hospice

Nikky Finney was born at the rim of the Atlantic Ocean, in South Carolina, in 1957. The daughter of activists and educators, she began writing in the midst of the Civil Rights and Black Arts Movements. With these instrumental eras circling her, Finney's work provides first-person literary accounts to some of the most important events in American history.

In 1985, and at the age of 26, Finney's debut collection of poetry, On Wings Made of Gauze, was published by William Morrow (a division of HaperCollins). Finney's next full-length collection of poetry and portraits, RICE (Sister Vision Press, 1995), was awarded the PEN America-Open Book Award, which was followed by a collection of short stories entitled Heartwood (University Press of Kentucky, 1998). Her next full-length poetry collection, The World Is Round (Inner Light Books, 2003) was awarded the Benjamin Franklin Award sponsored by the Independent Booksellers Association. In 2007, Finney edited the anthology, The Ringing Ear: Black Poets Lean South (University of Georgia Press/Cave Canem), which has become an essential compilation of contemporary African American writers. Her fourth full-length collection of poetry, Head Off & Split, is a National Book Award Winner.

Finney and her work have been featured on Russell Simmons DEF Poetry (HBO series), renowned chef Marcus Samuelsson's feature The Meaning of Food (a PBS production) and National Public Radio. Her work has been praised by Walter Mosley, Nikki Giovanni, Gloria Naylor and the late CBS/60 Minutes news anchor Ed Bradley. Finney has held distinguished posts at Berea College as the Goode Chair in the Humanities and Smith College as the Grace Hazard Conklin Writer-in-Residence.

Finney is currently a Professor of English and Creative Writing at the University Kentucky. She is a founding member of the Affrilachian Poets

Start reading Head Off & Split: Poems on your Kindle in under a minute.

Case Quarter
VINE VOICE
5.0 out of 5 stars there comes a time
Reviewed in the United States on April 20, 2017
Verified Purchase
nikky finney captures a fierce i’m-not-the-one-to-mess-with tone, learned as much from the tough girls, the bad girls, as from rosa parks in Red Velvet:

‘A girl in the crowd, taught not to
shout, shouts, “Oh! She’s so sweet-looking! Oh!
They done messed with the wrong one now.”

You cannot keep messing with a sweet-looking
Black woman knows her way around velvet.’

poems about other black women not to mess with in this book who had their moment of media attention are condoleezza rice and wilma rudolph.

these are poems of the south, stories from louisiana of floods, church bombings in alabama, strom thurmond’s black children in south carolina, a solitary artist in kentucky and the woman who drove across five states to be with her.

these are poems about enduring until one knows what one needs to be known so as not be messed with. in Red Velvet:

‘The Montgomery seamstress waits and waits for
the Cleveland Avenue bus. She climbs aboard,
row five. The fifth row is the first row of the Colored
section. The bus driver, who tried to put her off that day,
had put her off twelve years before. But twelve years
before she was only twenty-eight, still a child to the
heavy work of resistance.’

finney’s velvet is fish. she tells the story of her journey, beginning from the days before she learned the lessons for the day she would buy her own fish whole and grip a knife for the heavy work. her metaphor testifies to the heavy work accomplished to write the way she does.

these are poems about leaving and returning, and standing ground, and about staying when the ground is washed away from underfoot and why leaving isn’t an option. there’s nothing easy about these poems, which is why they should be read.
Read more
Helpful
Report abuse

Jessica Dunker
5.0 out of 5 stars I thoroughly enjoyed this politically enticing collection
Reviewed in the United States on November 28, 2017
Verified Purchase
I thoroughly enjoyed this politically enticing collection. Throughout Nikky Finney’s poetry in Head Off & Split, each poem is narrated through Finney’s own perspective as a black woman. By Finney’s descriptions and themes, Finney reveals her dedication not only to African-Americans, but to women as a whole.
In Finney’s first section of poetry, labeled “The Hard - Headed,” Finney dedicates poem “Red Velvet” for Rosa Parks and the strength it took her as a black woman in segregated America to take a stand for all black people in the nation. Finney says,
“Arching herself over a river of cloth she feels for the bias,
But doesn’t cut, not until the straight pins are in place,
Marking everything; in time, everything will come together” (“Red Velvet,” ii.,
4-6).
In “Red Velvet,” Rosa Parks is a 42-year-old seamstress, a hardworking woman who provides her skills to “well-meaning white women / in Montgomery” (“Red Velvet, iii., 25-26). By the subtle line, “in time, everything will come together,” (6) Finney understands the slow progression a nation takes to gain rights and equality in a nation historically marked with oppression. She also notes Rosa Parks’ demeanor not as someone who intends to build on a movement, but she goes about her daily routine like any other woman. Through Finney’s description of Rosa Parks, readers understand it only takes one person to change a movement, despite what profession s/he may be in or who s/he is among the community. Since Finney herself is contributing to black women’s rights, Finney may be comparing Rosa Parks to the importance of a movement’s continual progression.
In Finney’s second section of Head Off & Split, “The Head - over - Heels,” her poems place an emphasis on gay, black women, saying, “I stop my hand midair // If I touch her there everything about me will be true” (“The Aureole” 1-2). Finney reveals the character’s sexuality through the hesitancy in expressing the feelings the narrator has for this other woman. Finney’s usage of hesitation is due to Appalachian society’s expectations, including gender roles and family ties. The latter can be seen in the poem “Head Off & Split,” for which her book is named. She says the title is based on how a “fish” comes naturally compared to how the “fish” is prepped before going home. In “Head Off & Split” Finney says, “I am head off and split,” (iii. 26). She must take out the incomplete parts of herself for an acceptable presentation, but really she would rather take the fish home untouched, complete and whole.
Head Off & Split is socially and politically challenging in every way, bringing forth themes of African-American history, the role of a new generation, and the plain and inexplicable human nature of life and love. In her last poem, Finney makes her stance clear on black rights and women’s rights by saying, “Careful to the very end what you deny, dismiss & cut away” (“Instruction, Final: To Brown Poets from Black Girl with Silver Leica,” 15-16).
Read more
Helpful
Report abuse

Though not my favorite book of contemporary poetry from the last five years, Head Off & Split examines such variable aspects of family life and sexuality that it's impossible to undercut its awareness of its writer's identity. Political poems are far from my favorite, and I could well do without the Condoleeza suite, but Nikky Finney knows who she is as a poet and a person, and the book shows it.
Read more
Helpful
Report abuse

Amazon Customer
5.0 out of 5 stars Phenomenal book!
Reviewed in the United States on June 7, 2017
Verified Purchase
Wonderful purchase, book, and woman. Dr. Nikky Finney never disappoints. Her book opens the depths of your heart. She has a way of reaching you with every word, every line, and every moment. This was just what I needed. If you are looking for inspiration and thorough writing, this is for you! Please, take it upon yourself to enjoy her work!
Read more
Helpful
Report abuse

Stymie26
5.0 out of 5 stars Five Stars
Reviewed in the United States on August 3, 2017
Verified Purchase
Was for a school project.
Read more
Helpful
Report abuse

Evelyn
5.0 out of 5 stars Great book
Reviewed in the United States on September 19, 2019
Verified Purchase
Great book! I needed it for a class and winded up sharing it with other people
Read more
Helpful
Report abuse

Robert L. Miller, Jr.
5.0 out of 5 stars Head Off and Split Wonderful title
Reviewed in the United States on March 21, 2014
Verified Purchase
Ms. Finney so gracefully title this collection of poetry. Her work in this book is a continuing wonderful trek of thought provoking poems.
Read more
Helpful
Report abuse
See all reviews

DavidR2k
5.0 out of 5 stars Simply brilliant
Reviewed in the United Kingdom on August 7, 2012
Verified Purchase
This collection of poems transcends race, nationality and gender whilst being firmly rooted in African American culture and experience. As a white, middle-class, middle-aged, British male I was moved, uplifted and angered. If you need to be further inspired to buy this book then simply look at the author's acceptance speech at the 2011 National Book Award in Poetry [...], you will never hear a better address.
Read more
One person found this helpful
Report abuse
See all reviews