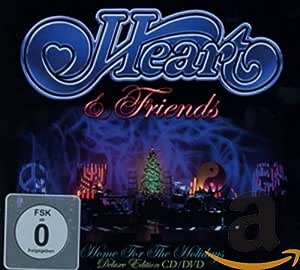 Hearts Ann and Nancy Wilson returned to their hometown of Seattle to stage a celebration of the Christmas season, gathering a few of their friends to join them in singing holiday classics, personal favorites and some of their own hits. Special guests Shawn Colvin, Sammy Hagar, Richard Marx and Pat Monahan from Train joined Heart for this once-in-a-lifetime concert, which was taped on Dec. 12 2013 at the beautiful Benaroya Symphony Concert Hall in Seattle. The Wilson sisters performed an array of holiday songs written by Joni Mitchell, Harry Nilsson, Bob Dylan and Hagar in their Christmas set as well as some of Hearts favorite songs. Colvin, Hagar, Marx and Monahan provided additional vocals on the tunes and/or sing duets with Heart.

4.5 out of 5 stars
4.5 out of 5
112 global ratings
How are ratings calculated?
To calculate the overall star rating and percentage breakdown by star, we don’t use a simple average. Instead, our system considers things like how recent a review is and if the reviewer bought the item on Amazon. It also analyzes reviews to verify trustworthiness.
Top reviews

Debbi Owen
4.0 out of 5 stars Review
Reviewed in the United States on September 12, 2015
Verified Purchase
My husband and I have both enjoyed listening to and watching this CD and DVD. Ann's performance of "Stairway" isn't quite as explosive as when she performed it as part of the tribute to Led Zeppelin, BUT she sang it at the very end of this Seattle concert... and how could ANYone outdo the magic created during the 2012 tribute with so many talented band members (and choirs), including John Bonham's son Jason on drums, anticipation and emotions running high—video so astutely panning to showcase Robert Plant's, John Paul Jones' and Jimmy Page's raw reactions. I would still buy this album, solely for the fact I loved Heart back in the day and I still love them. Debbi Owen
Read more
7 people found this helpful
Helpful
Report abuse

Nikki Colton
5.0 out of 5 stars Ordered as a gift!
Reviewed in the United States on February 1, 2016
Verified Purchase
I have not personally listened to this, but I got it as a Christmas gift for my mom and all I can say is that it made her extremely happy! So that deserves 5 stars in my opinion! :)
Plus, since I ordered this, Amazon sent me a free link so that I can listen to the music online at any time for free! So that is a nice perk, just in case I want to play it! :)
Read more
2 people found this helpful
Helpful
Report abuse

Evan McGuire
5.0 out of 5 stars Other than that this set is great!
Reviewed in the United States on January 13, 2015
Verified Purchase
What can you say, it's Heart! After all these years the Wilson sisters still rock even when doing Christmas music. My only gripe is one song is on the CD but is not on the concert DVD. Other than that this set is great!
Read more
2 people found this helpful
Helpful
Report abuse

Paul Madigan
3.0 out of 5 stars Three Stars
Reviewed in the United States on October 21, 2016
Verified Purchase
Worth the price for the "Stairway To Heaven" cover.
Read more
One person found this helpful
Helpful
Report abuse

Darrell Lloyd
5.0 out of 5 stars Heart For The Holidays
Reviewed in the United States on March 2, 2018
Verified Purchase
Christmas with Ann, Nancy and their talented friends....what could be better?
Read more
Helpful
Report abuse
See all reviews

Peter N. Ingleby
4.0 out of 5 stars Too much of the friends and not enough Heart
Reviewed in the United Kingdom on May 23, 2015
Verified Purchase
This isn't a bad show but there is little too much of the friends and not enough Heart. Which is a pity because Ann and Nancy were on great form and appear to be enjoying themselves. Ann's vocals on Stairway to Heaven are simply heavenly and clearly demonstrate why she has the reputation of being one of rocks greatest voices. Almost worth the cost for the blistering performance of Barracuda which shows just why Heart where so successful and why they are still one of the best bands around.
Read more
4 people found this helpful
Report abuse