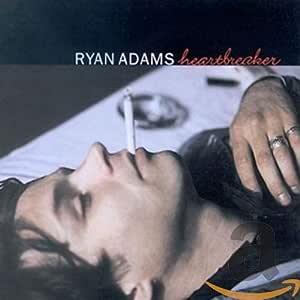 Ryan Adams Format: Audio CD
4.4 out of 5 stars 49 ratings
Amazon's Choice recommends highly rated and well-priced products.
Amazon's Choice for "ryan adams cd"
See all 3 formats and editions Hide other formats and editions
Includes FREE MP3 version of this album.&nbspProvided by Amazon Digital Services LLC. Terms and Conditions. Does not apply to gift orders.&nbspComplete your purchase to save the MP3 version to your music library.
Available at a lower price from other sellers that may not offer free Prime shipping.

Finally back in print on CD and Vinyl formats on PaxAm Records, 2000's Heartbreaker is the debut solo studio album by Ryan Adams. The album was produced by Ethan Johns and features now-classic Adams tracks "Come Pick Me Up" and "Oh My Sweet Carolina" (among others).

4.4 out of 5 stars
4.4 out of 5
49 global ratings
How are ratings calculated?
To calculate the overall star rating and percentage breakdown by star, we don’t use a simple average. Instead, our system considers things like how recent a review is and if the reviewer bought the item on Amazon. It also analyzes reviews to verify trustworthiness.
Top reviews

Marc D. Mable
5.0 out of 5 stars Must Buy!
Reviewed in the United States on January 9, 2018
Verified Purchase
I know Ryan Adams is a musicians musician and a critic favorite, but frankly he has never been fully on my radar - my mistake. This is an awesome album!
Read more
Helpful
Comment Report abuse

TC
5.0 out of 5 stars A Must Have Album
Reviewed in the United States on May 13, 2016
Verified Purchase
The album that introduced me to Ryan Adams, and still my favorite of all his stuff. It's impossible not to dig this album.
Read more
3 people found this helpful
Helpful
Comment Report abuse

southernreader15
5.0 out of 5 stars Buy this record now!!
Reviewed in the United States on September 2, 2015
Verified Purchase
This is one of my favorite albums of all time. I love every song on it. The 180 gram vinyl is a nice quality too!! If you've never heard this record, don't listen to it first, just click buy now!!!
Read more
2 people found this helpful
Helpful
Comment Report abuse

mario
5.0 out of 5 stars Five Stars
Reviewed in the United States on November 5, 2016
Verified Purchase
Over the years, have always come back to this record.
Read more
Helpful
Comment Report abuse

kenneth h. gonzalez
5.0 out of 5 stars Five Stars
Reviewed in the United States on May 3, 2016
Verified Purchase
came in as stated and in the condition stated as well. will order again.
Read more
Helpful
Comment Report abuse

Anette Bregi
5.0 out of 5 stars A classic
Reviewed in the United States on October 17, 2016
Verified Purchase
As good as expected. The only issue I had was when I put the CD's on my Itunes, the outtakes CD didn't show any song titles or artists name and thus doesn't immediately follow the album in my library.
Read more
Helpful
Comment Report abuse
See all reviews

For Tomorrow
5.0 out of 5 stars Ryan's acclaimed, heartfelt debut album
Reviewed in the United Kingdom on February 27, 2017
Verified Purchase
In 2000, Ryan Adams won much critical acclaim following the release of his debut solo album 'Heartbreaker', which many fans and critics still consider his best work after the stacks of prolifically released records which have since followed.

Produced by Ethan Johns (who has worked with artists as diverse as Kings of Leon, Paul McCartney, Tom Jones and the Vaccines), this is an alternative-country music affair, said to have been inspired by Ryan's breakup with girlfriend Amy Lombardi (listen, or just at look at the title of track four to see why), and a very heartfelt, sincere collection of songs which all flow really well, and each one is placed perfectly.

The aforementioned track 'AMY' is one of the most touching songs about yearning for a former partner that you'll probably ever hear, but is just one of several highlights. 'Oh My Sweet Carolina', a truly beautiful song about feeling homesick is easily among the best of Ryan's many emotional songwriting victories, and 'Come Pick Me Up' and 'In My Time of Need', later covered by Joan Baez also stand tall.

With the release of 'Heartbreaker', Ryan Adams, whose fans base continues to grow all of the time (his most recent album 'Prisoner' has become his highest charting in Britain, going straight into the charts at no.3!), established himself as a first rate singer-songwriter. Here we can make comparisons to somebody like Bob Dylan (see the track 'To Be Young (Is To Be Sad, Is To Be High)'), or Nick Drake especially, and not the popular rock singer who goes by a very similar name, but is a completely different musician.

Ryan's soft yet powerful and always assured vocal delivery on his confessional, straight-from-the-heart songs, mixed with the beautiful stripped-back music craftsmanship behind him, is truly something. When this man writes and sings his tales of despair, pining, and loneliness, you just know without question that he means and feels it. 'Heartbreaker' remains a masterpiece, and no self-respecting fan should be without it.

This 2015 re-issue benefits from remastering.

Toddy
5.0 out of 5 stars Superb Ryan as ever
Reviewed in the United Kingdom on September 8, 2019
Verified Purchase
Excellent Americana
Read more
Report abuse

Page 1 of 1 Start overPage 1 of 1
This shopping feature will continue to load items when the Enter key is pressed. In order to navigate out of this carousel please use your heading shortcut key to navigate to the next or previous heading.
Back
Next
Pages with related products. See and discover other items: country records, heart music