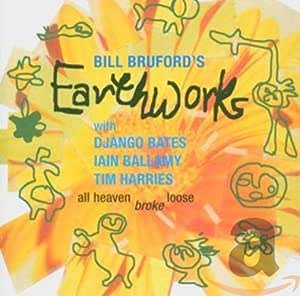 This recording of All Heaven Broke Loose has been re-mastered and includes two bonus tracks 'Libreville' & 'Pilgrim's Way'. The album comes re-packaged with a bonus CD containing 'Introduction To Winterfold' and an exclusive interview with Bill Bruford. Summerfold. 2005.

Kim Fletcher
5.0 out of 5 stars All Mott Broke Loose
Reviewed in the United States on May 26, 2006
The oldest joke in music is: "Question: Who do you often see hanging around with musicians? Answer: Drummers!" Well, the leader of Bill Bruford's Earthworks has certainly gone a long way to disproving this old joke. Mr. Bill Bruford cut his teeth playing in many British blues boom band's in the mid Sixties including for one gig Savoy Brown, although his primal influences were the great jazz drummers of the time like Art Blakey. But finding that most bands expectations of a drummer were simply to count them in and keep time, Bill Bruford took a look around to find something a little more ambitious. This desire was fulfilled when he joined the formative `Yes' in 1968 with Peter Banks on lead guitar, Chris Squire on bass, Jon (then known as John) Anderson, and Tony Kaye on keyboards. Bill Bruford stayed with `Yes' through various line-up changes, and five albums, quitting for the first time during the recording of Yes's triple live album `Yessongs' to be replaced by Alan White.

Bill Bruford had been enticed away from the secure and lucrative drum stool of `Yes' to throw his lot in with Robert Fripp who had a desire to kick start `King Crimson' again. This was to prove to be the first of a trend where Bill Bruford would follow musical challenge, instead of financial security. During his time with Yes the great Buddy Rich had become an admirer of Bill Bruford's drum technique, there being no higher accolade in the drumming world.

The new King Crimson was a powerful and unique outfit, featuring Robert Fripp on lead guitar, John Wetton on bass and vocals (who came in from Family, and when King Crimson fell apart went onto put the bass in Uriah Heep before joining up with Bill Bruford again, and then hitting pay dirt with Asia), the completely unknown, but extraordinarily talented David Cross (who was a multi instrumentalist), for the first album the avant-garde percussionist Jamie Muir and for the final album Ian Macdonald. This version of King Crimson released three seminal studio albums Larks Tongue in Aspic (1973), Starless and Bible Black (1974), and a live album U.S.A. (1975). But to hear Bill Bruford in all his glory in this era, get the 4 CD the Great Deceiver, a selection of cuts from concerts from an American tour with the whole band at the height of their powers.

When King Crimson fell apart Bill Bruford quickly found a place in the line-up of National Health, a group formed out of the ashes of Canterbury sound band Hatfield and the North. In their ranks were Phil Miller on lead guitar, Richard Sinclair on keyboards and later Neil Murry on bass, Bill Bruford also moonlighted with teapot rockers Gong during this time, but not before he had recorded two albums with Roy Harper, HQ and When a Cricketer Leaves The Crease, both recorded in 1975. Bill Bruford also went out on the road with Roy Harper's Band which included Chris Spedding on lead guitar. Over the years Bill Bruford has appeared on too many album sessions to mention in this review.

At this time Peter Gabriel had just left Genesis after their Lamb Lies Down On Broadway tour. Instead of finding a new singer they simply moved the young drummer Phil Collins from behind his drum kit to front of stage to sing the songs. The trouble was, who was going to hit the skins? Phil Collins (no mean drummer himself) announced that the only drummer in the world he would feel happy with deputizing for him was Bill Bruford, so from March to November of 1976 Bill Bruford found himself as part of the tour band for Genesis. His contribution to Genesis can be heard on the live double album Seconds Out, not for the last time Bill Bruford found himself in a band with two drummers, when Bruford and Collins found themselves behind their separate drum kits at the same time, it was a mighty sound.

But this was not a permanent arrangement, so when the suggestion was made to form a new super group with like minded old pals Allan Holdsworth on guitar, John Wetton on bass, and multi instrumentalist Eddie Jobson, fresh from his stints with Frank Zappa and Roxy Music, the idea was put into motion and U.K. was formed. But after one great self titled album, divisions formed; Allan Holdsworth and Bill Bruford went off and formed Bruford for a couple of years, whilst the other two carried on with U.K. replacing Bill Bruford with another ex Zappa man Terry Bozio.

Then in 1980 the mighty King Crimson raised its mighty head again and Bill Bruford joined the ranks for another four year successful journey. Then to add another branch between the two supergroups Yes and King Crimson, Patrick Moraz, the new Yes keyboard player left, and Bill Bruford left King Crimson to form Moraz / Bruford from 1984 -1986. After this Bill Bruford formed the first version of Earthworks with Django Bates and Iain Bellamy, allowing Bill Bruford to get back to his jazz roots.

In 1986 Bill Bruford was asked to come back to the Yes camp (well sort of) to record an album with Jon Anderson, Rick Wakeman, Steve Howe and himself. This was fine but they were not allowed to use the Yes name, so the album was released under their own names Anderson, Bruford, Wakeman, and Howe (1988). Supplemented by auxiliary members Tony Levin (the bassist from Bruford's King Crimson Days!), Milton MacDonald on rhythm guitar and Julian Colberg on additional keyboards for the supporting tour. They could not use the Yes name as there was still a band called Yes led by original Yes bass player Chris Squire. Then in a moment of sheer madness the management of all the members of both bands decided it would be a good idea to combine both bands and record another album Union (1990) and go back out on tour with all the musicians. That means the aforementioned musicians and Chris Squire, Alan White, Trevor Rabin, and Tony Kaye. (That's right, eleven musicians on one stage!) This meant that Yes went out with every member of the band there had ever been except for poor old Peter Banks. This was obviously an unmitigated disaster and Bill Bruford fulfilled his contractual obligations and fled.

Bill Bruford quickly got Earthworks back on the road and regained his sanity. Then for the third time, Robert Fripp and his King Crimson came an asking. Bill Bruford found King Crimson in its double trio format of two drummers, two bassists and two guitarists on the same stage. This time it worked and from 1994 to 1997 King Crimson toured the Earth and neighbouring planets to great critical acclaim, releasing live albums and DVDs.

But then the call of Earthworks became too much again, and Bill Bruford for the last time left King Crimson to put together a new Earthworks in 1998. There have been a few comings and goings in the line up as the band found their feet, but they have now settled on a comfortable stable line up of Tim Garland on sax and flute, an incredibly talented player and composer who has become Bill Bruford's partner in the band and is best known before for his association with Chick Corea.